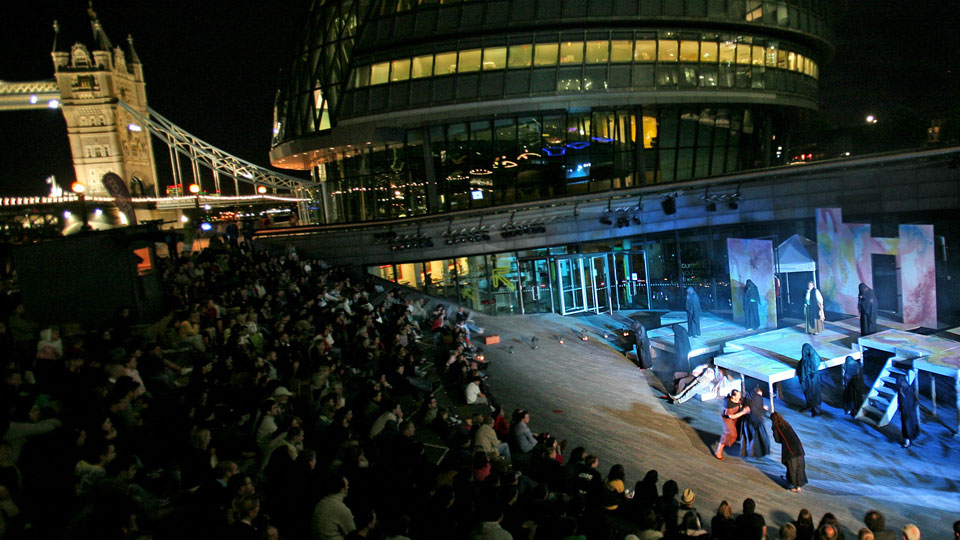 This year marks the 11th anniversary of Free Theatre in the stunning Greek Amphitheatre setting of The Scoop at More London on the banks of the Thames, right by City Hall.

The Thebans is directed by Phil Willmott, and involves two fully-staged productions inspired by the ancient Greek city of Thebes.

Performance dates for this year are 7 August – 1 September, with shows on Wednesdays – Sundays.

Winner of a Peter Brook award for innovation, this season of completely free theatre is now firmly established as one of London’s annual theatre-going must-sees.

There’s no need to book – just turn up and take a seat! There’s room for 1,000 people at each performance.

Prince of Thebes (6pm)
Aimed at a family audience and those encountering Oedipus for the first time our irresistible blend of comedy, adventure, music and puppetry will introduce you to the young Prince as he thwarts magical and mortal enemies in his quest to lift an evil spell. Prince of Thebes is written by Phil Willmott.

As twilight gathers, older audiences are invited to discover the terrible fate of the adult Oedipus and his children in a vivid new production combining two masterpieces by Sophocles. Chronicling the downfall of the Theban Royal family this epic story of a proud father and daughter battling the gods for survival echoes down the centuries and asks us to consider the role destiny plays in all our lives. Oedipus and Antigone are presented in a new translation by Lisa Kuma.