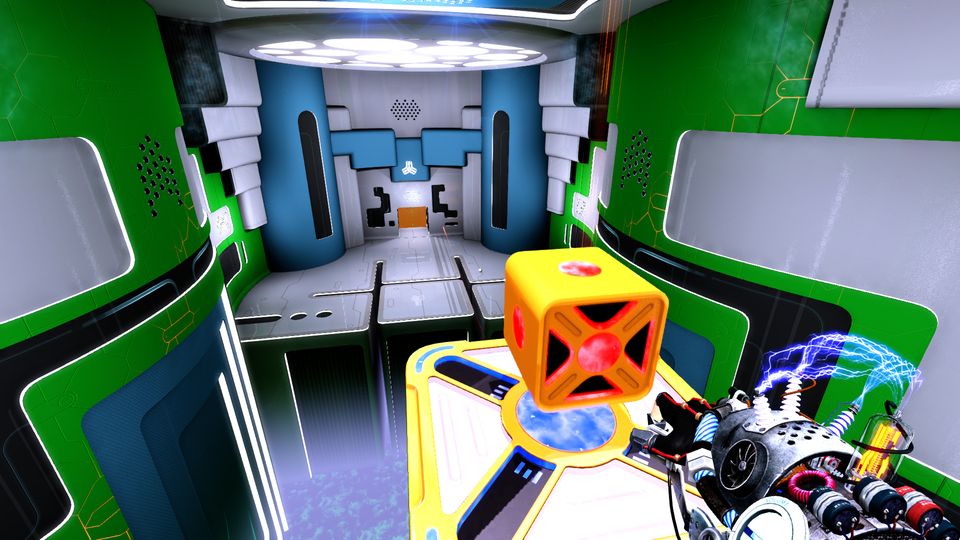 Magrunner: Dark Pulse is a puzzle-action game that is heavily inspired by Valve’s Portal. The game is published by Focus Home Interactive and developed by 3AM Games (Frogwares). It’s out now on Steam for PC and will also be released on XBLA and PSN in September this year. After enjoying ourselves in the beta preview we’d been looking forward to playing through the final game.

The story is set in the future, in the year 2050, in a world where advanced technology is mixed with H.P. Lovecraft’s Cthulhu Mythos. The powerful Gruckezber Corporation has created a social network called LifeNET which has connected everyone on the planet. Their latest venture is the development of a new, clean source of energy called Mag technology. They plan to use it to power deep space exploration allowing humanity to spread across space.

They plan to recruit astronauts from the populace and so set up a special training facility to vet the potential candidates. You play as Dax Ward, a gifted orphan, who is amongst the Gruckezber candidates known as Magrunners. Dax is also helped along by his mutant friend Gamaji and eventually his robot dog Newton.

Candidates must take part in the Magtech deep space exploration program which is held at a Gruckezber facility. This features a series of training rooms designed to test the candidates Magtech knowledge. The training room setup all feels a lot like Portal where you enter a room then solve a series of puzzles in order to access the exit. Instead of a portal gun Dax is armed with a Magtech glove.

The Magtech glove is able to polarize objects with a red or green magnetic charge via the left and right mouse buttons. Items you can polarize are easily identified and they glow the colour of the charge you give them. In the levels we played there were cubes, platforms and boost pads to charge up. You can also remove the charge an object has to kill the magnetic field.

The puzzles are all based around how magnets and magnetism works. Give two objects the same charge and they will attract or opposite charges will repel. The type of object affects the type of magnetic field that it gains. Objects such as cubes gain a spherical field and laser paths for platforms a cylindrical field. Pressing the F key allows you to view all the magnetic fields so that you can see which objects affect each other. Combining objects with the same charge also boosts their combined magnetic field.

These simple mechanics are easy to learn but provide you with a surprising number of possibilities. For example you can stand on a platform and give it the same charge as the end point to move towards it or the opposite charge to move away. You can give a cube a charge and then move a platform past it to pick it up. Cubes can also be used to get around so you can stand on one on top of a boost pad and then give it the opposite charge to fly into the air. Mirrors also make an appearance so you can fire at objects around corners.

The levels start out easy but soon become complex and require some head scratching and trial and error to get right. The game also requires some careful movement and platform jumping to get around. It’s quite common to miss a jump and have to repeat sections over until you get it right which can become frustrating.

The game is powered by the Unreal 3 engine and everything looks great. The test rooms all have a really clean sharp look about them with great use of colour. The floors are super shiny allowing you to see the environment reflecting in them. As the game progresses things predictably go bad and the story becomes darker, environments become creepier and there are monsters to contend with too.

Magrunner: Dark Pulse will keep most players busy for at least 10 hours on their first playthough. There’s a decent story behind it, lovely graphics and satisfying puzzles. If you’re a fan of Portal then you’ll find plenty to enjoy in Magrunner: Dark Pulse.