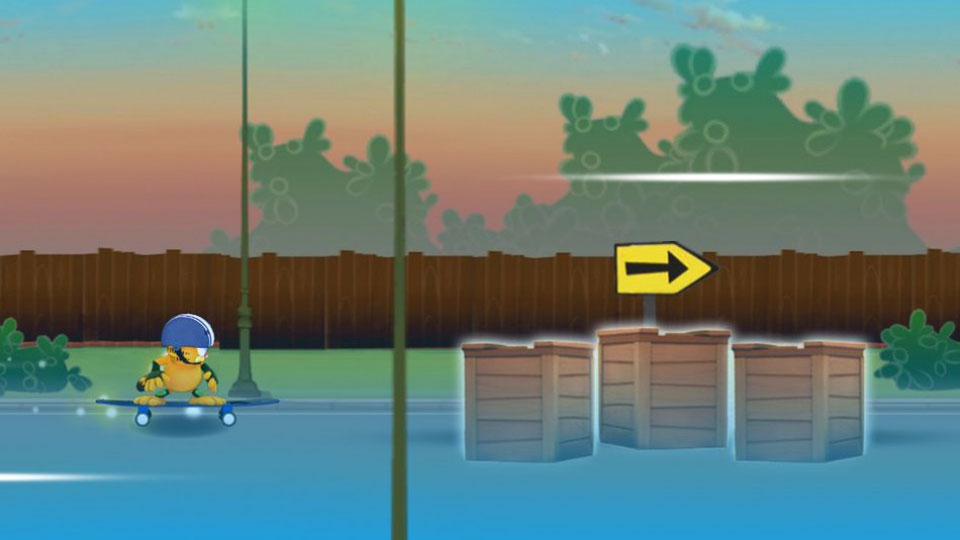 Garfield has been around since 1978 and since that time the character has become an icon across the world. Loved by kids and adults alike, the lasagna loving sleepy cat is still wildly popular and pops up in various guises. For his latest outing Garfield is starring a brand new iOS game called Garfield’s Wild Ride.

In Garfield’s Wild Ride you must navigate the loveable cat through a busy street filled with obstacles and various enemies e.g. cars, witches, UFOs. The main purpose is to complete three missions for each level. These are all pretty arbitrary and get progressively harder. Missions include things like running a certain amount of metres, using power-ups that can be collected (and are present sparsely) throughout the level and collecting a set amount of coins. Sometimes you have to play the levels over and over again before you can complete the missions.

You put your finger on the touchscreen to lift Garfield into the air and lift it off in order to bring him back down to the ground. You have to do this continuously to avoid crashing into things and achieve the furthest distance you can. It’s a simple and effective control system and easy enough to get to grips with quickly.

Once you’ve played through the game several times and collected a decent amount of coins you can go to the shop and redeem them for items. These include headwear, clothes, special FX and themes. You can also unlock trophies by trading in lasagna and in return you get gold Garfield statues. To be honest they aren’t all that exciting and it takes some serious work to collect enough lasagna to even get one trophy.

Despite showing initial promise it soon becomes clear that main purpose of Garfield’s Wild Ride is to get gamers to part with as much money as possible. The game comes only with one theme, unlocking additional ones will cost you 100,000 coins. It would take some real perseverance to amass that amount by playing through the levels (all based around the street theme) but gamers can buy them through the app. Costing between 69p and £8.99 you can buy packs of coins so you can buy items and themes. That’s pretty expensive really.

Garfield’s Wild Ride is a game that could have been much more. For your 69p we would have expected at least a couple of themes for the levels but sadly the focus here seems to be making as much money out of the gamer as possible. It’s likely most gamers will give up before they collect the amount of coins needed to unlock the many items and themes on offer. It’s such a shame because visually the game looks great and it’s actually a whole lot of fun. Unfortunately it’s just very limited if you don’t want to spend money or hours working through the same level over and over again.

In this article:Garfield, Garfield's Wild Ride