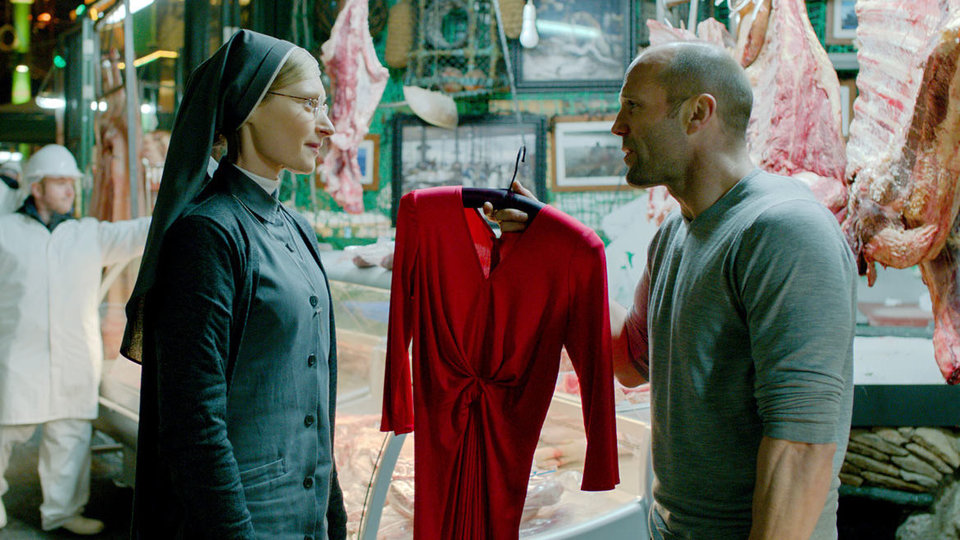 Joey (Jason Statham – The Transporter) lives on the streets. In hiding from a military court martial, the former soldier now tries to survive the bleak streets of London, homeless and without money. After a savage beating by some of the capitals murkiest underworld criminals, Joey manages a chance escape. Seeking refuge in a swish London apartment whilst the owner is out of town, Joey has a few months to get himself back into a fit state. He also begins working for the Chinese mob in order to make some fast cash so he can leave this life behind once and for all. But his situation complicates when a former friend named Isabel (Victoria Bewick – The Iron Lady) goes missing and Joey starts an unlikely friendship with Cristina (Agata Buzek – In The Bedroom), a nun who runs a soup kitchen.

Writer/Director Steven Knight, whose past credits include Dirty Pretty Things and Eastern Promises, delivers a wonderfully absorbing drama full of tact and verve with Hummingbird. The dramatic side of things pack a powerful and emotional punch with the action also hitting all of the right notes. There’s even a subtle level of humour that compliments the script very well. Hummingbird is a film that transcends one genre and works equally well as a harrowing tragedy, a crime thriller, a revenge story and even a romantic drama.

Jason Statham hands in the performance of his career in Hummingbird. The go-to guy for action and adventure is finally given a project that demands more from him as an actor. Whilst he undoubtedly excels at blockbuster spectacle like The Transporter and The Expendables, this project gives Statham a decent drama that flexes his acting muscles just as much. Taking Statham out of his comfort zone completely, Hummingbird demands a lot from the actor but he delivers at every single turn.

Audiences expect a certain element to be present when they go to see a Jason Statham movie and this is something the actor himself freely admits to and embraces. But that’s not to say that he is a one-trick pony. His CV lays testament to the fact that the guy can act. He just needs the material and the opportunity to branch out. Hummingbird provides this opportunity for Statham to hand in a mesmerizing performance full of angst and regret. It’s the finest role he has ever delivered and should rightly force people to address their preconceptions about Statham as an actor.

He is given amazing support from Agata Buzek as Cristina. The central relationship between Joey and Cristina could very easily have been overplayed but the clever script always keeps things believable and bittersweet. Every hopeful moment they share is tinged with elements of their troubled past. Culminating in a beautiful and bittersweet moment in a London street after-hours, it features Buzek delivering a wonderful monologue about how she wished her life turned out. It’s a wonderfully paced moment, shot elegantly and fully embracing of the beauty of London after dark.

Hummingbird is a drama first and foremost but there is still a decent amount of combat in the movie, however it never feels gratuitous or sensationalised. The scene where Joey asks a group of football fans to leave a Chinese restaurant is perfectly played out and never oversteps its mark. Joey is also seen as a fragile man, someone who isn’t untouchable and who can break. All of the violence in Hummingbird stems from real situations. This, in turn, makes the story both rewarding and believable and takes the viewer on an empathising journey beyond the glamour and bright lights of the capital.

Having the film set against the beautiful and broken landscape of central London is a master-stroke. This is London as Londoners know it and features so many iconic landmarks for city-dwellers to revel in. Oxford Street, Leicester Square, Soho and Covent Garden are just some of the locations that give Hummingbird an urban fairytale feel. Throw in some great cinematography and you have a tragic but stunning canvas for this story to come alive in. The soundtrack deserves special mention too with an eclectic mix of haunting scores that mirror the central themes of the film very effectively.

Hummingbird is a study of broken dreams and second chances. The horrors of living with guilt and bad choices and how you deal with the constant struggle of life. Above all, Hummingbird is a story about one man’s road to redemption. This may not be a happy story but it’s a poignant and powerful one that delivers on every count. Hummingbird may be the best surprise hit of 2013 so far and is easily one of the finest films of the year if you are willing to give this a chance.

Jason Palmerhttp://www.entertainment-focus.com
Jason is a film contributor for Entertainment Focus (EF) bringing you the latest news and reviews from the movie world.
Previous article
The Man Who Finally Died DVD review
Next article
New UK trailer for Only God Forgives

‘Doctor Strange in the Multiverse of Madness’ review