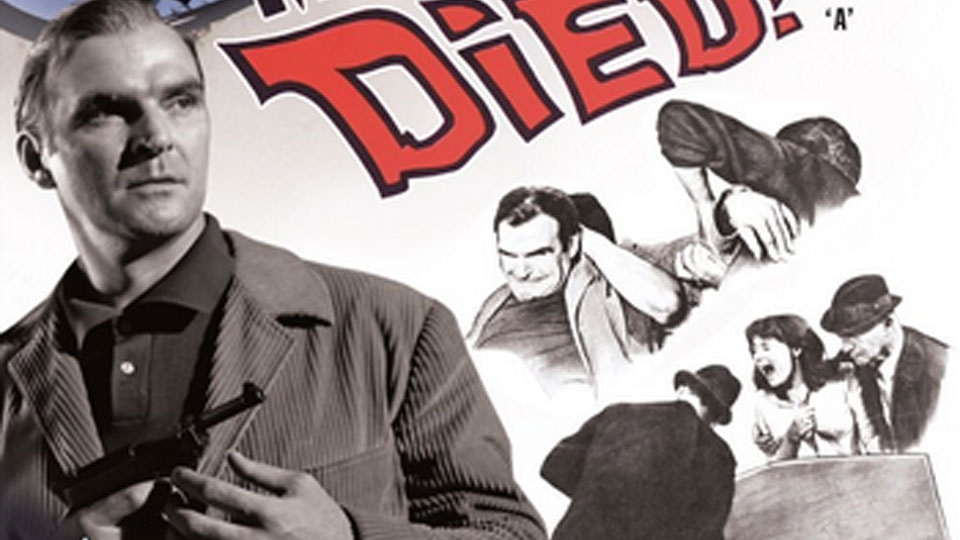 Stanley Baker would have been a brilliant choice to originate the role of James Bond. The Welsh film star, best-remembered for Zulu, plays the lead in The Man Who Finally Died, a film noir-ish thriller from 1962, the same year Dr No hit the screens. With his angular face and saturnine, scowling good looks, Baker was the epitome of British cool in the early 1960s. His relatively early death, aged only 48, was too old for the glamour of dying young, and so his name has sadly, almost forty years after his untimely passing, been dwarfed by his surviving contemporaries.

Taking another look at The Man Who Finally Died is a reminder of how good an actor and leading man Baker was. Decked out in Italian sunglasses for much of the movie, and playing the wronged ordinary guy with his usual mixture of intelligence and anger, Baker’s contribution to British film oughtn’t to be overlooked, and surely a thorough biography is long overdue?

Stanley Baker plays Joe Newman, an English jazz musician who receives a mysterious phone call. Apparently his father, believed to have been killed two decades earlier, is alive and well in a small Bavarian town. Newman heads to Germany to look for his father, and suspects the locals are involved in a conspiracy of silence to hide the truth about what happened to him and where he is now.

With WWII a recent memory, and a refugee camp on the borders of the town, old hostilities and distrust quickly surface; and the more Newman uncovers, the more noses he puts out of joint. The dark shadow of the war is a successfully used backdrop, since Newman himself is German-born but now a British citizen, having changed his name from the obviously Teutonic ‘Deutsch’, and contemporary viewers would have lived through the period too and thus this presentation of the complexities of post-wartime morality would have resonated deeply.

Starring alongside Baker in this stylish thriller is cult favourite Peter Cushing, whose turn as Dr. Von Brecht is as classy and impeccably mannered as you’d expect. Von Brecht is a fascinating character, and you’re never quite sure if he’s decent, or retaining a hankering for his Nazi past behind his clipped and cool exterior. The film is worth seeing just for Baker and Cushing appearing on screen together (reunited after 1958’s Violent Playground).

The Man Who Finally Died marks the big screen debut of Georgina Ward, who plays the young love interest for Baker; though her part is also pleasingly written with shades of grey that befit the noir-ish genre, so she’s given plenty of material to get her teeth into. Ingmar Bergman-favourite Mai Zetterling also features, seen here playing Baker’s young step-mother.

The Man Who Finally Died is shot on crisp black and white and looks tremendous restored to its original cinematic format and tidied up for this DVD release. The film is fairly short, but contains enough twists and intrigue to keep you guessing and ultimately hooked, and a thrilling conclusion on a high speed train that more than satisfies the mysteries set up at the start.

Ultimately, The Man Who Finally Died is something of an overlooked near-classic. Stanley Baker’s lead performance is enough of a selling point on its own.

The Man Who Finally Died is released as part of Network’s ‘The British Film’ collection.

Win The Smallest Show on Earth on Blu-ray