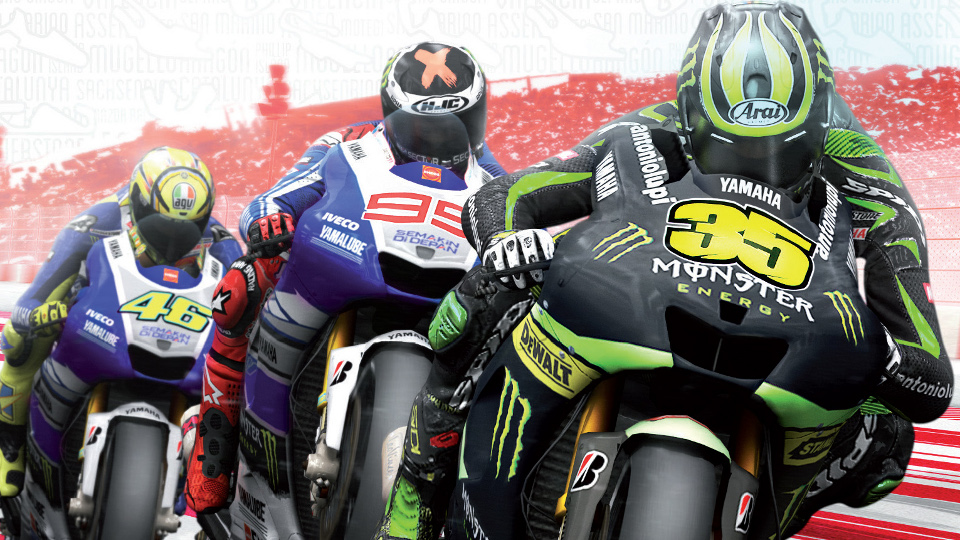 We were never really all that interested in MotoGP until we got our hands on the original Xbox LIVE starter kit back in 2003. Included with the bundle was a game disc with a LIVE enabled demo of MotoGP. It was the first title we ever played on the service and we were hooked. It’s now 10 years later and we still get excited about a new MotoGP game and it’s all thanks to that first demo. We’ve been spending some time with MotoGP 13 on Xbox 360 to see what it has to offer.

Just incase you didn’t know MotoGP is based upon the real life sport of motorcycle road racing. MotoGP 13 is actually the offical game of the MotoGP Championships and features all the contents of the 2013 Championship. This includes the MotoGP, Moto2 and Moto3 riders, teams, circuits and rules.

When you fire the game up you are presented with six different modes of play. These are Instant Race, Grand Prix, Championship, Career, Multiplayer and Split Screen. The Instant Race option throws you straight into a random event. Grand Prix lets you choose your rider, class and track. Championship lets you race a series of races and you can also choose which circuits will be included. There’s pretty much a mode for whatever you are in the mood for but one thing we found really odd is the lack of tutorial to help you learn.

You can use an official real rider or create your own custom one. The customisation is limited but you can put your name, nickname, initials and age in. You have to choose a profile photo from a selection and there is no option to add your own face. A nice feature is the option to choose your riding style which affects how you sit on the bike based on the popular styles that the professionals use.

The Career mode is the most complex and lets you start out as a new rider. In between career races you sit in your motorhome where you can check the newspapers, emails from your team, championship standings and your racing calendar. You get invited to Moto 3 events and teams will give you position targets and riders to beat. If you impress you get to race more and earn better opportunities as you work your way up through Moto 2 to MotoGP. The ultimate aim is to win the MotoGP World title.

Racing a bike is much more technical than a car and most players are going to struggle to begin with and find themselves spending a lot of time off the track or sliding across the ground. Fortunately with practice it becomes a lot easier and to help you along there are a variety of riding aids to help you along. These include auto braking, joint brakes, steering help and racing line. There are different physics models on offer and you can also set if the game helps your body position for speed on the straights, gear transmission and how many rewinds you get. The rewind system is very useful for retrying a corner that goes bad.

Before each race you start in your team garage and various options are available to you. You can look at the current session info to learn about the weather, track temperature, wind speed and direction which may affect your setup. You can play around with your bike setup to tweak it to your preferred setup. You can configure the suspension, handlebars, traction control, gears, brakes and tyres. It’s a little overwhelming if you don’t know much about this kind of stuff but there is enough information to get you started. Most players will probably ignore it but it’s sure to be popular with a certain type of player.

There’s also a technical meeting area where you can talk to one of your team about your current bike setup. It’s also text based but they will ask questions and can tweak your bike based on your feedback. This section also allows you to learn more about MotoGP such as the rules and how race sessions work.

Once you’re ready you can head out onto the starting grid to begin your race. We’d highly recommend new players spend some time learning the courses with the racing aids on. However it’s once you start to reduce your use of the aids and up the physics to pro that the game becomes the most fun. It’s much harder when you do so but racing is so much more satisfying and rewarding.

In addition to the single player modes the game features online play for up to 12 players. The races we tried were fun as real players make all kinds of errors that you don’t get against the AI. With a group of friends the game is a lot of fun online. The host can configure a lobby to his liking and control what rules and aids players have. Between each round it’s possible to allow voting on the next track and the weather conditions.

The game looks pretty nice with some excellent detail on the bikes and riders. The first person camera view on the bike is particularly impressive. The tracks themselves seem a little sparse but that’s not really an issue. In split screen multiplayer the game is surprisingly laggy which we found made things harder than they are solo.

Overall we’ve had a great time with MotoGP 13 and are confident fans of the sport would enjoy it even more. There’s a focus on pure motorbike racing that is tough to get into but well worth the effort once you’ve put the hours in.