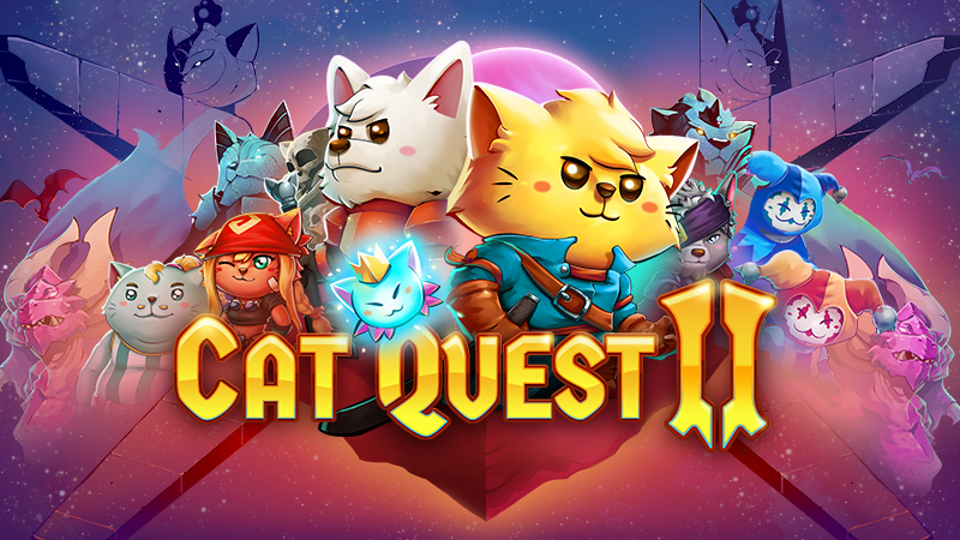 After the success of Cat Quest, developer The Gentlebros brings us Cat Quest II, expanding on the original universe of Felingard and introducing some lovely new bits and bobs into the mix!

Cat Quest II is set up for feline dungeon crawling with a variety of mechanics inside each said dungeon. You’ll have to manoeuvre around spike traps and different enemies as things get a bit tougher–a great deal of this revolving around hack and slash style gameplay. You can equip your duo with things such as mage staffs and take the ranged road if you like, but don’t forget the other side of your move set that is imperative: the dodge roll. This roll will get you out of a lot of trouble. Most enemies have a warning system that Cat Quest II so mercifully gave: a little red circle will appear and act as a timer before the enemy themselves attack. It’s a small window that gives you enough time to immediately pull a roll. The roll is nicely done in a way that if you press the roll on it’s own, it automatically will dodge backwards.

I think the great challenge in Cat Quest II’s combat is simply getting over confident–which is a good problem to have. The player will feel good during, with mechanics easily learned and executed…but have a lapse in patience and feel the need to get that extra hit in, or not properly dodge before an enemy lands a hit, and you’ll find yourself in a great deal of trouble. There’s also rune-type powerups that keep things spicy. Those tend to consume mana, and are super fun to throw into the mix when you’re fighting an enemy.

In the midst of all this crazy combatting, you’ll have the option to play co-op or switch between two constant characters in your party. Now, this is the first real hook Cat Quest II drew me in on–I love playing with a friend and the idea that the computer takes over, (quite capable too!) which is a riot to me. I loved equipping the cat and dog, switching mid fight and even enjoyed the resurrecting when one is downed. All together really well done and seamless switching between the two. Huge plus in my book!

Absolutely everything in Cat Quest II is fun to look at. Cartoony design that pairs wonderfully with it’s bright and inviting colour palette, it’s a wonder that there’s not a stuffed animal of every character in the game (They’re all adorable!). You’ll often find yourself going between dungeons on a nicely done map world too–sort of like Ocarina’s Hyrule Field. You can outrun the baddies on the map bit, or stick around and do a bit of grinding for XP….it’s a smart and fun way to transition from dungeon to dungeon, and a good chunk of quests actually take place on the open map world.

There is a LOT of RPing in Cat Quest II. I hope you’re ready for dialog and story, because that’s what you came to the table for. If you’re a fan of puns, this is going to be your Holy Grail of a game too; every other word out of each character’s mouth is a cat-laden pun. Every location in the game is also cleverly spun to have ‘cat’ or ‘meow’ or some sort of reference to our feline friends in it. Seriously, I felt like I could learn a thing or two from Gentlebros–a team that I assume is made up of walking and talking dad jokes. It is ridiculously cute and fits the setting perfectly so.

View some screenshots from Cat Quest II in our gallery:

Cat Quest II is super fun, and kid approved. It’ll make you giggle from the goofy and constant puns, and keep you on your toes in straightforward and rewarding combat. There’s plenty to collect, story to digest and good times to be had for all–Cat Quest II comes highly recommended if you’re looking for some lighthearted fun!

Cat Quest II was reviewed using a digital code provided by the publisher.

In this article:Cat Quest II, PC, PQube, Steam, The Gentlebros