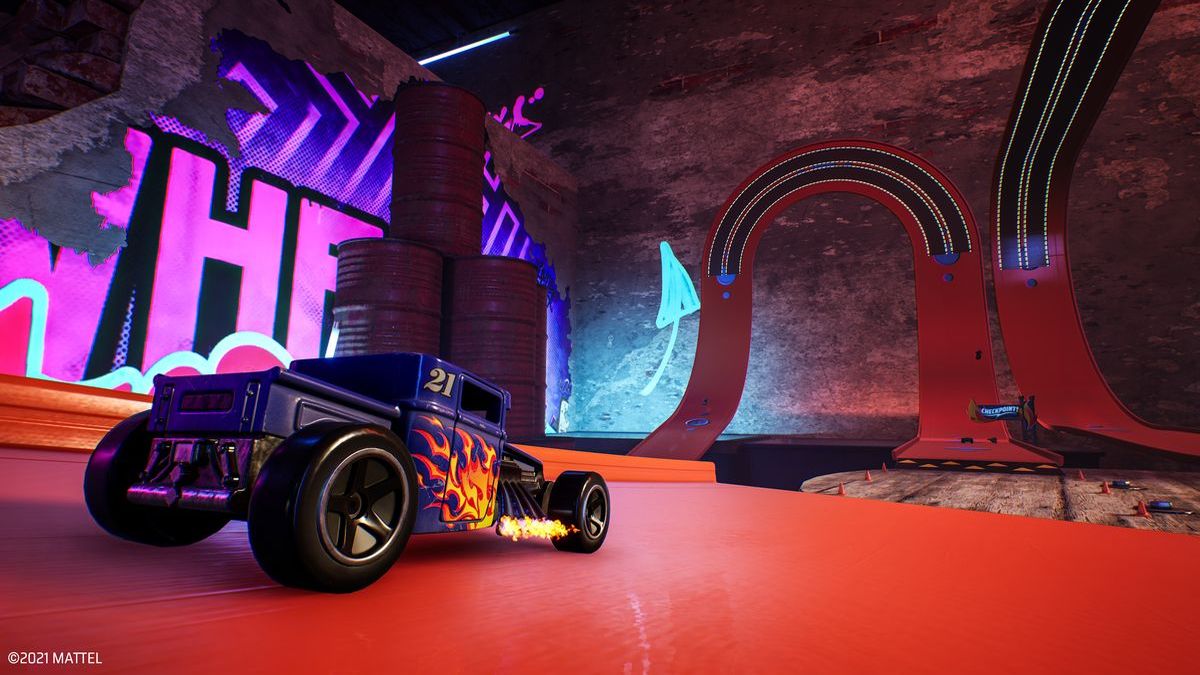 As a little lad growing up in the ’90s and early ’00s of course I had a bunch of Hot Wheels products. I would meticulously clean the dust of my cars and set them up like it was a Fast and Furious car meet. As with most of our stuff as a kid, my collection disappeared as the years went on (and now there’s a slightly higher level of resentment towards my parents!) and video games continued to take priority. While I may have been too busy as a kid playing games I shouldn’t, racing games never properly landed for me, except for a few. Hot Wheels: Unleashed could very well be one of the exceptions and give me a nostalgia boost. I’m not expecting a Forza level of quality here, but let’s see how developer Milestone do.

As this is a racing game, you’d expect there to be no story at all and you’d be wrong…sort of. You’re given a map of levels (think Mario Party) and told that 5 monsters have taken over the city and forced people to race…not sure on the efficiency of the world domination plan, but there it is. It’s nothing more than window dressing and a way to keep kids invested, I expected nothing from it and got nothing, which is absolutely fine.

Here we get to the racing part of the review and while I’m a novice at racing games in general, I can see the patterns in how they handle. Of course, you have your hardcore simulations, your more arcade-y racers, the really arcade-y racers, the kart racers and the ones that do something completely different. The difference between a good racing game and a bad one is a game that knows what type it is. Hot Wheels: Unleashed understands this brilliantly. The developers have modelled their cars as toys, which would put them in the really arcade-y racer subgenre. This is an important point to make because if the developers went for a more traditional Forza-esque handling system, the entire flow of the game would have been far worse.

What do I mean? Is the handling bad? Is it floaty? No, not at all. Since you’re piloting tiny lightweight cars, there is a feeling of iciness on tight turns and when you hit a ramp, you feel like you’ll take off but this is a well-crafted design choice. The game nails the feeling of ‘I’m not piloting a car, I’m a kid physically pushing my car along a track’. This gives Hot Wheels: Unleashed its own identity. It almost has a kart racer feel but with a slight injection of something akin to FlatOut. It’s awesome.

There are 6 tracks available and put down the pitchforks because each track has several layouts and a few surprises to keep you on your toes. Like the old toy sets, there are jumps and loops and gravity-defying bends to master and you even go off the bumpered path at times. Much like the handling system, Milestone have decided to create tracks true to size, tiny. The tracks are scaled down to room-sized as you weave through bookshelves and go under tables like you’re zooming through the set of a Toy Story film. Each track has boost pads and pads that charge your boost meter and some tracks have environmental hazards, like spiders! There’s also a fantastic track creator and you can get really crazy with twists and turns and all sorts of loop structures, it can be a little tricky to navigate for younger ones but there’s a surprising amount of depth there.

There’s a strong selection of cars and all of them are upgradeable. The cars themselves aren’t hugely different, so just pick the ones with higher stats and you’ll be fine. The world map has a ton of side missions and completing these nets you all sorts of cosmetic unlockables. You have a basement, which acts as a menu and this can be customised with your winnings, it’s a simple visual treat but it keeps you playing.

And speaking of visuals…this game is stunning. The tracks all look wonderful, with exceptional lighting. Reflections on the tracks may not be ray traced but they look great. The music has a Persona vibe, especially in the menus and the game runs great from start to finish.

I had an absolute blast with Hot Wheels: Unleashed. There was a nice dose of nostalgia due to Milestone sticking to a consistent theme and did I mention you can even see fingerprints on the cars? Nostalgia aside, as a racer it’s great fun. Turn the difficulty down and kids will have a blast and on the higher difficulties, it gave me a decent challenge. Is it a racer I’ll keep coming back to for years to come? Probably not, but as it stands Hot Wheels: Unleashed absolutely nails everything it set out to do. The only slight nitpicks I have is unlocking cars via a loot-box system is an ugly system to me (though everything is unlocked in-game) and I’d like to see 4 player split-screen as an option instead of 2. Besides that, get this game, it’s excellent.

Hot Wheels Unleashed was reviewed using a digital code provided by the publisher.