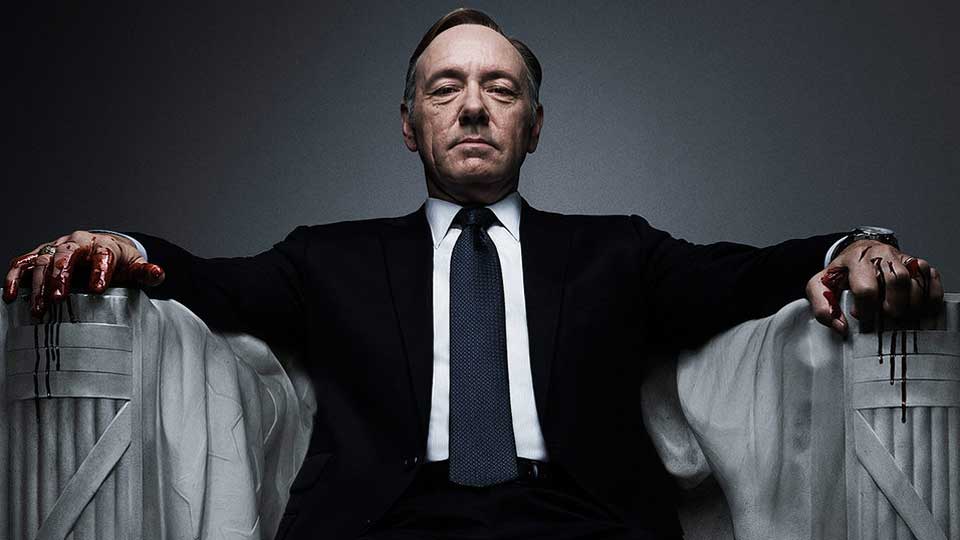 Francis Underwood (Kevin Spacey) is an ambitious Democratic congressman, and House Majority Whip, who is furious when the President breaks his word and doesn’t appoint him as Secretary of State. Together with his wife Claire (Robin Wright) and his chief of staff Doug Stamper (Michael Kelly), Francis sets a plan of revenge in motion to disgrace his enemies and secure a position in the White House. After being approached by aspiring journalist Zoe Barnes (Kate Mara), Francis realises he can use her to print his agenda and starts to leak confidential details. He also has his eye on troubled U.S. representative Peter Russo (Corey Stoll) and blackmails him to help put his plans into motion.

House of Cards is an adaptation of the four-part BBC series which starred Ian Richardson and aired in 1990. Maintaining the general gist of the original series, this version places the action in modern day Washington D.C. and tells its story over 13 episodes. Fans of the original series will find plenty of familiar moments here but there’s also plenty of new material to feast on. The series debuted on streaming service Netflix and has already been commissioned for a second season.

Essentially House of Cards is a political thriller with multiple plots running simultaneously with the central one of Francis’ revenge. Peter Russo gets dragged into Francis’ plan after being bailed out of a DUI where he was caught with a prostitute whilst Zoe Barnes quickly becomes a victim of misguided opportunity as she sees her relationship with Francis as a way to fast-track her career. Alongside those two main sub-plots there is also Francis’ wife Claire who is running her own charitable organisation and soon established as just as manipulative and scheming as her husband.

Acclaimed director David Fincher acts as executive producer and sometime director throughout the first season bringing his magic touch along with him. At the centre of the show is a powerhouse performance from Kevin Spacey. We were surprised to hear that the movie and theatre star was leading a TV show but the strength of the material was clearly the big draw. Spacey is perfect as the scheming and manipulative Francis aka Frank. Speaking with a Southern drawl, Spacey’s performance is understated yet powerful.

Spacey is surrounded by a wonderful ensemble with every actor giving superb performances. Robin Wright is simply a revelation as Claire balancing malice with a cool and calm exterior. She is easily one of the standouts of the show. Kate Mara finally leaves behind the crazy character she’s best known for in American Horror Story and really surprises as go-getter Zoe. Other strong performances in the series come from Corey Stoll as the drug and drink addicted Peter Russo, Kristen Connolly as Russo’s staffer/girlfriend Christina Gallagher and Constance Zimmer as Zoe’s nemesis at The Washington Herald Janine Skorsky.

As well as getting the series on DVD, the boxset also offers an Ultraviolet version for those who want to stream the show on different devices.

House of Cards is the perfect recommendation for anyone who likes their drama dark, political and full of twists. Fans of the original series will find much to enjoy about this adaptation and those unfamiliar will love this political powerhouse of a series. We can’t wait for House of Cards to return for a second season and we’re simply itching for more of Kevin Spacey and Robin Wright scheming as the show’s central characters Francis and Claire.