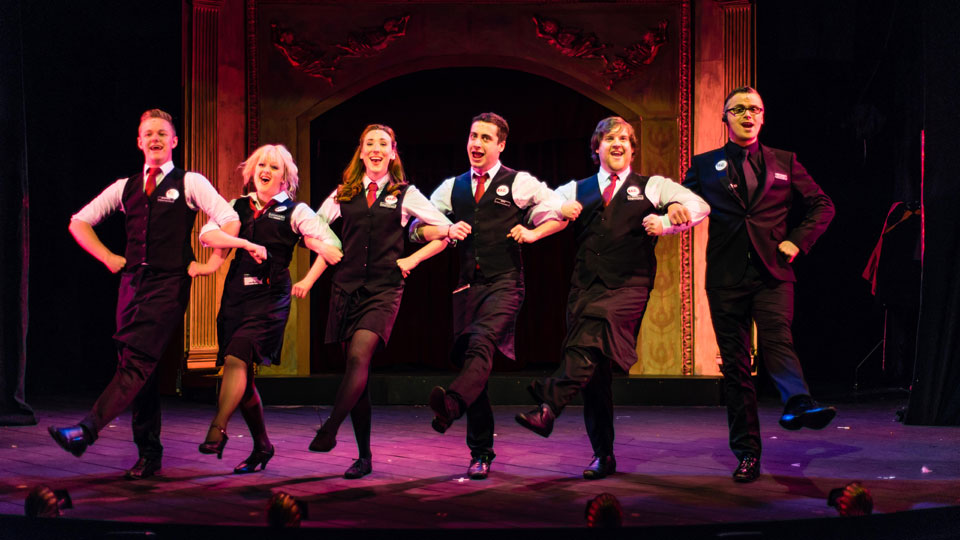 Following a late-night West End run, Ushers: The Front Of House Musical has been promoted to a four-week prime-time run, and deservedly so.

The original musical comedy is insanely infectious from the rousing opening number to the final curtain call. Set front (and back) of house at the fictional (for now…) Oops I Did It Again: The Britney Spears Experience, Ushers takes a satirical look at the lives and loves of those who probably work just as hard as those on stage but get far less applause.

The action centres around five members of staff, all wishing they would be somewhere else – ranging from frustrated actors to professional stalkers. The plot is far from complex but manages to include a surprisingly tender gay love story and more theatrical in-jokes than you can shake a jazz hand at. No show is safe, Loves Never Dies is branded Paint Never Dries, TV talent show stars take a roasting and there’s even topical digs at the short-lived X Factor musical I Can’t Sing. It must be said that some of the more knowing asides did fly right over the heads of some audience members (us included) but you don’t have to be a complete theatrical aficionado to enjoy the show.

Yiannis Koutsakos’ score really lifts the musical into another level. It’s consistently melodic and uplifting and is bought to life by the talented cast who are in fine voice – with special mentions for Liam Ross-Mills and Daniel Buckly who really made the most of their solo numbers and performed a beautiful duet, one of the highlights of the show. The whole company brings a thrilling energy to the production – and the auditorium as they descend from the stage and make full use of the theatre.

The only real gripe is that each character is given their own narrative thread in the first half of the show and some of them remain underdeveloped by the curtain call. Basically, we want more!

This is a short, snappy success which deserves much more than the cult crowd it will undoubtedly find.