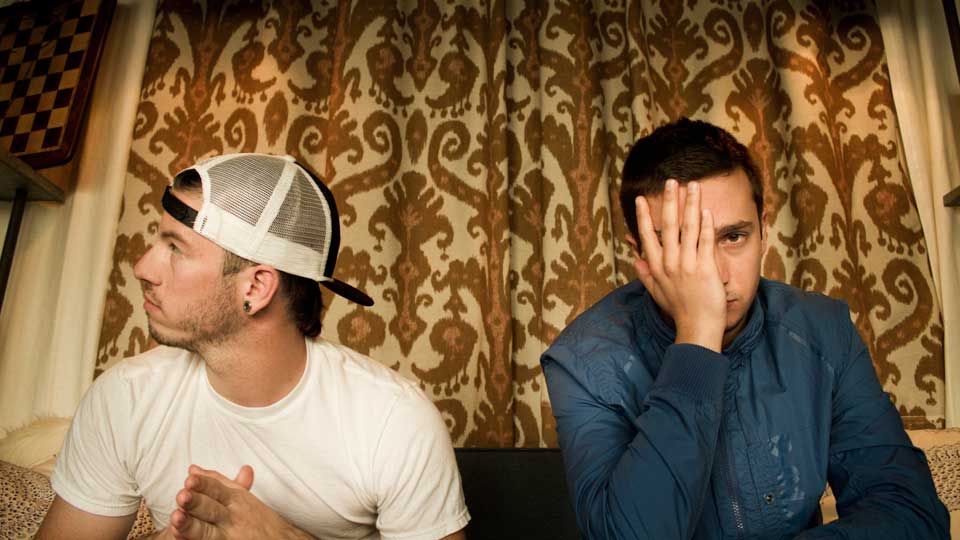 Twenty One Pilots are pretty damn hard to pin down description-wise. Incorporating various genres and aspects into their act, their songs exhibit many solid elements of rap-rock, synthpop and indie-tronica, but don’t ever really seem to fully settle into comfortable sound. The Ohio based duo has been praised since their formation for their eclectic music and energetic live shows, and now they’ve given us their first album under a major label.

Vessel kicks off to a perplexing start, in exhibiting no less than 3 varying musical styles within the first 2 minutes. The introduction of Ode To Sleep is built of futuristic synthesiser sounds and slow pulsing bass, before breaking into short lived rhymes reminiscent of early Eminem, then dives into drawn out vocals put to upbeat pop strewn piano, making for one utterly bewildering musical blend.

Whilst Tyler Joseph and Josh Dun certainly demonstrate the raw makings of successful and sincere songwriters, their inability to resist the urge to increase speed and raise the volume becomes too much to bear, and the end result lies somewhere between Gym Class Heroes and My Chemical Romance.

By the third track, a sense of dire déjà vu has thoroughly set in, as the irritatingly prevalent rap-vocal formula is stubbornly lodged into your brain. Guns For Hands and Semi-Automatic are painfully obvious attempts at social commentary in the wake of the Sandy Hook tragedy and Obama’s subsequent plight to change the law concerning firearms in the US, providing a touch of controversy to an otherwise unimpressive album, including exclamations of  ‘you all have guns but you never put the safety on’.

Joseph came up with the band’s name while studying All My Sons by Arthur Miller, a play about a man who commits suicide after causing the death of twenty one pilots during World War II because he knowingly sent them faulty parts for the good of his business. This story of moral conflict was the inspiration for the name of the band, and the theme of conflict is one that runs through this album, with songs completely at odds with themselves.

A banjo helps to lighten the mood and tediousness on House Of Gold by enveloping the track in a pleasantly folky vibe, but even this doesn’t distract from the fact that it’s basically the same format. Similarly, penultimate track Trees begins as a heartfelt and honest effort, before submitting to the typically electronic ways of the trying youngsters.

Concluding track Truce is the only real surprise, which sees the pair finally committing to a much gentler and altogether enjoyable melody, peppered with light piano sounds accompanied by toned down vocals, providing the only truly pure moment of enjoyment.

In striving to be utterly original through endless experimentation, Twenty One Pilots simply end up imitating their influences and just can’t seem to settle on one style between them, making for a confusingly exhausting listening experience. We hope these boys find their true footing for future releases, as they have the potential to create truly forward thinking music.

In this article:Music Review, twenty one pilots, Vessel album review