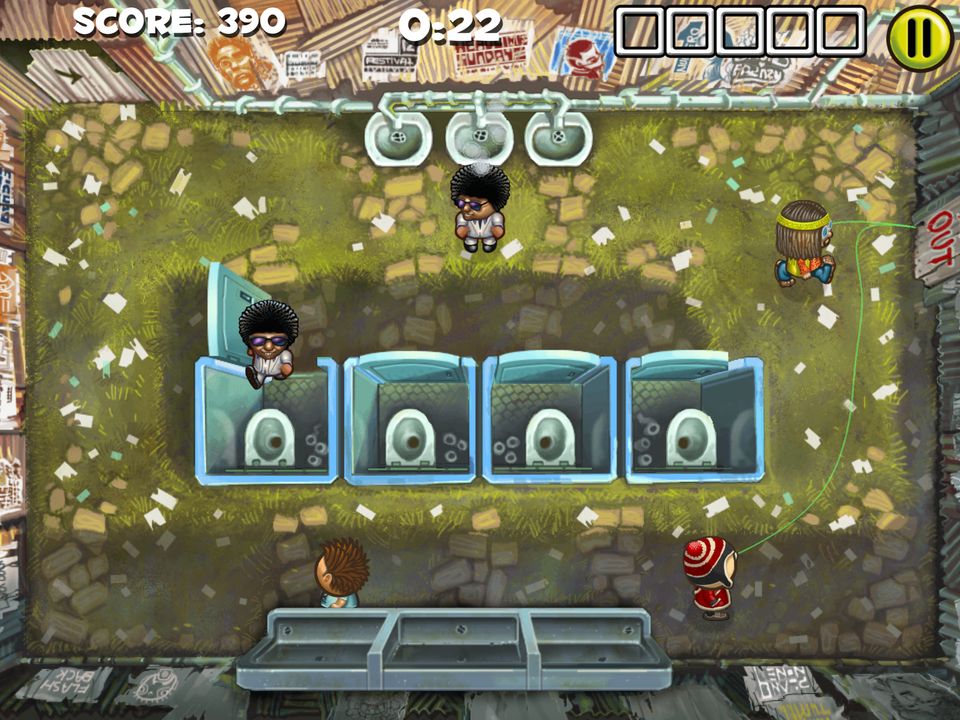 Men’s Room Mayhem is the debut title from Liverpool-based developer Sawfly Studios with Ripstone handling the publishing. Sawfly formed earlier this year as a team of four following the closure of Sony’s Studio Liverpool. With talent that has previously worked on franchises such as Wipeout and Motorstorm we were keen to see what they’ve been working on.

If you took the popular air traffic management game, Flight Control, and set it in a public toilet then the result would be Men’s Room Mayhem. Initially the game seems very similar but thankfully the developers have introduced several more gameplay mechanics to keep things interesting.

The game features five different public toilet locations which are a Country Pub, Hotel, Nightclub, Biker Bar and Music Festival. The core gameplay is the same as Flight Control where you draw lines to direct people instead of planes.

Throughout each level the entrance door opens and a person steps in needing to go for a either a wee or a poo. Your job is to direct them by using your finger to draw a path to a urinal or cubicle based upon their needs. However there’s more to it than that as your interaction with each person doesn’t just end once they reach a loo.

Points are awarded for getting them to the correct place and once finished they will stand on the spot until given further instruction. To earn more score per person you can direct them to a sink to wash their hands and also out of the toilets. The game follows the unwritten rules of the men’s room and also awards bonus points for etiquette which you can earn by not using adjacent toilets.

Some people have a greater need than others and must reach a toilet within a certain number of seconds or else they mess on the floor. If you get them to a loo with just a couple of seconds remaining you earn a close call bonus. You can also earn a near miss bonus for moving closely past another person. Should two guys touch then a fight breaks out and it’s your job to send them outside by tapping on them.

At the end of a round you earn additional bonus points for the number of people still hanging about. This makes it worthwhile keeping them there once they’ve done their business and washed their hands. However doing so is no easy task as more people means less space to move and more chance of fights breaking out.

Before the next round begins you are given a short time to clean up. This is done by rubbing your finger over mess such as pools of blood from fights and places where people have had accidents. You can also clean the sinks and cubicles too. The more mayhem you fail to stop happening the more bonus points are up for grabs.

The different settings also feature special characters that need managing differently. For example the old man moves really slowly and constantly gets in the way. The nightclub features a lady who makes men stop in their tracks and is really useful for managing the crowds. There’s also a drunkard complete with unpredictable movement. These special characters really mix up the mayhem and keep things interesting.

The game also features challenges that must be completed in order to unlock the later levels. These remind us of games like Jetpack Joyride and Temple Run 2. A challenge might ask you do something like make a set number of people wash their hands or hang around until the end of a level.

Men’s Room Mayhem is great fun and very addictive. After the initial waves the game gets difficult fast but the leaderboards will keep you coming back for just one more go. Fans of Flight Control will love it.

Men’s Room Mayhem is available 22nd May for PlayStation Vita and 23rd May for the App Store, Google Play and the Amazon Appstore Store. The Vita version costs £1.99 (PS Plus members can purchase the game at 50% off for one month only)and the other versions cost £0.69. On Vita the game includes all the bonus locations and blitz mode but these can be purchased in game on the other editions.