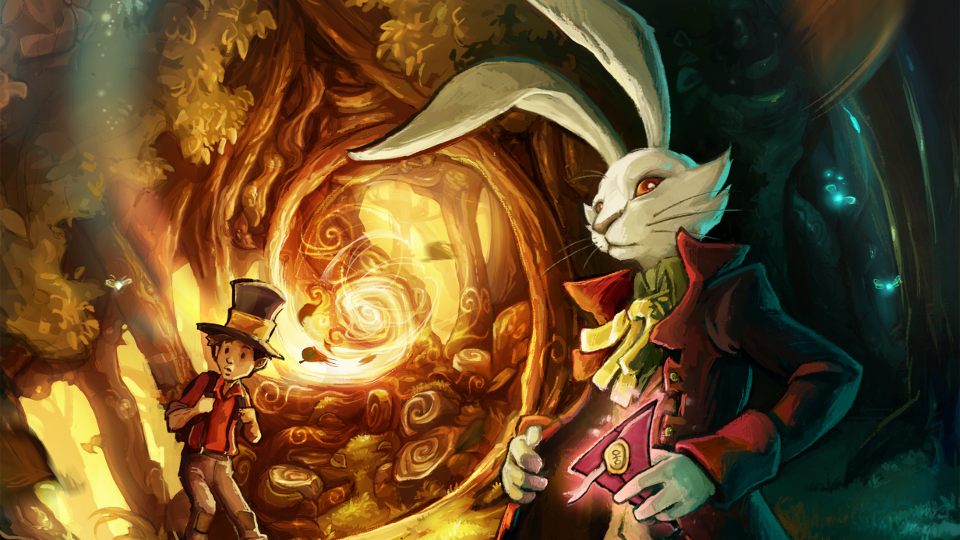 The Night of the Rabbit is a brand new point-and-click adventure game from Hamburg-based developers Daedalic Entertainment (Deponia). We’ve been lucky enough to play through the preview build to see if this is an adventure worth taking.

The game opens up with a strange almost dreamlike sequence where you take control of a silent rabbit. Also present is a strange creature with plenty to say and he helps you find your way. It doesn’t make a lot of sense but once this is out of the way you are introduced to the main character of the game Jeremiah Hazelnut (Jerry).

Jerry is a twelve year old boy with a wild imagination and his dream is to become a magician. After a good night’s sleep Jerry is woken up on a beautiful morning by his mother. She doesn’t want him to sleep in as there are only a couple of days of his summer vacation left to enjoy.

There is then a short and entertaining tutorial that is presented to Jerry in the form of a radio broadcast. Fans of point-and-click adventures will probably already feel right at home though so the developers have included the option to skip this part if required.

Jerry is then sent off into the woods by his home to fetch blackberries for his mother. This is a nice simple task that allows you to learn how the game works and gives you a couple of simple puzzles to solve. Jerry then comes across a mysterious letter that contains the first complex puzzle of the game. It contains a recipe of sorts to create a carrot flame.

With a little bit of thought and some exploration it’s quite straight forward to gather the ingredients that you need. After completing the puzzle Jerry meets the Marquis de Hoto who also happens to be the rabbit from the start of the game. As it happens the rabbit is a magician and he wants Jerry to be his apprentice.

Jerry agrees, as long as he makes it back home in time for tea, and is then transported to a different world. You end up in a little place called Mousewood that is inhabited by a variety of talking animals such as mice, moles, rabbits and owls. The residents of Mousewood are terrified of attacks from evil crows.

The Marquis takes Jerry to meet the council and sets him off on a series of trials which he must complete to become a magician. Along the way there are many interesting characters to meet, some wonderful locations to discover and puzzles to solve. Jerry carries a magic coin with him that can be used to highlight important or hidden features of each location. He can also use a spell to remotely communicate with the Marquis to obtain hints when he is stuck.

The build we played is only the first sixth or so of the game and we were warned that parts of it weren’t complete. However we were pleasantly surprised by how polished the whole thing was. The graphics are very detailed and everything looks fantastic. It uses a cartoon like aesthetic and there are plenty little animated touches around the scenes to make them feel alive.

The game features lots of excellent music that was composed especially for the game. It’s also worth pointing out that the many characters are fully voiced and the acting is rather good. So many games we see like this are let down by poor voice acting but this doesn’t look like it will be an issue here.

The Night of the Rabbit is shaping up to be a brilliant point-and-click adventure for gamers of all ages. The story is interesting and we were disappointed when we had to stop playing as we wanted to see more. The final game will also be littered with collectibles to discover. Fans of adventure games should definitely look forward to The Night of the Rabbit as it looks like Daedalic are onto a winner.

In this article:Adventure, Daedalic Entertainment, PC, Point and click, The Night of the Rabbit