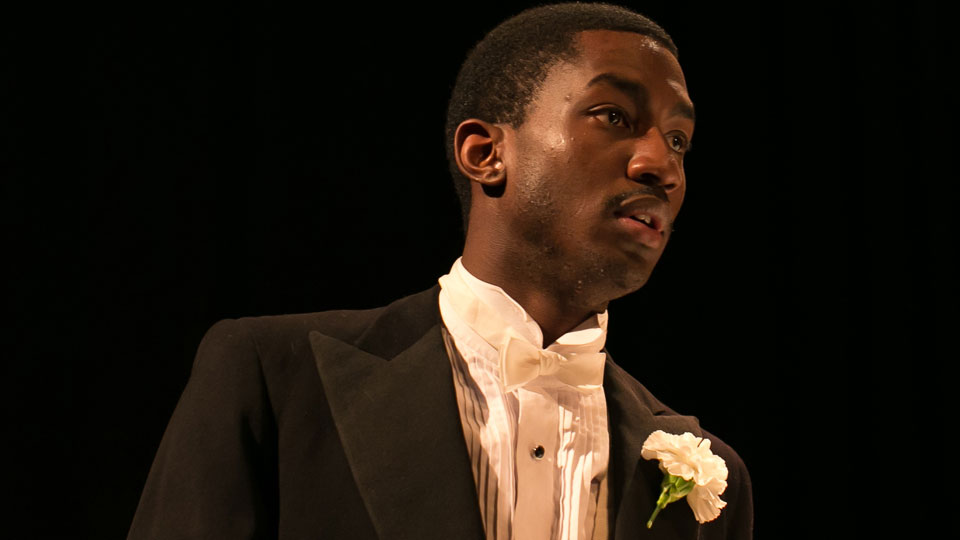 Hutch, currently playing at Riverside Studios, is an autobiographical new musical show about the life of Leslie Hutchinson, a black musician from Harlem who became a star in Paris and London in the 1920s thanks to his relationship with Cole Porter. He later had an infamous affair with Edwina Mountbatten (well, who didn’t?) and later slowly declined into poverty and obscurity.

Using the music of the 20s and 30s, Hutch attempts to bring across the story of a fascinating man who lived in equally fascinating times.

Sid Phoenix as Cole Porter and Sheldon Green as Hutch.

The innovation of the piece is the casting of musically gifted actors in the main parts. Thus, a piano permanently stage right and mobile instruments brought on when necessary hugely assist the production in recreating the atmosphere of Café de Paris, where much of the action is set; and with music so central to the piece, it’s vastly to be preferred to miming along to a pre-recorded soundtrack.

Hutch will especially appeal to anybody with a fondness for the music of the era, and most especially the songs of Cole Porter and Jerome Kern. Short scenes generally segue into songs that attempt to reinforce the mood of the drama.

Where Hutch is enormously successful musically, it falls flatter with the drama, much of which feels leaden. The actors are encumbered by inelegant design, with a protruding circular platform rather too often getting underfoot. The platform itself leads up to a doorway that wouldn’t look out of place as the set of a tacky Saturday night TV entertainment show. Simpler design may have helped to focus the drama.

Studio Three is an awkward space, as it’s too long to comfortably contain intimate drama. With actors placed on both sides of the stage, watching Hutch is at times a bit like watching a tennis match, an impression reinforced by the unforgiving plastic seats of the auditorium. A stronger book may aid the suspension of disbelief, but although Hutch sometimes sparks into life, mostly when the wonderful Imogen Daines is on stage breathing wholly credible life into Edwina Mountbatten, it never quite reaches the point of conflagration.

The Mountbattens are a delight to watch. Andrew Mathys has many of the best lines, and he makes the most of them, raising many of the laughs as the cuckolded husband; and Imogen Daines is everything you could want Edwina to be: seductive, selfish and witty. Sid Phoenix, seen previously in Waiting for Lefty, offers a useful contrast as the cool, sophisticated Cole Porter.

Andrew Mathys and Imogen Daines as the Mountbattens.

Sheldon Green is good as Leslie Hutchinson, and his piano playing is superb. If he finds a way to internalise the more extreme emotions his performance has the potential to be excellent.

The Halbwelt Kultur, a troupe of chorus girls, is another success of the production, and will be especially appreciated by red-blooded males. They, and the music, create a great atmosphere that the drama never quite lives up to.