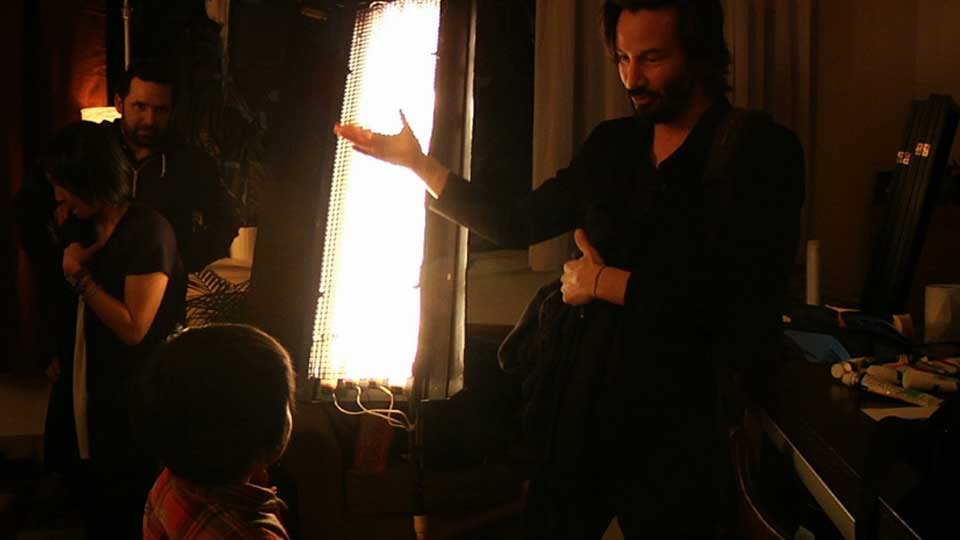 Keanu Reeves presents a documentary looking at the history, process and workflow of digital and celluloid film, also the ongoing controversy in the movie industry about shooting on film or digital. Side by Side features interviews from big directors such as Martin Scorsese, David Fincher, George Lucas, David Lynch, James Cameron, Christopher Nolan and Danny Boyle that all argue merits to working with both styles. Is film dead? You decide.

Side By Side is not a documentary for everyone. The documentary makers do give a history lesson of film at the beginning, but it is very heavy when discussing some of the more intricate parts of the filming process. At times it becomes far too engrossed in its own workings to care about what is being shown, and that makes the doc feel rather geeky in its portrayal of film styles so that the viewer can become detached from what is actually being talked about. It’s not to say it isn’t a relevant subject but with most viewers having no prior knowledge of a lot of these workings it can fell like too much information being forced.

The best moments in Side By Side is the honest interviews with the directors, DP’s, editors and colourists. They all have their own opinions and it’s refreshing to see that not all of them tow the same line. This can become bothersome when trying to make your own decision, however these are the people who work so close to this medium that you cannot disregard anything any of them say. The Social Network director David Fincher is pretty venomous in his attitude towards celluloid, but he makes some very valid points as to why it doesn’t work for the type of styling he wants to see in his films. The one huge worry that comes across is how much power George Lucas has had in the rise of digital film-making. Basically he decided after Star Wars that his company would help develop digital film and from then on he was constantly pushing that medium on everyone. His attitude to filming Star Wars Episode II: Attack Of The Clones solely on digital film was nothing short of aggressive to get the medium out there, it didn’t matter if studios, cinemas etc weren’t ready as he was just going to do it anyway and everyone else be damned.

But on the flip side The Dark Knight director Christopher Nolan is very much a celluloid faithful and you feel his love for the medium when he speaks. Also his own Director Of Photography (DP) Wally Pfister gives some great perspectives as he see’s things from a slightly different film angle than Nolan, but still professes his love for real film.

During the interviews with the DP’s and editors, we started to get the feeling they are now truly worried for their jobs, and these are jobs that they have had to train for most of their lives to become accomplished in. Anne Coates, editor of Lawrence Of Arabia, says she had to go out and learn the new computer technology for herself, as for years she was used to the celluloid splice technique and then a younger generation set about doing away with that – “I thought a mouse was something you see running around on the floor” she says, but now she has embraced the new technology and is still applying her trade all these years later

Side By Side deals with an issue that is directly affecting every single person who works/watches films, whether they know about it or not. The documentary is as balanced as it could be considering the subject matter and at least one director, Danny Boyle, is very passionate for both sides. Ultimately it’s left to the viewer to make up their own mind.