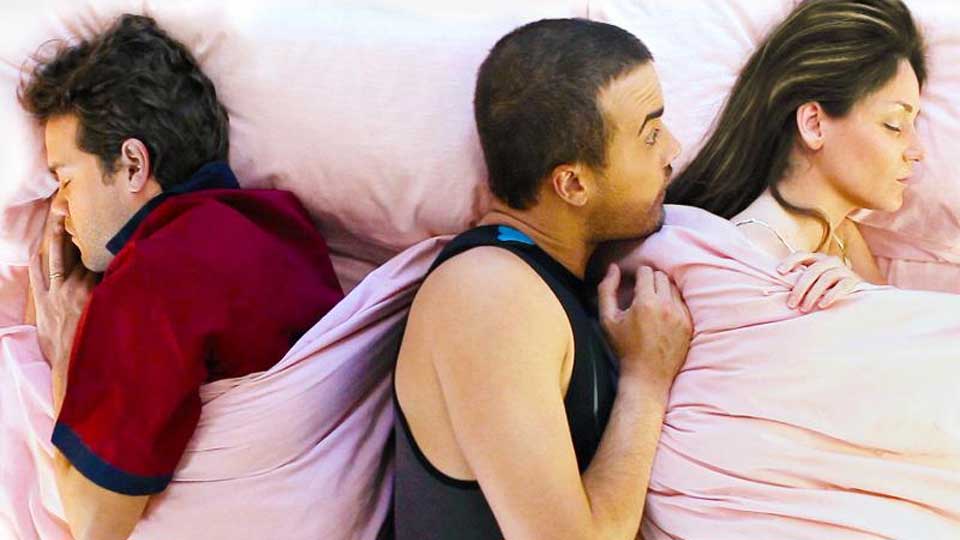 Miguel (Suso Marin) has a serious diving accident and is being urged to crossover by his Guardian angel. The problem is he’s in love with Patricia (Paola Verdu), a married woman, and he doesn’t want to be without her. As he watches over her, Patricia starts to dream about Miguel and begins a relationship with his astral spirit. When Patricia’s husband becomes suspicious of her, he hires a private detective who discovers the unusual relationship and tries to win her back from her new spirit love.

Stuck To Your Pillow is from writer/director Mari Navarro and is clearly an attempt to update the movie classic Ghost. Mixing the spirit and living worlds, the film is a romantic comedy/drama that aims to tell a love story that crosses the spiritual divide. Unfortunately it doesn’t quite pull it off with the story being unbelievable and bordering on ridiculous. It really does require you to switch off your logic if you want to get on board with the characters.

The main reason to watch Stuck To Your Pillow is the central performance of Suso Marin. Despite the film being utterly ridiculous, he is reason enough to watch. He puts in a good performance showcasing great comic timing but also convincing in the more serious and emotional moments. It doesn’t help that he’s very easy on the eye too. Paola Verdu does her best too but the character she is playing is so hard to relate to that you don’t really join her on her dream love affair.

Stuck To Your Pillow isn’t a great movie. The premise could have been a lot of fun with plenty of laughs and emotional moments but it never rises to it. Instead the story descends into near farce and you don’t believe a single thing you’re watching. It’s a real shame as there was potential here. To be honest if Suso Marin wasn’t so adorable we probably wouldn’t have made it to the end.

In this article:Paola Verdu, Stuck On Your Pillow, Suso Marin