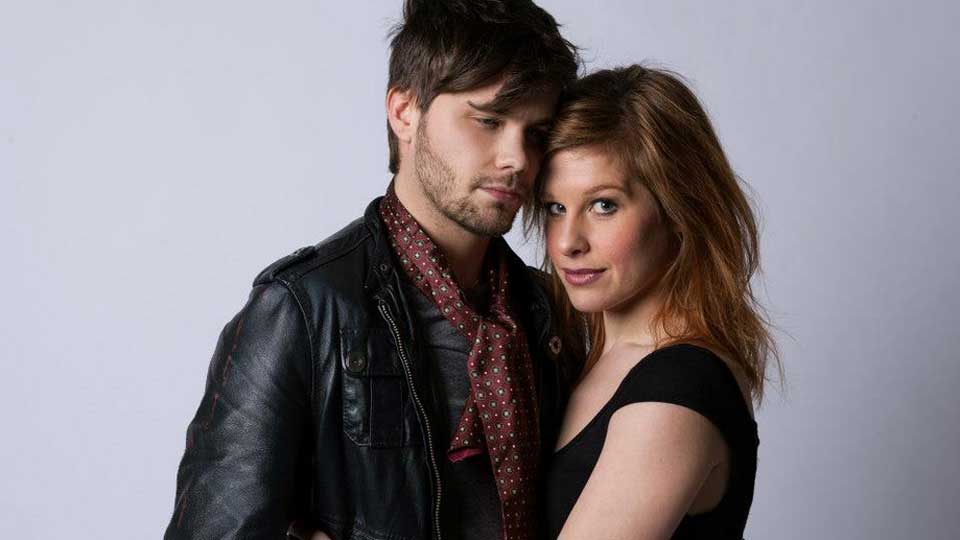 Aspiring Scottish singer-songwriter Monica P. Miller (Cassidy Janson) is determined to get out of Glasgow and move to London in a bid to becoming a huge star. A chance encounter with near-recluse singer-songwriter and guitarist Ian (Alexis Gerred) finds the two joining forces as the climb the fickle ladder of success. Despite being complete opposites, with different hopes and aspirations, the two find themselves swept along on an unexpected journey beginning in the late 70s as the rise of New  Wave and Punk starts to take over the charts. As their success increases, Monica and Ian face a series of challenges that test their relationship and their careers.

Rooms was first performed in 2005 at the New York Musical Theatre Festival before moving through the US and Canada to critical acclaim. The semi-autobiographical story is written by Glasgow born Paul Scott Goodman and Michigan born Miriam Gordon.  Its current run at London’s Finborough Theatre marks its European premiere with West End stars Cassidy Janson and Alexis Gerred in the lead roles.

For a space as small as the Finborough Theatre, Rooms should have created a bit of a challenge. Squeezing a four-man band and its two actors into the intimate setting could have felt very crowded but director Andrew Keates does a good job of making the space feel much bigger than it actually is. This works in the show’s favour as the audience is taken on a journey that starts in Glasgow then moves to New York via London. In terms of the set there are few props, a two level stage and three door frames.

The story that Rooms tells is a classic one of two very different people drawn together and riding the rollercoaster that any relationship presents. For Monica and Ian though it isn’t just the trials and tribulations of friendship and romance; there’s also the trappings that comes along with fame and success. Monica is determined to be a star W.I.T. (whatever it takes) and is eager to push on to the next thing before she’s fully accustomed to her current situation. Ian on the other hand gets swept up with Monica’s ambition putting aside his preference to spend time alone in his room with his guitar and a bottle of whiskey. Naturally the two conflicting characters end up on a crash-course collision which is handled beautifully through the show’s dialogue and its impressive repertoire of original songs.

Some have criticised the show for being clichéd and derivative. We don’t agree with this at all. What Rooms does is represent a very realistic relationship between two people and the so-called ‘cliches’ are the pitfalls and problems that every relationship encounters at some point. We’re more inclined to say this is grounded in reality rather than clichéd. The characters are relatable which is why its easy to go on their journey with them.

The songs are the show’s biggest draw. From the punk-rock anthem All I Want Is Everything through to the more tender moments such as Little Bit of Love, the music is varied and rich. One of the highlights of the show comes on the rather inappropriate yet hilarious Scottish Jewish Princess which Monica performs at a Bat Mitzvah. Other standout moments are the powerful Bring The Future Faster which encapsulates Monica’s determination and Fear of Flying which documents Ian’s struggle with the life he finds himself living.

The thing that really makes Rooms stand out from other shows is the performances of its two leads Cassidy Janson and Alexis Gerred. The chemistry between the two actors is believable and strong as they move from friends to love to resentment and back again. Janson possesses a remarkably powerful voice and throws herself into the character of Monica exploring every facet of the character. Gerred is perfectly cast as the ruggedly handsome Ian giving believability to the character’s struggles with alcohol and agoraphobia. He, like Janson, possesses a powerful voice and showcased range we’ve previously not heard from him. Together Gerred and Janson’s harmonies are electric and their energy throughout the show is relentless.

Rooms – A Rock Romance is a solid two-hander show with fantastic songs, a tight live band and fearless performances by its two leads. In the intimate surroundings of the Finborough Theatre the show feels special like it’s a well-kept secret which adds to its appeal. Running at 80 minutes without an interval, the show speeds by due to its snappy pace but it packs an emotional punch that we certainly didn’t expect. If you like your musical theatre raw, honest and moving then we highly recommend Rooms. It’s definitely a contender for one of the best musicals we’ve seen so far in 2013.