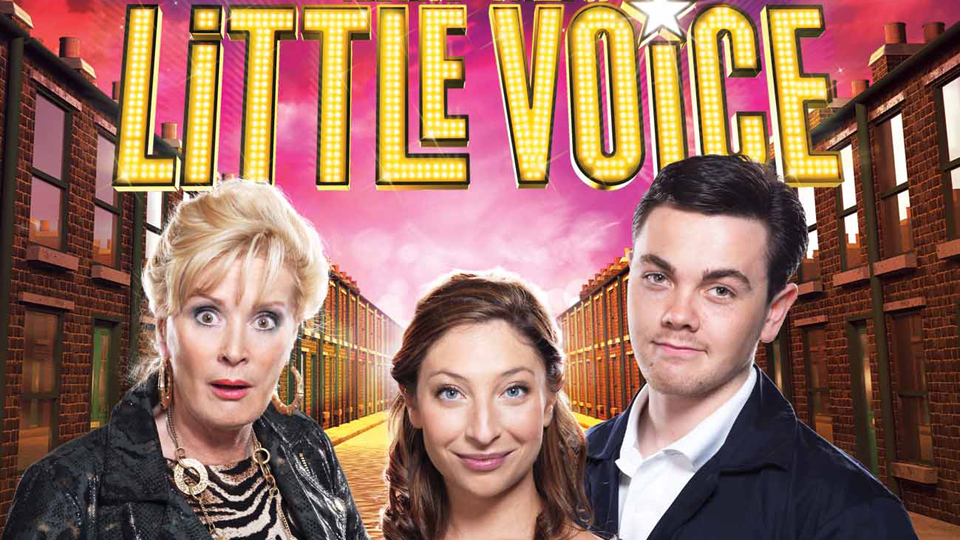 The Rise and Fall of Little Voice, Jim Cartwright’s modern comedy classic about a shy young girl with a beautiful singing voice who is thrust into performing at a working man’s club by her selfish mother and her opportunistic boyfriend, is enjoying a welcome revival in a UK tour. It is at the Churchill Theatre, Bromley, until Saturday.

The trademark savagery of Cartwright’s humour is in evidence, as displayed by the irredeemable figures of Mari and her (slightly less loathsome) new man Ray Say. Mari is written as a dictionary definition of vulgarity – all loud mouth and lipstick – crass, selfish, and, worse still, self-pitying. The cupboards are bare and her introverted daughter neglected whilst Mari drinks and cavorts with Ray.

The unsophisticated romance of Ray and Mari is contrasted wonderfully by the gentle, shy courting of telephone engineer Billy and Little Voice, and the play is neatly structured around the rapid self-destruction and crude realism of the former versus the slow-burning charm and sheer fantasy of the latter.

In the midst of the polar opposite romances is the music. Little Voice was left a collection of vinyl records by her late father – all classic female divas such as Judy Garland, Liza Minnelli, Edith Piaf and Barbara Streisand. Little Voice’s world, so insular as to border on the autistic, bursts into life through these songs, which take on a resonance of their own as she lives her life and flies free through them. The theme of exploitation (nobody except Billy troubles to find out what Little Voice wants) is an important and timely one, especially in the wake of the glut of TV talent shows in which startled teens are regularly dragged to auditions by ambitious and avaricious parents.

The performances in this production are universally magnificent, and Jim Cartwright has pulled together a perfect ensemble. The star of the show Jess Robinson convinces as the shy Little Voice as well as singing wonderful impersonations of the female divas in a few (slightly gratuitous – but who cares?) medleys. Her love interest is played with understated humour by Ray Quinn, who is proving to be a highly capable character actor and a joy to watch. He makes the most of the few scenes he appears in.

The dreadful couple Mari and Ray are brought vividly to life. Last night’s show saw understudy Sarah Dearlove grab the opportunity with both hands and turn in a hysterical performance, but with enough nuance that you grow to loathe Mari. Simon Thorp is simply superb as Ray Say. His mannerisms and comic timing are impeccably observed, and the stage loses a touch of energy whenever he leaves it. Comedian Duggie Brown is astutely cast as Mr Boo, the club MC and stand-up (who has some enjoyably painful patter with the audience before the show and after the interval); and Sally Plumb (last seen by us in the highly-rated London debut of Wesker’s Denial) is hilarious as the monosyllabic Sadie, the gentle neighbour who puts up with a torrent of abuse from Mari. There’s a riotous moment when Mari and Sadie dance to the Jackson 5 which drew a spontaneous round of applause.

The Rise and Fall of Little Voice is a skilfully constructed northern comedy with a strong musical element. It isn’t a family show, owing to the coarseness of the language. Such humour may prove divisive too, and prudes may be advised to steer clear. It’s hard not to laugh at Cartwright’s deliciously constructed vulgarities, but you have to enjoy northern humour to get the most from the play. There are jokes at the expense of everyone, but the witty Mari (her lively mind is perhaps a saving grace) often directs her jibes at the size of her obese friend Sadie, and cruel humour is part of the bargain here.

The only real weakness of The Rise and Fall of Little Voice is that, after a perfectly-structured first half, the second feels much more fragmented and displaced. Nevertheless, it builds towards an emotionally satisfying pay-off; and this production benefits from being directed by Cartwright himself, who has a very strong grip on his artistic vision.

The Rise and Fall of Little Voice is a very good play with a welcome musical element, which is exceptionally performed by this cast. It’s fantastic to see a great example of northern humour and a realistic depiction of working class Lancashire life play across the UK. Catch it while you can.