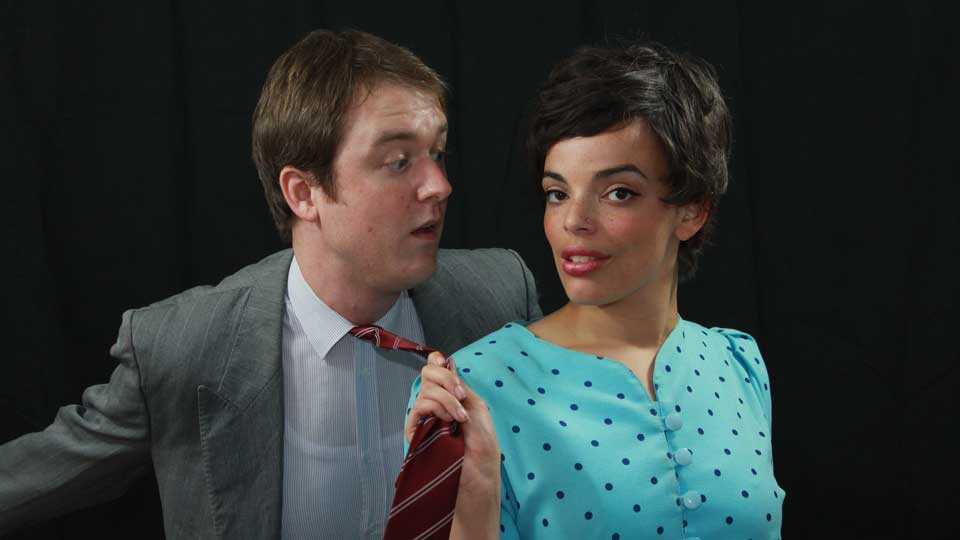 A ‘newsical’ (see what they did there) based very, very loosely – if at all – on the life, times and loves of veteran 80s newsreader Michael Buerk (his name alone bestows such scope for affectionate send up). What can we say – this unexpected production from Tom Bailey and Greg Jameson’s delivers exactly what it says on the (incredibly random) tin. But approach it with caution, as the very specific vein of humour in question isn’t for everybody.

There’s something about this inexplicable, bizarre but incredibly original premise that immediately ignites the curiosity; especially in the shadow of Margaret Thatcher’s death, and the subsequent reevaluation of 70s and 80s British culture, revisited on documentaries through grainy 70s and 80s news footage. Plus, there’s something about the man in question – he may not be as beloved as, say, Trevor McDonald, but anyone of a certain age who used to BEG to stay up to watch ‘999’ as kids will probably possess the relevant dormant fascination with Buerk to understand this show in all its throwback, absurdist glory. But if, by this point, you have absolutely no idea what we’re talking about (indeed, if you’re too young to remember Buerk), suffice to say, this won’t be the show for you.

Writer Greg Jameson doubles up as the titular character, channeling a gentle impersonation of Michael that’s not rooted in malice or disrespect; a sweetly-voiced Helen McDonald stars alongside him as the iconic Moira Stuart – another blast from the past. Neither Jameson nor McDonald seek to present Buerk or Stuart as the steely stoics you and I are probably familiar with (despite a well-pitched musical number about news presenters seldom expressing emotion on air); rather, they offer warm and affectionate musings on what the pair might’ve been like once the cameras had stopped rolling, ultimately pointing out what a fabulous power couple they would’ve made en route. Whether the play would’ve worked better had the characters been completely nonfictional, with their own names, albeit with heavy hints of the TV veterans in question, it’s hard to say.

Thus the performances and the play itself provides a curious if haphazard blend of fiction and nonfiction (the former far more prevalent) that challenges the memory and disorientates the audience. As the play progressed, the plot – concerning overzealous weatherman Ian McCaskill (played with excellent comic timing by Ollie Burton), and his attempts to steal Stuart from Buerk by summoning freak weather conditions that Buerk’s sent to the far ends of the earth to report on – becomes decidedly more nonfictional, more ridiculous, more hilarious. Cue a Live Aid subplot and an absolutely bonkers impression of Bob Geldof (complete with drunken-sounding, rambling accent) from Warwick St John and many audience members were in stitches.

But for the rest, this was a challenging play. The simplistic production values do little to aid the lost audience members’ understanding of the zany, fast-moving plot, and there were fluffed lines and heavy-handed jokes that really didn’t need to be there. As a venue, Network Theatre – found in the middle of Waterloo train station – is strange but charismatic, much like the show it’s hosting; unfortunately its acoustics are dreadful, and as such the house band routinely overpowers the actors: volume adjustments and better vocal enunciation might thus ensure the songs’ messages are not lost in future. It needs polishing, but there is a raw observation of a certain era of television here that’s very astute and very intelligent; the farcical, surreal element a loving homage to the kind of shows many of us loved growing up.