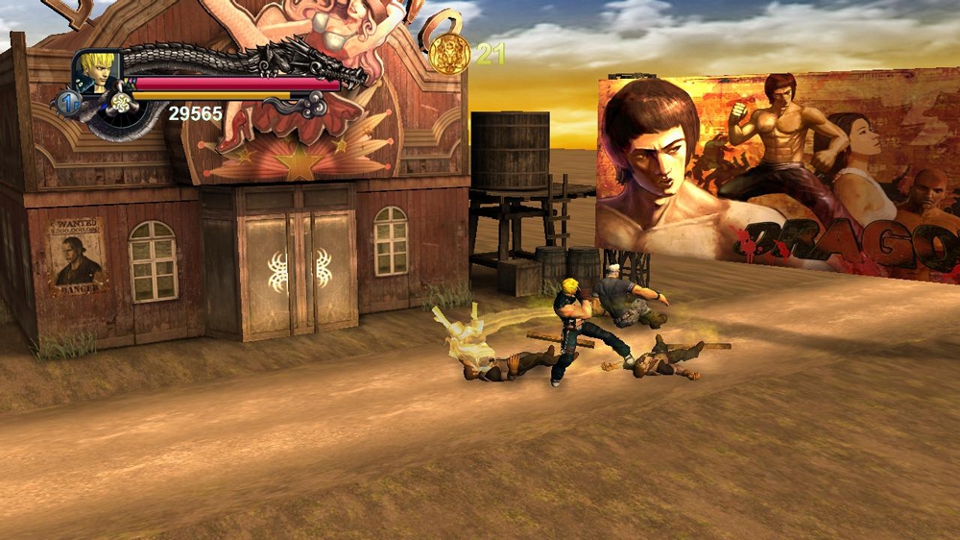 Double Dragon II: Wander of the Dragons is a remake of Double Dragon II: The Revenge from 1988.  The remake was created by South Korean developers Gravity. We took a look at the XBLA game to see how they got on updating the 25-year old classic.

The game brings back protagonists Jimmy and Billy Lee who are both skilled martial artists. For some reason the developers decided to do away with their iconic bright red and blue outfits. Instead they’ve opted to dress them in much darker colours.

Before you get to play as the Lee brothers the game opens up with a short introduction level which also acts as a tutorial. Here you play as Billy’s girlfriend Marian and learn the terrible controls that you’ll be using to play the game. Marian ends up getting shot to bits by Willy, the leader of the Black Warriors.

This understandably upsets the Lee brothers who go on a violent rampage to take down the Black Warrior gang and avenge Marian’s death. Many of the characters from the original game return such as grunt William, pirate wannabe Roper, sub boss Abobo, the masked fat man Burnov, Boujutsu master Chin Taimei and of course Willy. The game features a small history section with badly translated bio’s for each character.

The main attraction is the story mode where you fight through the fifteen stages. This remake has remodelled the environments in 3D but has kept the side-scrolling gameplay. This keeps it more true to the original but it would have been nice to see a remake brought up to today’s standards. What it does mean is that the gameplay feels very old and you are restricted to attacking in eight directions.

As mentioned the controls are terrible with kicks mapped to B and punches mapped to X. Hammering these buttons is required to perform combo attacks which fills your power gauge. This can then be used with your attacks by tapping RT for a power attack. Guarding is done via LT and LT while tapping back does a dodge (when it works). If you tap LT as you’re attacked you can perform a guard impact which is a perfect guard that sets you up for a counter attack. The shoulder buttons are utilised for a backward elbow strike which is designed to help when you are surrounded. Finally you also have access to four special moves such as a spinning Tornado Kick or Dragon Gust pushback by using a combination of RT and one of the face buttons.

On paper this all sounds lovely but the implementation is incredibly poor. Attacking or taking damage uses up your stamina bar. This becomes a problem when surrounded as you end up with no stamina to return the attacks. Once knocked to the floor the enemies will relentlessly attack making it near impossible to get back up. Often, especially on boss fights, you rely on your 20 continues to help you progress. When you die you can instantly respawn using a continue which performs a powerful attack that hurts and knocks down enemies around you.

The character animations are bad and very limited. All attacks feel sluggish and you see the same animation over and over. When you perform a power attack you get to see the same animation as normal attacks but in slow motion. The game occasionally tries to mix things up by having you pull a level, climb a ladder or take part in bizarre and pointless QTE sections. One level takes place in a Chinook helicopter and after each wave of enemies it tries to fall out the sky while you must press the B button for a few seconds. Exciting stuff.

In addition to the story mode there’s a versus mode where you can fight against a friend and a survival mode that puts you against endless waves of enemies. The game only features local co-op with no option to play over Xbox LIVE. However there are leaderboards should you wish to try and be the best in the world.

As bad as the rest of the game is the sound deserves a special mention with horrid looping music, poor sound effects and rubbish voice acting. Not even the subtitles are correct with completely different phrases and endless mistakes.

Double Dragon II: Wander of the Dragons isn’t just a bad game, it’s actually one of the worst games we’ve ever played. How this has made it onto XBLA we’ve no idea but we’d advise you to stay well clear or if you’re somehow still curious please at least try the demo first.

In this article:Double Dragon II, Fighting, Gravity, Wander of the Dragons, XBLA