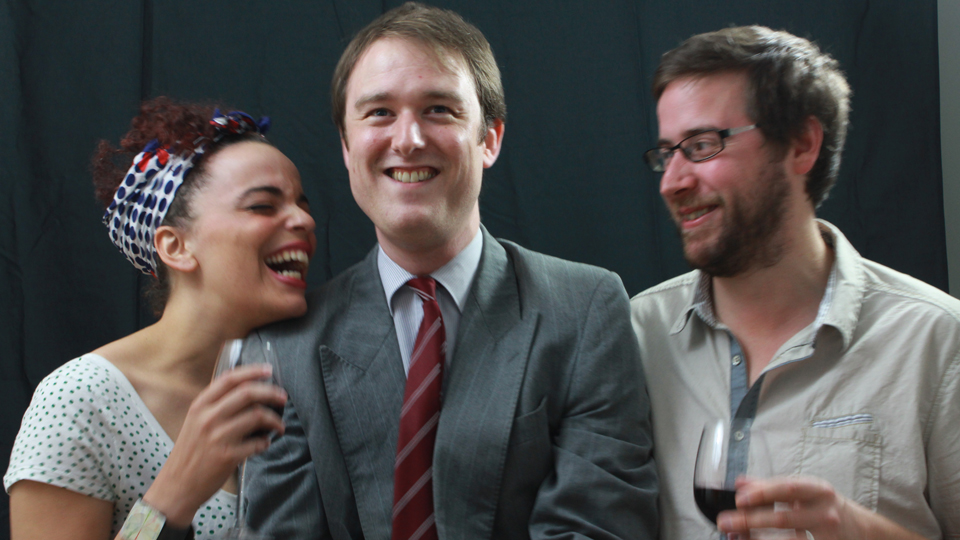 Premiering at the Seven Arts Theatre in Leeds this weekend was Buerk! The Newsical, a breakthrough musical by Tom Bailey and Gregory Jameson. Charting the fictional fall and rise of BBC journalist Michael Buerk and his (extremely fictional) love affair with Moira Stuart, the two-act show is a warm-hearted and bawdy celebration of all things Nineteen-Eighties.

Spotted by a crazed BBC News Editor and quickly fast-tracked to The Nine O’Clock News, Buerk (Gregory Jameson) is soon shoulder-to-shoulder and cheek-to-cheek with glamorous newsgirl Moira (Helen McDonald). Feeling very much aggrieved is lusty weatherman McCaskill (Ollie Burton), who musters all of his metrological voodoo to summon the great storm of 1987. A globe-trotting extravaganza of music, Mugabe and mulligatawny ensues as the two media heavyweights battle it out to win the woman of their dreams.

Stylistically Buerk! is a very unique show, delivering a quirky musicality akin to The Producers, with comedic shades of The League of Gentlemen and Extras in its well-meaning mockery. There is a great sense of fun and celebration in the show, which is introduced by co-writer and director Tom Bailey, recalling Charles Grey’s infamous narration inThe Rocky Horror Picture Show. Bailey’s interjections provide a great sense of audience inclusion and showmanship whilst also allowing scenes to take off and run at rapid pace. From the outset Buerk! tears along and locations jump from studios to pubs, from plains to Thames, as Buerk becomes the cuckold to McCaskill’s appetite for Moira. The humour comes unremittingly quickly and doesn’t shy from gross-out cycles of character-based comedy. Buerk, for instance, is almost retching when the Editor explains that having intercourse with his mother is really quite pleasant, “once you get past the bandages and the bedsores.”

The writing continuously references Eighties figures and history, which is rewarding to an audience who have some knowledge of the period, however it is non-essential to the plot and more importantly, the humour is independent of these details. Whilst the writing relishes some shockingly beautiful vulgarity (which I don’t have the gall to repeat), it also offers warmth and pathos through Buerk’s journey to redemption, from his lowest despondency, by him simply being good, honest and strong. It’s a small morality tale and a hallmark of sophisticated comedy writing.

Buerk!’s characters are meticulously written and realised through a highly dynamic and talented cast of memorable performers. Co-writer Gregory Jameson takes the mantle of Buerk in a perfectly pitched performance which is both angelic and dramatically powerful at the denouement. Always the victim of fortune, Jameson’s saint-like style instantly has audiences rooting for Buerk to win out and succeed.  With a sad innocence comparable to Monty Python’s infamous Brian, Jameson’s honesty and bewilderment at the hands of several grotesque characters is totally captivating whilst hilariously endearing. A vivid counterpoint is Stephen Mosley’s Editor, a certifiable media mogul who gesticulates wildly with a boundless energy punctuated only by spins, jogs and showbiz kicks. He is the perfect compliment to Helen McDonald’s statuesque Moira; a study in elegance and charm who is utterly convincing as the belle of the BBC. Embodying a business-minded sophistication, McDonald recreates the newscaster as vivacious, stoic and sexy news-goddess who doesn’t suffer fools gladly. Which brings us on to McCaskill, the capering villain of the piece played with teeth-bearing brilliance by Ollie Burton. A hellion grotesque, Burton cuts shapes of Richard III as a leering mass of “perfidious weather obsessed scum” and crawling sycophancy. Burton’s hate-filled rock-soliloquy, which prays vengeance on Buerk by “the power of Mugabe”, is as breathtakingly epic as it is hilarious and arguably one of the high-points of the entire show. So high value is Buerk! that even Bob Geldof crops up in Africa, in an irresistibly charismatic performance by Warwick St John.

Buerk! capitalises on its lightly dressed set as a pack-up-and-go show destined for the Fringe. What it may lack in unnecessary scenery it more than makes up for in stagecraft and musicality, which is no less evident than in its house band, The World Service. Musicians Mark Kingston and Allan Stelmach have combined with the writers to make Buerk! a bona-fide musical experience, with fully scored pieces utilising drums, bass, keyboards and electric guitar. The score mirrors the writing in its fast pace and referential style of humour, blending seamlessly into scenes of pure performance comedy. There are phrases within the music which may sound familiar, particularly the theme prior to Buerk winning his contract to present accident-based horror documentary 999. Buerk! isn’t simply a funny show with some songs, it’s a hilarious barrage of gags fused seamlessly with a superbly scored soundtrack.

Buerk! is guilefully cheeky, funny, fresh and endlessly creative. It offers a unique opportunity to experience a pooled talent of cutting-edge writers, performers and musicians in a show which simply must be seen to be believed. You’d be a berk to miss it.