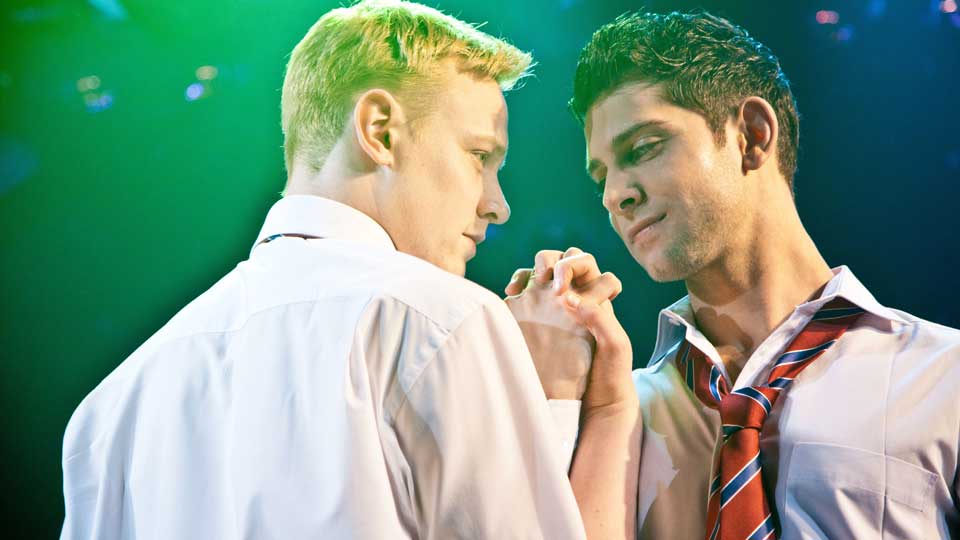 Peter (Michael Vinsen) is a pupil at St Cecilia’s Boarding School trying to fit in with the popular crowd to survive the school year. Unbeknownst to his classmates, Peter is in a relationship with the popular boy Jason (Ross William Wild) with the two stealing moments together away from the prying eyes of their fellow boarders. Peter decides that he wants to come clean about their relationship to his mother Claire (Yvette Robinson) but Jason wants to keep things under wraps fearing repercussions from the other boarders and his family. With the backdrop of religion and a production of Romeo and Juliet to concentrate on, Peter and Jason’s relationship is put to the test, especially as bitchy Ivy (Lilly-Jane Young) has her eye on Jason too.

Bare The Rock Musical was first performed at the Hudson Mainstage Theatre in Hollywood back in 2000. Billed as a ‘rock musical’ the show crams an impressive amount of songs into its 170 minute run time (there’s nearly a half-hour interval included in that too) but the songs are from a variety of musical genres not just rock. The show opens with Epiphany as Peter is singled out by his classmates for his sexuality in a nightmarish dream-like sequence that takes place in the school chaplain. From that point on the musical picks up speed whizzing through song after song delivering a surprisingly strong narrative packed with plenty of twists, drama and emotion.

The main focus of the story is the inter-twining lives of Peter, Jason and Ivy. Peter feels ready to tell the world about his love for Jason whilst Jason isn’t as keen to let his secret out. Instead, for the sake of his classmates, he plays the stereotypical role of the popular guy who all the girls want and the boys want to be. He uses Ivy’s attraction to him to cover up his own insecurities not considering the affect it would have on her if she discovered he was gay. As the musical progresses Ivy is pushed closer to Jason as Peter is pulled further away. He also has his misfit sister Nadia (Melanie Greaney) to consider who has no idea about her brother’s sexuality but makes herself an enemy with Ivy.

The struggle of the three students takes place against the backdrop of religion. At times the show reminded us of Cruel Intentions with all of the characters rebelling and lashing out against the confines of their environment. Religion puts a big question mark over both Peter and Michael’s relationship as they question whether they would be accepted or punished by God for their supposed sins. Their priest (Matt Harrop) serves as their therapy through confession but really it’s Sister Chantelle (Hannah Levane) who proves to be the guiding light that Peter is so desperately looking for.

The success of Bare lies in its extraordinarily gifted cast. Ross William Wild, Michael Vinsen and Lilly-Jane Young each rise to their roles and carry them off with gusto. Wild is perfectly cast as the undeniably handsome and seemingly confident Jason. He oozes confidence throughout the performance but has the ability to draw out the emotion when he needs to using those striking blue eyes to great effect. Some of his best scenes are when he is alone on stage with Vinsen as the two create a believable chemistry that has you rooting for them from the start. He also has a strong singing voice which is put to great use throughout the show. Vinsen brings an emotional vulnerability to Peter shining brightly during the song See Me where he calls his mother in an attempt to finally reveal his sexuality to her. His performance captures youthful innocence and naïve hope. Young really fleshes out Ivy, a character that could so easily have been very two-dimensional, giving her the appropriate mix of minx, bitchy popular girl and insecurity. She possesses a remarkable singing voice with the ability to emote whether she’s near whispering her lines or performing at full-belt. It’s a credit to Young that you can see past Ivy’s exterior and feel something for the character.

Outside of the main characters Melanie Greaney steals a few scenes as the terminally unhappy Nadia. Her performance of Plain Jane Fat Ass is one of the standout moments of the show as she showcases her character’s discontent with how she is perceived by her classmates and family. Hannah Levane really surprises with her powerhouse performance as Sister Chantelle. Seemingly a very minor character at first, she soon shines in a dream sequence where she (backed by Rosanna Yeo’s Tanya and Fia Houston-Hamilton’s hilarious Kyra) tells Peter to be honest about his sexuality during 911! Emergency.

It should be pointed out that the rest of the ensemble is fantastic too. The Voice UK star Jordan Lee Davies, Dan Krikler, Dean John-Wilson, Natalie Chua, Liam Ross-Mills, Dales Evans, Matt Harrop and Yvette Robinson all add to the production and lend their impressive vocal talents to the show. Their energy helps to drive the show meaning it never drags or feels dull.

Bare The Rock Musical is a fantastic show. What could have been a rather frothy and light production surprises by offering depth and plenty of emotion. Exploring sexuality, religion and growing up, the show is poignant and as relevant today as it was on its debut 13 years ago. Packed full of memorable songs and a strong story it’s one of the best shows we’ve seen in a while. Ross William Wild, Michael Vinsen and Lilly-Jane Young all have bright futures ahead of them and we can’t wait to see what they do next.