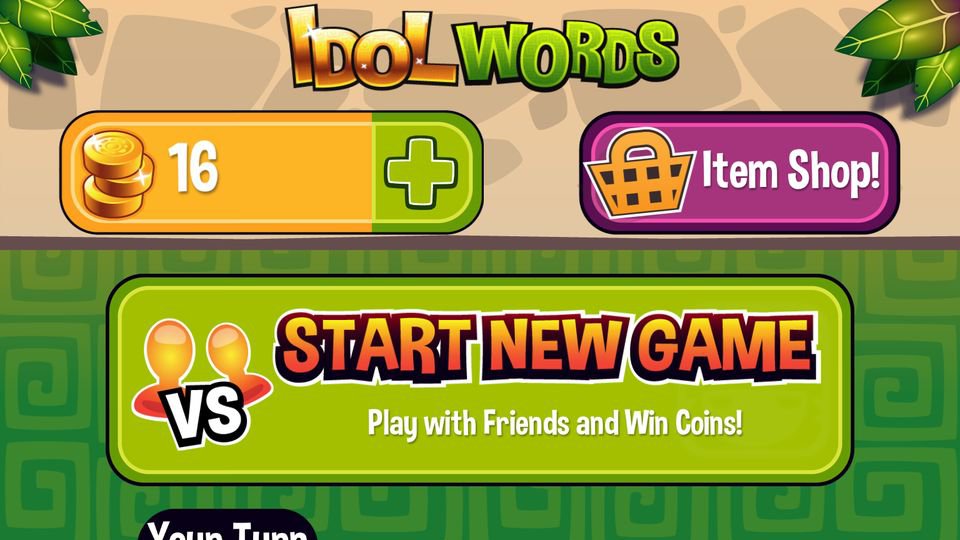 Idol Words is a new word puzzle game from Dundee based Outplay Entertainment. The game is available for free on iOS with versions optimised for iPhone and iPad. As with many free games players also have the option of paying microtransactions.

The game features a jungle theme and casts the player as an adventurer who must find words hidden in ancient temples. Other than presentation the theme adds very little to the game. Players of Draw Something, Song Pop or the more recent Questionary will find the game instantly accessible as it follows a very similar setup.

Once you start the game you can choose to link up with Facebook to challenge friends, search for people you know via email, send an email to challenge someone or initiate a match with a mystery opponent. We found the variety of options made it easy to get into a match within a few seconds. Matches take place over three rounds with the best of three taking home the prize of virtual coins.

The game is set on 4×4 grids of random letters and is a bit like a word search mixed with Scrabble. Your job is to find as many words as you can within the two minute time limit. Each time you make a word the game calculates the score for that word and the letters used are coloured in. Letter can be used more than once but you cannot spell the same word again on a single grid.

Some letters are given bonus coins if you use them and others have score modifiers like in Scrabble such as Double Word or Triple Letter. If you manage to fill in every letter on a grid then the game bumps up your score and you are presented with another grid. The more grids you get through the higher the bonus score.

Once you’ve completed a round you must wait for your opponent to take their turn before you can move onto the next one. If a player resigns from a game then they forfeit the win and the coins go to the remaining player. While you wait for an opponent to play you can jump into another game until you run out of your allocated game slots. Players who wish to run extra games can purchase an additional 12 game slots for £1.99.

Coins are important to buy boost items such as Freeze Time, 4x Score Multiplier and Quick Flip. If you’re playing against a player that is using boosts then it is tougher to win if you aren’t. After winning a bunch of games you should have enough coins to buy some boosts but you need to keep winning to replenish your coins.

For players who don’t mind microtransactions you can also buy coins from the in-game shop. These start at 450 coins for £0.69 up to 19,800 coins for £19.99. The more you spend the more bonus coins you are given. Spending £2.99 or over also has the bonus of removing advertising which pops up in banners at the bottom of the screen and as fullscreen videos in-between games.

To keep you coming back for bragging rights there is also a daily challenge that you can play against your friends or the world. These feature a new word grid every 24 hours along with leaderboards to track your performance. You are allowed a free-play each day but it costs an additional 10 coins per play if you want to try again.

Idol Words is a fun and addictive game that will satisfy word puzzle fans. It’s a perfect game to pickup for a few minutes and especially fun when competing with friends. It’s also good for practising spelling words and suitable for players of all ages.

Download Idol Words for free on the iTunes App Store.