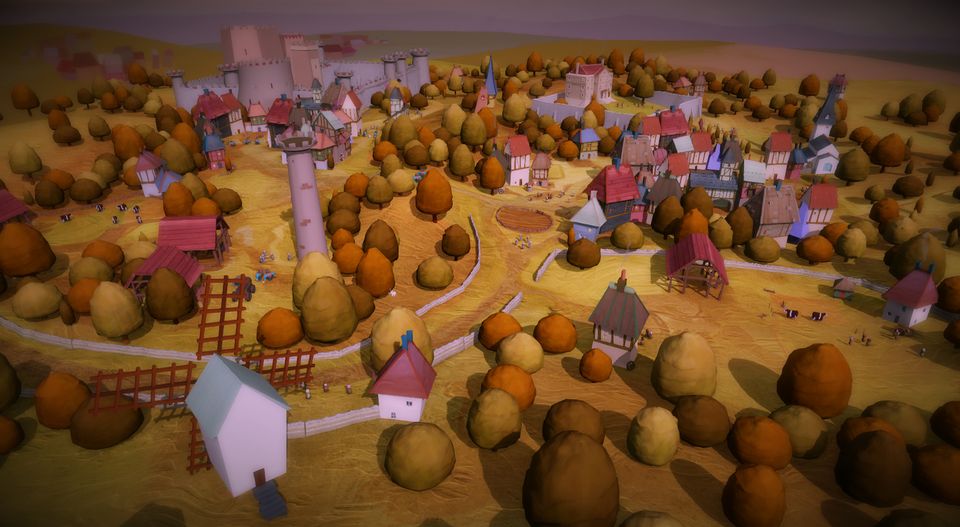 Death Inc. comes from the minds at Guildford based indie developers, Ambient Studios (Monster Meltdown). The studio formed in 2011 from ex-Media Molecule staff and has since grown. Having previously worked on games such as LittleBigPlanet, Fable, Burnout and Need for Speed we were excited to take a look at their new game.

Initially the team tried to fund the development of the game via KickStarter with a goal of £300,000. Despite a lot of interest and support they unfortunately fell short in their crowdfunding campaign with only around 40% of the goal pledged. Undeterred by this Ambient decided there was enough interest in the project and are continuing to pursue it. We’ve been spending some time with their first Alpha preview build to see how the game is shaping up.

The game features a mix of gameplay including real-time strategy, god game and business simulation to create a unique arcade strategy title. The game is set in 1660’s England where you play as Grim T. Livingstone, an Assistant Underreaper at the Ministry of Mortality. Grim decides to do things his own way and creates Death Inc. with the intention of becoming the Nether’s premier mortality outsourcing agency. You can probably already tell that this is a game with a sense of humour.

The Alpha build is small in scope and features a single skirmish level to sample. The game may change immensely during development and will likely be influenced somewhat by feedback from players. The aim of the level is to hunt down and defeat a Nobleman by spreading a little fear, pestilence and plenty of bubonic plague along the way.

The level is played against a timer which you can replenish by harvesting the souls of the humans you infect. The timer keeps the pressure on and forces you to continually push forward. Harvesting souls is done by dragging your hand over them as they appear on screen.

Starting with peasants you must gradually infect more in order to have the numbers to take down tougher humans. To help with this Grim has a couple of special abilities. When he comes upon infected crates or buildings he can call in a plague of rats which can infect and cause a distraction. His second ability lets you call in a wave of infected pigeons to cause damage and infection from above. It’s also possible to infect cows which you can then use like suicide bombers by sending them in first to explode and soften up the humans.

As you make your way to the Nobleman the size of your infected army will grow as long as you pick your fights sensibly. Taking out the weaker humans first before tackling the tougher ones is the best approach. Hopefully by the time you face off with the Nobleman you should have enough bodies to take him down. After attempting a level you can see how you did by your placement on the built-in leaderboards.

In its current form the game feels quite basic but there’s enough to get a taste of what is to come. The control system seems to be aiming for simplicity but we found it quite frustrating at times. The pathfinding of your infected can be quite poor and they often get stuck on things. We loved the humour of the game though and the cute cartoony graphics are gorgeous.

It’s early days for Death Inc. but it’s already shaping up to be an interesting title. With promise of arcade challenges, more humans, more abilities, physics puzzles and more via DLC Ambient Studios could well be onto a winner. EF will be following development of the game right up to its expected November 2013 launch.

If wish to follow the development of the game and try out the Alpha for yourself (as well as secure a preorder) you can do so via the Death Inc website from as little as $10. Should you have a little more cash to splash there are also various tiers available each with special bonuses such as future DLC, posters, soundtrack CD, your name in the game and more.