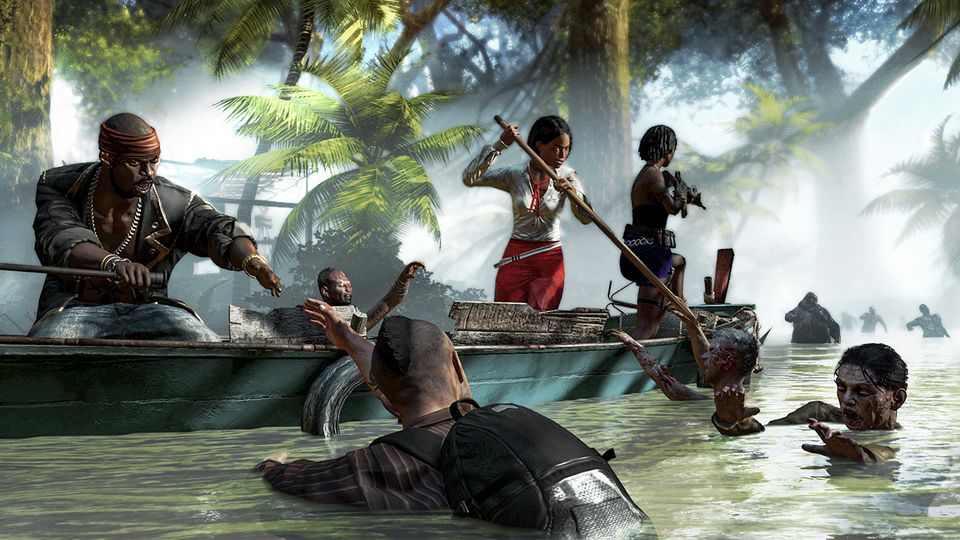 Back in February 2011 a CGI trailer was released for Dead Island. The trailer played out events in reverse of a family coming under attack by a horde of zombies whilst on holiday. It went viral and generated huge interest in the game. The game was never going to match the emotional impact of the trailer but succeeded in creating an open-world survival horror. We scored Dead Island a 9/10 and it was one of our favourite games of 2011. Dead Island Riptide was announced in similar fashion last September with a new CGI trailer which again went for emotion but didn’t quite have the impact of the original trailer.

Dead Island Riptide is a direct sequel to the first game and picks up straight after the events of the first game. After escaping from the zombie infested paradise island of Banoi the survivors find themselves aboard a military ship. During a freak storm the ship is overrun with the zombie virus which leaves the survivors stranded on a new island called Palanai.

The four protagonists – Logan (throwing weapons), Purna (firearms), Sam B (blunt weapons) and Xian Mei (sharp weapons) – from the original Dead Island return along with a new playable character named John Morgan. He comes with his own unique skills which include brutal hand-to-hand combat and a fierce kick. If you played the first game you can also import your character saves to continue your progress rather than starting with a fresh character.

If you do import your previous character they come along with all their experience and skills. Don’t worry though as this doesn’t give returning players an advantage. Instead the enemies are scaled to the same level to keep things challenging. In some ways this almost spoils the need to level at all and makes it feel like it’s there for the same of having it. One area the scaling does help though is in co-op as it allows players of different levels to play together fairly by scaling the enemies for each player.

Progress through the game is again controlled by a main quest-line and there are also plenty of side-quests on offer. You’re free to pick and choose what you attempt next but on the whole the world feels more restrictive than in the previous game. Boats feature heavily in order to get around and there are new zombie types to battle. There’s a new mission type that focuses on defending quest hubs. Here you must fortify an area and then work together with the NPC’s to keep the zombies out. During these missions survivors will get into trouble and it’s your job to save them and keep them alive or you fail the mission.

Environments are again littered with loot and you’ll constantly pickup weapons, items and food. The weapons upgrade system returns allowing you to use blueprints and items to upgrade your weapons. Once you’ve found a decent base weapon you can add all kinds of attachments to it such as electrifying a knife or sticking a saw blade on the end of a baseball bat. These are constantly entertaining and something that will keep you playing. Weapons tend to break often so you need to ensure you have a backup stash of them in your inventory.

The majority of your time in Riptide is taken up with zombie slaying which is repetitive but also heaps of fun. How you kill them will depend a lot on your character choice, where you spend your skill points and what weapon you are using. To prevent getting overwhelmed with zombies (especially when playing solo) you need to be aware of your environment, constantly move, knock zombies back and time your attacks well. Wildly swinging your weapon uses up stamina so you are forced to think a little before attacking. Once surrounded it can be hard to escape alive.

Hitting zombies in the right places with a decent weapon can take their heads or limbs clean off. If you knock them to the ground you can also perform a nasty finishing move such as stomping on their heads. Combat can still be frustrating though as it’s often hard to judge your distance from a zombie. Fortunately when you do go down you tend to respawn close to the action.

The game is again designed to be played via co-op and teaming up with friends is still the most fun way to play. If you don’t have friends to play with you can also take advantage of the in-game matchmaking which can help you find players who are at a similar point to you. Played solo the game is more challenging as there are fewer opportunities for tactical play.

Graphically Riptide is superior to the first game and the PC version looks nicer than console. The Chrome Engine still throws up some graphical glitches but the developers seem to have reduced them. At times we came across strange performance drops, especially where water was involved but we didn’t encounter any of the game-breaking issues like we found in the first game.

Dead Island Riptide is a bit like a big expansion pack for the first game. There’s plenty of new content which will keep most players busy for at least 20 hours. If you really enjoyed the first game then chances are you’ll love Riptide just as much. As mentioned above it’s not without problems but if you can look past these you’ll have a great time zombie slaying on Palanai.