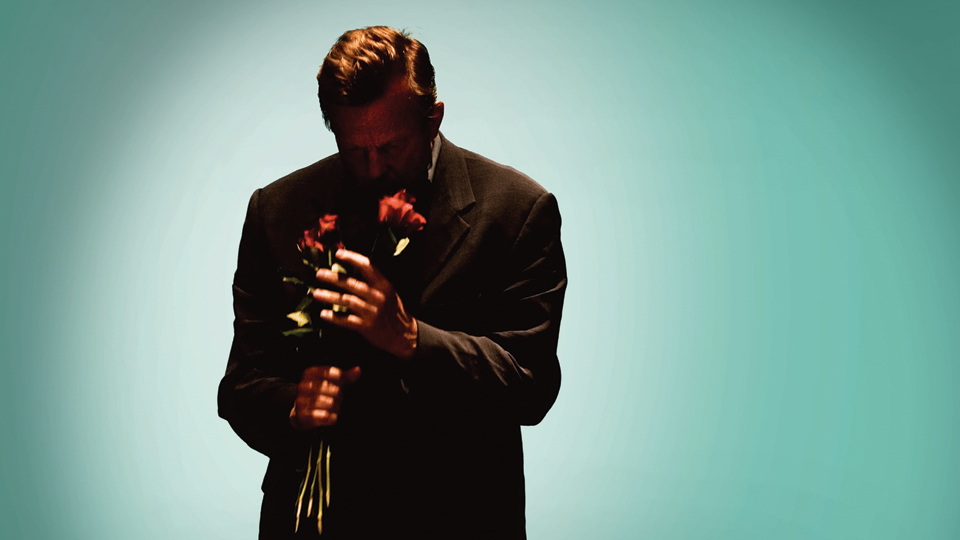 Doktor Glas, adapted from the classic Hjalmar Söderberg novel, is presented as a one-man one-act play about sex, death and the responsibility of the medical profession in its original language at the Wyndham’s Theatre.

Don’t panic if your Swedish is a little rusty: subtitles are projected above the stage (take your reading glasses). Whilst such an approach may seem unusual for a West End show that isn’t an opera, its justification comes in the shape of the star of the piece – Krister Henriksson, one of Sweden’s most renowned actors. He has won fans and admirers in the UK for playing the title role in the TV crime drama Wallander. Henriksson’s non-Swedish speaking fans are already used to half-watching half-reading his work, and Doktor Glas operates in much the same way.

There is so much written into Krister Henriksson’s handsome, hangdog face that he conveys and internalises nuanced emotions through the minimal of movement. His personification of a lonely and troubled early Twentieth Century GP is a masterclass in acting. The wonderful stillness of his screen performances are just as powerful on stage, and from the moment Doktor Glas washes his hands in his consulting room and starts to unfold his tale, you are in the grip of a great storyteller.

Doktor Glas has a chance encounter with the physically and spiritually loathsome Reverend Gregorius, though he takes him on as a patient. When the cleric’s wife Helga visits his surgery and asks the physician to lie to her husband about her health to prevent him from raping her, Doktor Glas quickly becomes infatuated with her. He is faced with the moral dilemma of lying to his patient to protect the woman he adores, and he soon finds himself contemplating greatly more immoral acts in the name of love.

Despite the heaviness of the subject matter, and possible preconceptions about Swedish culture, Doktor Glas is an often-funny piece. Henriksson rarely has a chance to showcase his comic timing in the bleak Scandi-crime series that has made him an international star, but with the stage to himself, and a co-directorial credit in the programme, he has very successfully moved in the direction of finding the comedy in very human situations. The Swedish sense of humour – using irony and the power of understatement – is not dissimilar to our own, and Doktor Glas translates wonderfully onto the English stage.

That’s not to say that Doktor Glas doesn’t have its moments of heightened emotion, and Henriksson gives off an angst that at times borders so close to deranged as to be genuinely frightening. Glas isn’t an easy character to categorise, but Henriksson’s take on him is emotional, idealistic and scarily amoral.

Söderberg’s startlingly modern story encompasses a range of moral issues, most pertinently a husband’s conjugal rights versus women’s rights. Glas’s disgust and moral outrage at the Reverend bullying his sick wife into having sex will retain its power so long as there remain cultures and societies where women are subjugated. A medical man betraying his Hippocratic Oath is quite a well-worn story (Doktor Glas has some plot similarities to Bernard Shaw’s The Doctor’s Dilemma) but it’s given an original twist here. The hypocrisy and sanctimony of religious figures – topical since the advent of organised faith – is picked out with delicious irony in the text and delivered with relish by Henriksson.

One-man shows can be wearying for using only one voice, and for telling a story after the event without the drama playing out before your eyes in the present. Doktor Glas retains the interest through the talents of two extraordinary storytellers: Söderberg and Henriksson. It’s a fascinating, nuanced and well-structured piece, full of memorable bons mots; and Henriksson uses his versatility to create instantly recognisable characters. Hunched double with sex-pest breathing indicates the Reverend Gregorius, and the journalist Markel is also distinctively characterised. Sustaining the pace and interest alone for ninety minutes is no easy task, but Krister Henriksson commands the stage with a lightness of touch and a delicacy of delivery (aided, unusually, by a mic).

It’s designed in such a way that Glas’s consulting room is deep, with a false perspective, but the apparently drab green walls project some startling colours (the dark red is heavy with ambiguous symbolism). Shapes appear too, notably the skeletons of bare trees which offer a sense of the outside; and the clock on the wall cleverly doubles for the moon. Within that framework Henriksson tells the whole story with minimal props (a chair, a towel, a handkerchief, a stethoscope and an all-important bunch of red roses being the extent of it).

A few musical interruptions and an odd modern song choice aside, Doktor Glas is a terrific production, and makes Krister Henriksson’s West End debut a resounding success. He delivers a magnificent and engrossing performance, whilst bringing a great adaptation of a Swedish classic to UK audiences. It wins you over through its sheer intensity.