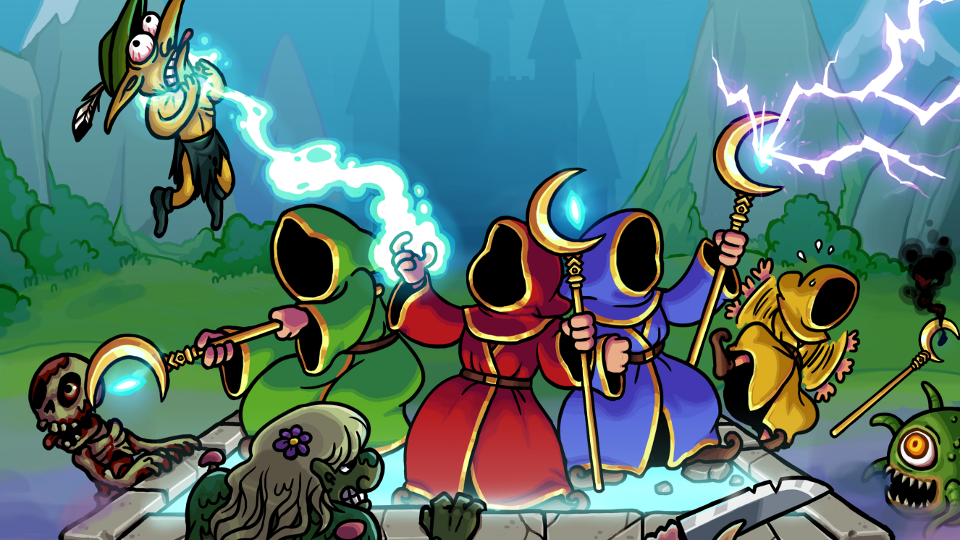 Magicka: Wizards of the Square Tablet is developed by Paradox Interactive and is a reworking of their popular Magicka games that were released on PC. This new title is designed for tablets and there are currently versions for iOS and Android.

Playing as a robed wizard who has been cursed you must set out on a quest to rid the world of monsters and other things. The game is packed full of humour and begins with a set of simple tutorials to get to grips with the game. Once you’ve done these you can choose to go for more advanced tutorials or just jump straight into the game.

Once you begin your quest you are presented with a map of the immediate area. On the map are several locations you can visit and each of these features a quest. Some quests progress the story while others are side quests. You can always choose which available quest to attempt or go back for another crack at one you have completed. Each quest has Normal and Hard difficulties and completing them rewards you with coins known as crowns.

Killing enemies also earns you crowns and these can be spent in the armory to upgrade your weapons and robes or to purchase familiars and scrolls. Familiars are pets that aid you and there are many different types including ones that revive, heal and defend you. There’s a large variety of weapons and robes on offer that come with hilarious names and descriptions. Items come with various stat boosting properties such as magical resistance or more damage.

Earning enough crowns to afford the more powerful equipment can take a long time but the game also supports microtransactions. These allow you to buy predefined numbers of crowns from 1,500 to 100,000. I appreciate some players aren’t fond of microtransactions but they are completely optional and a nice way of supporting the developers.

When you start a quest the action is viewed from a side-scrolling 2D perspective. The graphics are very bright and colourful with a very cartoony aesthetic. The new look compared to the isometric view that PC gamers may be familiar might initially upset fans of the series. However once you’ve played the game you’ll understand why the developers chose it.

Controls are all touch-based and very intuitive. Moving your wizard is as simple as tapping on the screen. Most of what you’ll be doing though is casting spells and the way this works will be familiar to Magicka fans. Along the bottom of your screen are seven orbs representing different types of magic, these are – earth, fire, ice, life, lightning, water and shield. These can be tapped in order to add them to your current spell up to a maximum of four taps per spell.

The spellcasting is absolutely brilliantly implemented and a lot of fun to experiment with. If you’ve done the tutorials you get an idea for different types of spells to cast. Tapping a single orb and then tapping on an enemy will cast that type of spell. So fire will cast a cone of flame while lighting will do the same with lightning. If you tap more than once on the same orb then you can make the spell more powerful.

In addition you can also mix orb types so casting fire with life will give you a long range fire beam. Casting earth and fire gives you a chargeable fireball projectile. You can cast spells on yourself such as fire to dry you off or a shield to protect you. If you mix a shield with a spell type then you can cast on the ground to create barriers such as a wall of fire. It’s also possible to grab enemies by holding on them and then you can use multi-touch to cast spell at them or just throw them around the screen. The game teaches new spells throughout but experimenting and finding a correct combination allows you to use them. Certain elements don’t mix though and will cancel each other out.

As fun as the game is in singleplayer you can also hop online and play with up to three friends (or strangers) in co-op. A neat thing is that the game allows iOS and Android users to play together. We found joining a game can be problematic but it never took more than a few attempts to find people to play with.

The multiplayer is the same as the singleplayer game just with a party of four wizards. The game might seem hectic in singleplayer but it’s even more so in multiplayer. When playing in co-op it helps greatly if one wizard focuses on healing up the rest of the party. The best thing about co-op though is that the developers have purposely enabled friendly damage. While trying to destroy the monsters you’ll often fire off a spell and see it hit or kill one of your party. This can lead to mini-battles between wizards and it’s just a lot of fun. When you go down in multiplayer a fellow wizard can revive you and this is needed most when fighting boss battles.

The game also features a Book of Knowledge that keeps track of all the Magicks (spells) that you learn, enemies you meet, achievements you unlock and it even contains useful advice. The enemies section is updated each time you face a new enemy and the book describes them, their health and also which types of magic they are immune and weak to.

Magicka: Wizards of the Square Tablet is an excellent game with fantastic controls and a brilliant multiplayer. It’s not a game that will keep you playing for hours but it is one that you’ll keep coming back to for a few quests every now and again. Fans of the original PC game or anyone who likes action games should definitely check it out.

Magicka: Wizards of the Square Tablet costs £1.49 on iTunes for iPad or £1.32 on Google Play for Android tablets.