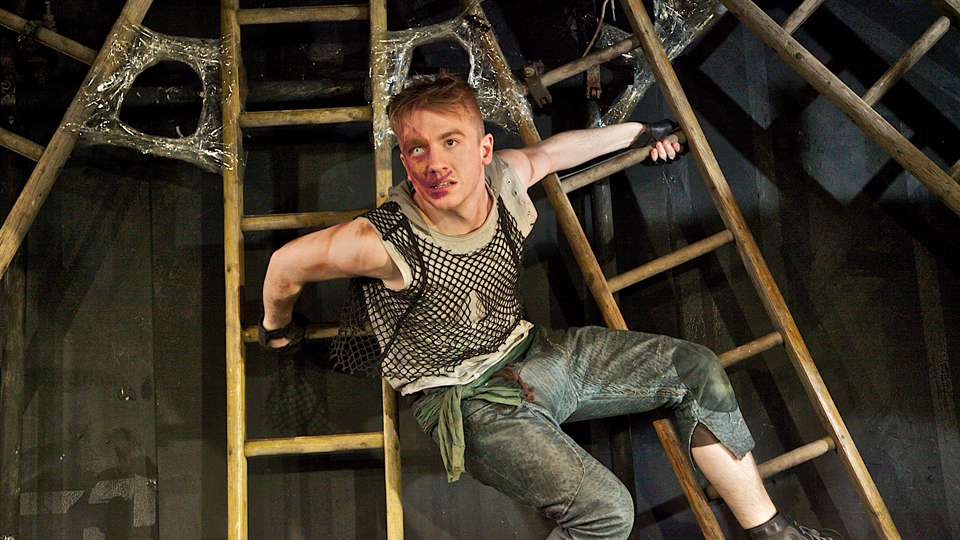 Photo by Francis Loney.
Yet another example of a classic story that, for a few generations at least, Disney afforded a cutesy 90s makeover and made its own (and with fantastic results in this case at least). However, there’s nothing cute or charming about this version of Victor Hugo’s original story Notre Dame de Paris – directed by Robert Chevara and based on the musical adaptation by Lionel Bart – except perhaps the fantastically beautiful voice of Zoe George as Esmerelda. This reworking stays more faithful to its base text; and as such it’s smeared with sex, violence and a finale as bleak as any Shakespearean tragedy.

Steven Webb and Zoe George as Quasimodo and Esmerelda. Photo by Francis Loney.

The end result is a mixed bag, albeit the tone is passionate and unique. First up is Steven Webb, whose take on the titular character is interestingly pitched. Riskily, he gives Quasimodo a speech impediment, but it’s so finely executed it pays off (albeit the effect dulls a bit when he puts it to one side for his musical numbers). You believe him when he professes his own ugliness and loneliness – commendable, given the non-attempt to disguise Webb’s own attractiveness (the irony here is a little predictable). Crucially, so thoughtful is the performance that you leave feeling you know a lot more about Quasimodo’s personality than that of the actor playing him. You’ll have little idea how Webb stands, speaks or conducts himself in real life off the back of this performance, which implies the transformation he undergoes every time he steps on stage.

Elsewhere, Webb is supported by an energetic and largely young cast, and there are no weak performances to speak of, but as a whole, something doesn’t quite work. One can’t help but wonder if some of the roles would’ve better suited more seasoned actors. Indeed, Helen Sheals who plays Pacquette, Esmerelda’s aggressively gypsy-hating long-lost mother has the most panache, and is the most convincing conduit of the story’s dark themes. James Wolstenholme also works hard, alternating between Quasimodo’s foreboding adopted father-figure Claude Frollo and a crazed member of the Parisian underclass. James Hume as Pierre Gringoire, the friendliest of Esmerelda’ s many suitors, is also pretty good, and is a great match for George: their voices merge seamlessly and create a pleasing texture on the score’s soaring ballad Abra Cadabra.

Singing and acting aside, it’s the production’s costumes and set design that makes the biggest impression, and not always for the right reasons. The latter, comprised of decorative ladders, layered scaffolding and stretched, transparent plastic that resembles a giant cobweb is certainly one of the most imaginative and attention-seizing uses of the King’s Head Theatre’s limited stage space in recent memory, but it does nothing to recreate the allure of the beautiful, otherworldly building that is its own character in the story. The costumes, meanwhile, won’t be to everyone’s taste, and that’s putting it mildly. Tie dye, ripped fish net vests, bright red leather trousers and studded belts abound, as well as plenty of other familiar artefacts of eras not long passed that will strike fear into the hearts of many audience members (having said that, the look is clarified somewhat by the thoughtful addition of costume illustrations and mood boards in the programme). Certainly, the production is earmarked by bold and occasionally random creative decisions, and while not all of them work, you’ve got to respect the confidence with which they’re executed.
In this article:King's Head Theatre, Lionel Bart, Musical Theatre, Quasimodo, Robert Chevara, Steven Webb, The King's Head Theatre, Zoe George