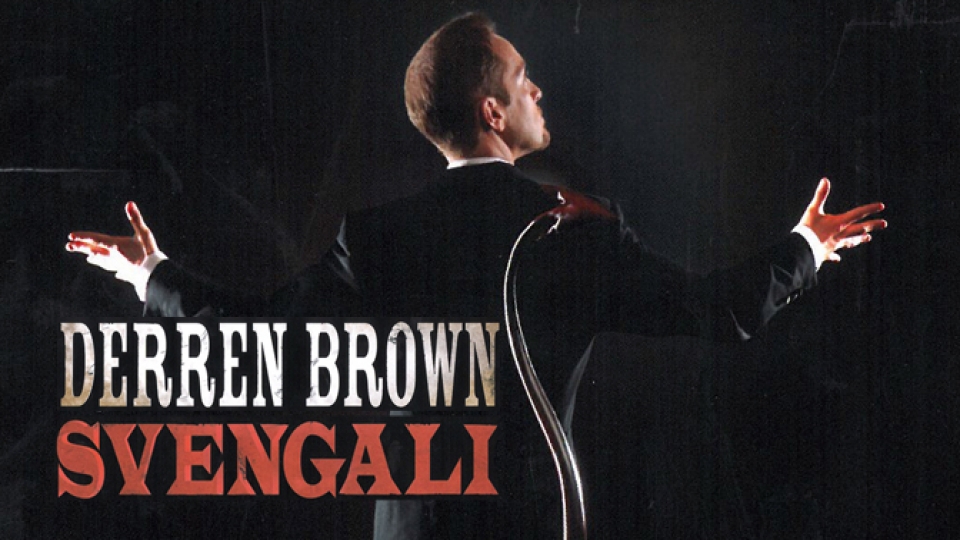 Winner of the 2012 Olivier award for Best Entertainment show, Derren Brown returns to the stage to present an utterly magical show. The master persuader and entertainer extracts confessions from the audience, paints one of his extraordinary portraits and has an audience member become possessed by a two hundred year old automaton.

Svengali is the fifth live tour show Derren Brown has produced; it ran for almost 18 months throughout the UK and also managed two residencies in London’s West End. It’s clear to see that Derren’s wondrous illusions (and other such things) continue to grow via each new show that he tours with. It’s an outstanding feat in itself to see one man hold the entire stage and the audience for over two hours of constant mind-boggling merriment. There are not many people who work in entertainment now that could do that nearly every night, yet Brown continues to lead the way in showmanship.

The title ‘Svengali’ means a person who, sometimes with evil intent, controls another person by persuasion or deceit. It is also a fictional Hypnotist character in the 1894 novel Trilby. These two points perfectly encapsulate what Derren puts on show here, it’s almost as if the viewer is hypnotised and cannot turn away. Yet this is more down to his impressive tricks and tales.

It all kicks off with Derren making a joke about his shoes and then getting the audience to guess which box his shoe is put in. Followed up by getting a lady up from the audience and extracting a secret confession from her, whilst it all seems very light hearted this is where we first see Brown really become focussed – almost as if he is reading her mind. Another audience member is pulled on stage, but now has a bag over his head, as Derren talks to him about thinking of a famous person he begins painting a picture in full view of the audience. Of course, Derren guesses right, but it’s more the reveal of the painting that sets gasps first off. Brown has a very unique painting style, but he still manages to make it looks amazing and the type of art work you would want in your house.

As the show progresses the tricks get bigger and bigger, and result in an excellent final segment that had everyone scratching their head as to how he does what he does. The constant question will be “How does he do it?” but we will never know (and probably not want to).

What makes Brown stand out as a performer more than just a magician is his comedic timing. There are several times in the show where it feels like we are watching stand-up comedy rather than an evening of wonders. He doesn’t hold back and constantly pokes fun at himself as well, it’s pleasing to see someone of his stature doesn’t mind doing these jokes or taking them from the audience. It feels like he relishes these bits.

Derren Brown’s Svengali is another classic case of how great a showman Brown has become. No longer is it mind reading or card games, it’s become a whole ensemble of craziness that never tires of producing more shock & awe-struck moments.

Advertisement. Scroll to continue reading.
In this article:Derren Brown, Svengali