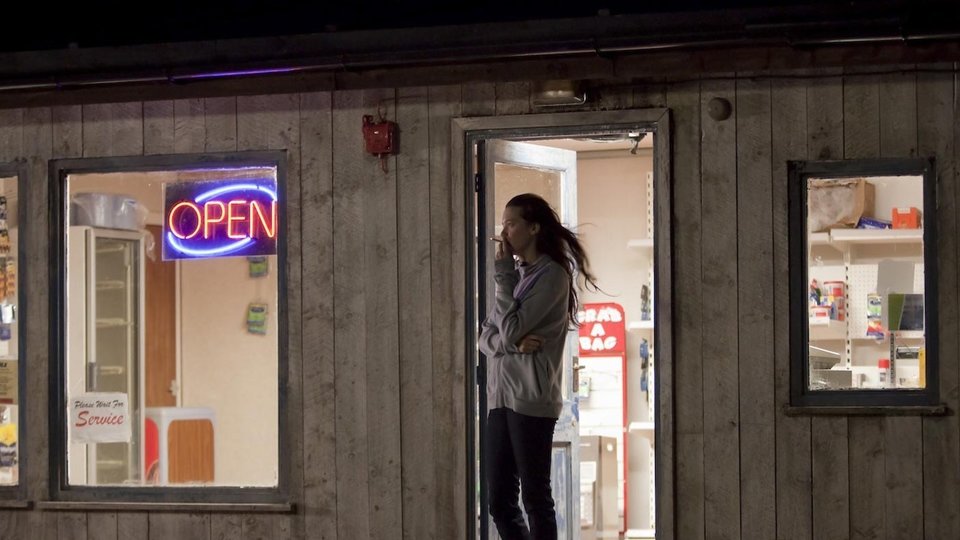 Shell first wowed critics at last year’s London Film Festival and now it’s finally getting a theatrical release in the UK. This is British filmmaking at its absolute best, with a strong narrative and visual style coupled with a simply mesmerising and powerful lead turn from Chloe Pirrie as Shell.

Chloe Pirrie is sensational in this well written and thoughtfully constructed portrait of a young girl struggling with her place in life. Pirrie handles the themes of the story with a maturity far beyond her years and hands in a truly breathtaking performance that will stay with you.

Her father is played brilliantly by Joseph Mawle, who gives a tough character plenty of layers to explore, even if he barely speaks. It’s a powerful role that’s expertly handled. He shares a good chemistry with Pirrie and the two make Shell a worthwhile endeavour thanks to their dedication to their respective roles.

The central relationship between Shell and her father is handled extremely delicately and gives the audience an excellent masterclass in restrained emotion. This is a relationship built on broken dreams, ambitions that will never be acted on and dark desires that shatter the very fabric of their tiny world. You may figure out where the film is heading but that doesn’t stop any of it being so emotionally impactful.

The uneasy relationships Shell shares with her patrons and random strangers are fascinatingly dissected in the film too. Social convention, the class system and general human interaction are intricately woven to form scenes with so much more going on than meets the eye.

When the two strangers arrive at the petrol station after needing help from Shell and her father, their exchanges are brilliantly handled – from the quiet malaise of a woman who is clearly in a loveless marriage through to the cautious exuberance of Shell’s line of questioning.  And when a lonely, divorced man chats with Shell on route to seeing his kids, you can almost feel his pent up yearning towards the only girl who seems to take the time to know him – even if it’s just through banal small-talk.

The films masterstroke comes from its location shots. This isolated rest-stop in the middle of nowhere is given an almost mystic feel by writer/director Scott Graham. We feel like we are in limbo along with Shell. The bleak but hypnotic landscapes surrounding the petrol standing mirror Shell’s struggles for a way out of this life and the fears that prevent her from making that step.

Heartfelt, restrained and quietly devastating, Shell is a must-see movie. With raw emotion and amazing lead performances, especially from Chloe Pirrie, Shell comes out as a depressing but captivating watch that will hold your attention throughout.

Jason Palmerhttp://www.entertainment-focus.com
Jason is a film contributor for Entertainment Focus (EF) bringing you the latest news and reviews from the movie world.
Previous article
Trance stars shine at London premiere
Next article
New trailer debuts for Star Trek Into Darkness