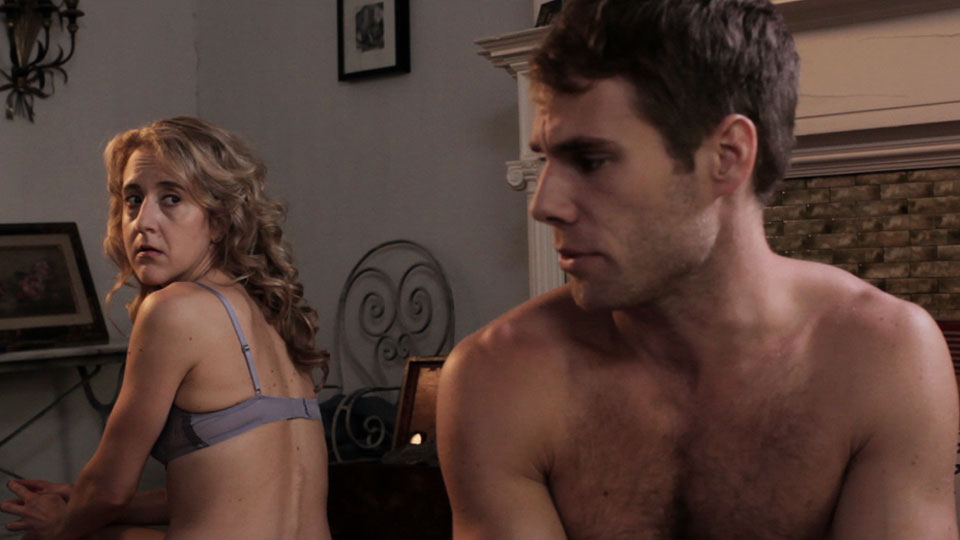 Jenn (Jenn Harris) and Matt (Matthew Wilkas) have been best friends since college. Both in their thirties and single, the friends don’t have a great deal but each other. Jenn spends her days teaching hot yoga whilst Matt work’s in a comic book store and can’t get over his ex-boyfriend. One day the two friends discuss fulfilling their promise to one another about having a baby together if they are single without any real prospects of a relationship. Jenn insists on getting pregnant the old-fashioned way so the two friends start to regularly have sex. Unfortunately things start to get complicated when each of their love lives starts to take off and unexpected hurdles threaten to ruin their friendship forever.

Gayby is the feature debut of writer/director/actor Jonathan Lisecki. The film is a feature length version of Lisecki’s 2010 short of the same name and features the same two leading actors.

At heart the movie is an exploration of friendship and the trials and tribulations that come with it. Jenn and Matt don’t really understand the significance of their once innocent promise to each other. At its basic it seems like a fairly easy and uncomplicated thing; the two want a baby so what better way than to have one with your best friend? Of course it’s never that simple as feelings, hopes, desires and obstacles inevitably get in the way. For Jenn an unexpected fling causes potentially irreversible problems whilst Matt bumps into hunky single dad Scott (Mike Doyle) and begins to fall in love.

Lisecki manages to balance the drama and comedy elements of the film well. He never lets the film dwindle into sentimentality keeping the story believable and the behaviour of his characters realistic. He himself appears as Matt’s friend Nelson and provides much of the humour stealing scenes left, right and centre. Anna Margaret Hollyman brings plenty of laughs too as Jenn’s blunt but honest sister Kelly.

The performances of Jenn Harris and Matthew Wilkas are the real draw for this movie. They have a wonderful chemistry onscreen and you can’t help but squirm at the idea of the two best friends having sex. The scene where they have sex for the first time is cringe-worthy as Jenn insists on having intercourse whereas Matt thought they would be receiving the help of doctors to avoid that. Harris plays Jenn in a neurotic but relatable way whilst Wilkas’ doe-eyed Matt is emotional and sensitive. The scenes with the two characters together are the movie’s finest.

Gayby is a refreshing take on the romantic comedy drama genre and an example of how gay cinema can appeal to a mainstream audience. Lots of the conventions of a romantic comedy are in place but Lisecki takes his story into unexpected ground which is why we love Gayby so much. Prepare yourself for lots of laughs, a bit of emotion and some stellar acting.