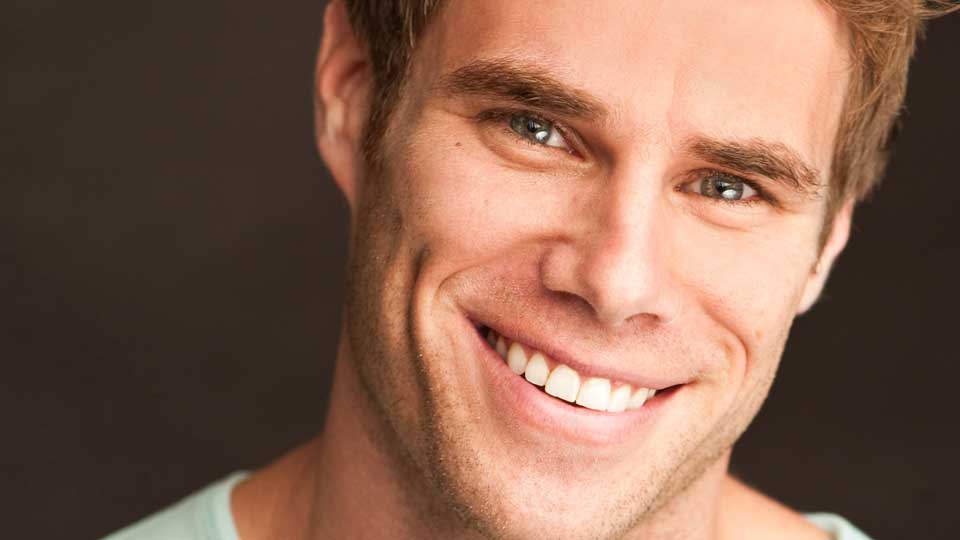 New York-based actor and writer Matthew Wilkas is a star on the rise that you should definitely keep your eye on in 2013.

He recently finished a year-long run on Broadway as Flash Thompson in musical Spider-man: Turn Off The Dark and he’s the male lead in hit new comedy Gayby by writer/director Jonathan Lisecki. In the movie Matt stars alongside his real-life best-friend Jenn Harris.

We called up Matt to chat about Spider-man, get the low-down on Gayby and find out what else he’s got planned for 2013.

I’m good. I’ve been up about three hours and I’ve had my coffee. I’ve just been catching up on emails. I left Spider-man in the middle of January and I’m going to be going to Los Angeles for a couple of months. I’ve just been working on the arrangements for that; getting my car and getting an apartment to stay in.

How did you get involved with ‘Spider-man: Turn Off The Dark’?

Have you enjoyed your time in the show?

I have. It’s been a lot of hard work. I learned so much doing it because I got to do things I’ve never done before like flying. I love the people that are involved with the production. They’ve become good friends and family to me in a lot of ways.

Has it inspired you to do more musical theatre in the future?

Yes! Absolutely. I wouldn’t turn something down immediately if it were something great. I definitely wouldn’t mind having a break from it for a while. This is going to make me sound lazy when I say this but it’s so much work. It’s the most hard work I’ve ever done as an actor in my life. Just physically and stamina-wise it requires so much of your time. The ability to keep it fresh eight shows a week for a year just takes a lot.

We can imagine it must be pretty gruelling. Let’s talk about ‘Gayby’ which is coming out on DVD here in the UK soon. Give us a little summary of what the film’s about.

It’s about a gay man and a straight woman who have been best friends since college. They decide to have a baby together. They go about it the old-fashioned way and have sex with each other which is where the comedy begins in the film. It’s about the trials and tribulations of trying to have a child.

It’s based on a short film of the same name that you also starred. What was behind writer/director Jonathan Lisecki’s decision to turn it into a feature film?

Jonathan had always intended it to be a short. He actually intended it to be something he was going to act in and he was supposed to be playing my character. He was going to do it with his own best girl friend in life but she wasn’t available so he decided to do it for me and Jenn because we’re real-life best-friends. It did pretty well on the festival circuit as a short and started at Slamdance. It travelled the world. I think it played over 100 film festivals. It garnered a lot of interest from people, particularly two producers Anne Hubbell and Amy Hobby. They courted Jonathan and asked for him to write a feature script. He said it was really easy to do because the story lent itself to a longer version. He was able to write the script in two weeks and then we shot it three months after it was written. It was edited and ready to play at SXSW maybe six months after that. It was crazy how quickly it all happened.

What would you say was the biggest challenge for you in your role?

I would say the challenge was also the same thing that was really fantastic about the film. I was essentially working with all of my friends. So many of my friends were involved with the project and I think that presents challenges as well as benefits. It’s hard to work with your friends because it’s tricky to navigate the business relationship and the actual friendship while on set. It’s also great because there’s a real shorthand that you have with your friends where you can cut to the chase and a comfort level that you don’t usually have with actors, especially if you’re doing intimate sex scenes. The chemistry that Jenn and I naturally have with each other makes it easy. It can be tricky though as these were people I am so close with that it’s easy to be too honest or too cruel in the moment with the people. It’s interesting.

You had to film quite a few intimate scenes with Jenn in the film. Was that quite a weird experience for you?

It was weird but I think that we both really used the weirdness to the benefit of the scenes because it had to be weird. The awkwardness is really palpable and we had such an understanding of how awkward that situation would be in real life that it made it easy to play.

The title ‘Gayby’ gives you the impression that the film is going to be farcical and possibly even slapstick. We were glad to see it’s actually a cute, sensitive and realistic film. What kind of reaction has it had?

I think people have the same reaction as you do. They are surprised how sensitive it is. It’s not serious, it is a funny film but it does have layer of seriousness underneath it. I think that makes it all the better. It’s my favourite kind of film; one that is funny and entertaining but that has a heart to it.

What was your favourite memory from working on the film?

I think the first sex scene that Jenn and I have together in the film was my favourite thing to film and my favourite thing to watch. I love the opening credits too when they show the photographs of Jenn and I over the years. Those are real photographs from our lives. Whenever I see that in the film it’s really rewarding to see our friendship immortalised in this film. It’s nice to know that years from now we can look back at this film and in a way see a recording of our friendship.

What kind of reaction have you had from your gay fans?

I don’t really have much of an idea of who my fans are. Once in a while I’ll get a tweet or a message on Facebook that people really liked it. It’s all been positive that’s for sure. I’ve not heard any negative things directly.

You’re active on social media. Have you encountered anything weird on those channels?

It’s funny. Randy Harrison (Queer as Folk US) has a very small cameo in the film and he’s a very good friend of mine and Jenn’s. Jonathan Lisecki knows Randy too. Randy was only available for filming for one day and Jonathan wanted to give him a larger part but the timeframe didn’t allow for it. Jonathan suggested he do a cameo moment so he played a waiter in a scene. He has a very, very strong fanbase. Almost like a frighteningly large amount of people that are obsessed with him (laughs). By default they have all started to follow me on Twitter and Facebook. His moment is so minute in the film but I get so many questions from people asking what it was like to work with him, how much of the film he’s in and a lot of fan obsessed tweets and mail to me about Randy Harrison.

Yeah isn’t that funny? I have gotten that for at least 10 years. Before he was even a famous film and TV actor and he was in the theatre world people were telling me I looked like him and I didn’t know who he was. I thought maybe I would get to play his brother or something on Dexter one day (laughs) but then I started watching the show and they had cast his brother and killed him off so that’s not going to happen (laughs!).

You should pitch it….

(laughs) I should! Maybe it could go into the future and I could  play his son (laughs).

You mentioned earlier that you’re heading to L.A. to work on some other projects. Is there anything you can tell us about those?

It’s not a specific project. I’m going to be in L.A. for pilot season which is January to mid-March. I made my schedule free to be there for that. As for other projects I can’t give any details on anything right now but there’s little things in the works. I happen to be a writer too and I write plays rather than screenplays. Maybe someday I will write screenplays too. I’ll spend a lot of my free time in L.A. doing that and hopefully taking an improve comedy class at The Groundlings or something like that.

See you have the perfect opportunity don’t you? If you’re writing plays you should maybe start writing ‘Dexter: The Musical’ and cast yourself in the lead role…

‘Gayby’ is available now on DVD through Peccadillo Pictures.

Advertisement. Scroll to continue reading.
In this article:Gayby, Matthew Wilkas