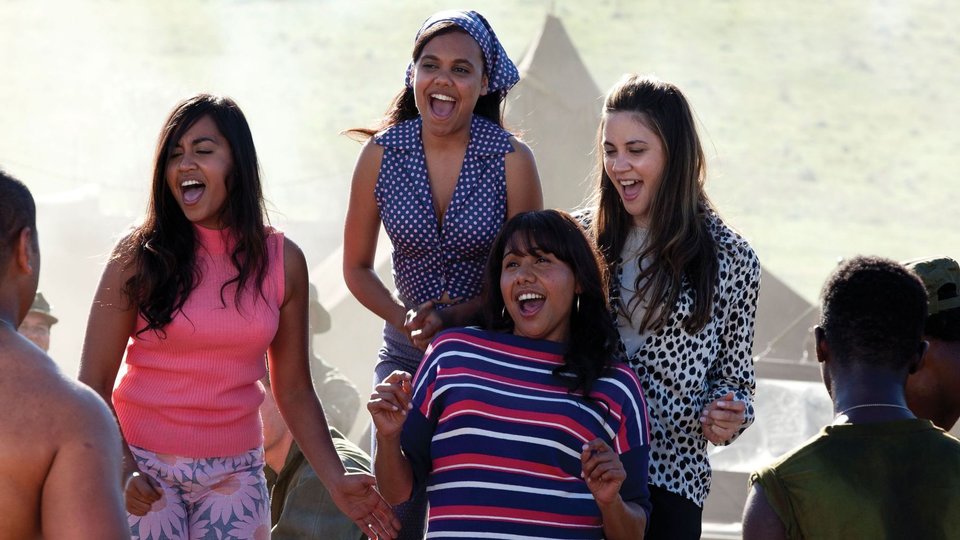 It’s 1968 and a group of three Aboriginal girls lead a quiet family life whilst dreaming of success onstage as a singing group. They stumble upon Dave (Chris O’Dowd – Bridesmaids), a musician who reluctantly agrees that they have raw talent and can play to packed audiences in Vietnam. Renamed The Sapphires, the girls get Dave onboard as their manager, seek out an estranged family friend to make them a quartet and hit the road seeking fame and fortune. However they find more than they bargained for once they enter the war zone.

The Sapphires evokes strong comparison to films like The Commitments. With an infectious storyline and characters you care about, The Sapphires is a big success and will entertain from start to finish.

The cast are all largely unknown. Jessica Mauboy leads the line very well as the feisty young singer who fronts the quartet. Deborah Mailman is very good as the soul of the girls and their unofficial spokesperson. Miranda Tapsell entertains as a lovelorn but eager young woman who finds love on-route whilst the film’s most interesting story thread finds Shari Sebbens excelling as a young woman who has had to live with a denied past that alienated her from her true heritage.

The girls are all accomplished but who really makes this film tick is an energetic Chris O’Dowd who steals all of his scenes as the hilarious Dave. It’s his natural comic timing, charming persona and clever handling of the drama that makes The Sapphires work so fluidly. He also proves to be quite the love interest too. The Bridesmaids star has really established himself as a versatile leading man and as fans of The IT Crowd we are delighted for him and his continued success.

The film uses some beautiful settings throughout, even when they enter Vietnam and the girls find themselves in some tricky situations. The attack on the village is a particular high point as the exuberance of the concert is enveloped by a scathing attack that will leave more than a few audience members with teary eyes.

The Sapphires is a highly enjoyable comedy that gets the balance of humour and drama just right. With a collective cast all working hard, a killer soundtrack and the accomplished hand of Chris O ‘Dowd guiding them through, The Sapphires is one of the better comedy/dramas you’ll see this year.