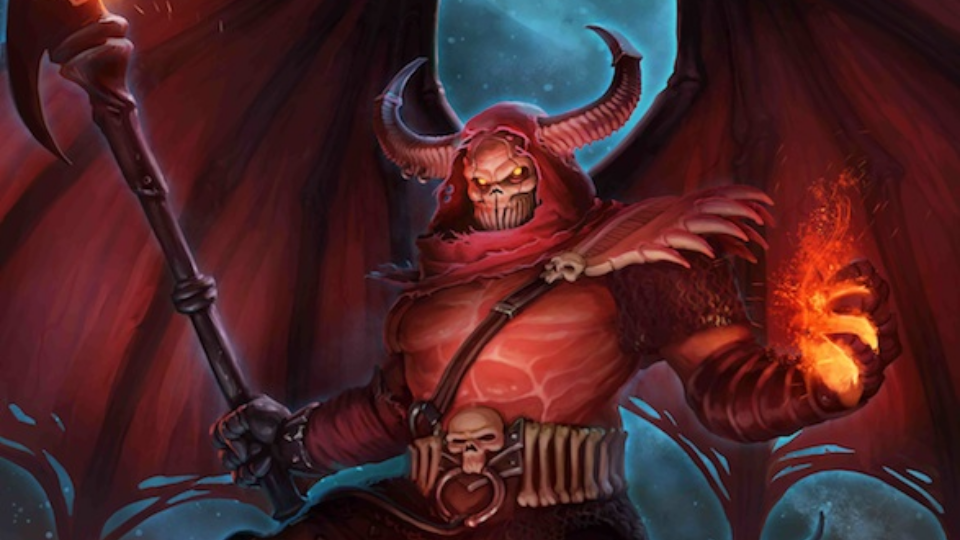 Impire is developed by Cyanide Montreal and published by Paradox Interactive. The game is a real-time strategy game that is most similar to the Dungeon Keeper. Don’t get too excited just yet though because Impire sadly doesn’t come close to the Bullfrog classic.

You play the role of the main character in the game, a mighty demon named Báal-Abaddon. You’ve been involuntarily summoned from the depths of the Bottomless Pit to the world of Ardania by a rather useless sorcerer called Oscar van Fairweather. He wants to use you to help spread evil so he can take over Ardania. To make matters worse Fairweather has managed to screw up the summoning which has replaced your mighty demon form with that of a tiny imp with a squeaky voice. As you progress through the game you can rectify this and gradually grow back into your former self.

As you can probably already guess this is a game with a sense of humour and it doesn’t take itself too seriously. While there are some genuinely funny moments at times the game seems to be trying a little too hard to make you chuckle. The story is played out via in-game cutscenes and plenty of decent voiceover work which is nicely done. One small annoyance here is that there is no attempt at lip synching and the characters don’t even move their mouths while speaking.

After setting the scene the game throws you into a fairly comprehensive tutorial. Here you’ll learn the basics of how to play and the game mostly holds your hand. Simple objectives must be completed in order to progress and for the most part the game does a good job at helping you learn. We did spot the occasional spelling mistake and ran into a few issues where it wasn’t immediately clear what to do next.

Each level begins with information on what you are trying to achieve and then you must control Báal while you setup your dungeon. These are created in full 3D and you can tilt and rotate your view of the dungeon. It’s also possible to zoom right out and get a proper map-style top-down view of the dungeon. A certain amount of each dungeon is created for you and there is little freedom in how you build. You have some control over the creation of hallways and rooms but as the location of many of the rooms is predefined the game is spoilt somewhat. A really nice feature when viewing the dungeon from above is that you can hover your mouse over any room or squad icon to see a small viewport of what is going on at that location.

Báal is controlled using a combination of mouse and keyboard inputs. Your first steps are usually to summon some worker imps to help you out and these can be tasked with repairing broken rooms, tunnelling hallways or put to work in a certain room. Firstly you need a mushroom chamber and store room. These are followed by a kitchen to feed your monsters and a nursery where you can grow new ones. Later in the game new types of rooms become available to you such as a prison room, brewery, training room, treasure and torture rooms. Unfortunately these rooms always look the same and you have no control over how many entrances they have or how big each room is.

Once your dungeon starts to take shape you need to focus on building an army. There’s a whole variety of monsters to create from melee berserker imps, ranged scouts, overlords, priests and a whole lot more. Your monsters can be grouped together into squads of four and you can mix different types of unit. It’s worth experimenting here are different combinations of units benefit each other in different ways. Your monsters can be set to defend, patrol or just follow Báal around.

Each monster class has its own unique abilities and it’s essential to learn how each works to get the best out of them. Your monsters earn XP through combat and training which allows them to gain levels. Eventually they also get access to better armour and weapons. If a monster gets hungry then it loses its aggression which directly affects their combat performance. To prevent this you need to periodically ensure you send them to the kitchen in order to eat which gets annoying.

Squads of monsters can also be sent outside of your dungeon on raids. This sounds like an exciting feature and the name conjures up images of MMO’s like World of Warcraft. It’s a big disappointment though as what it means is you can view the world map and send a group of monsters off to raid a location. They simply go off and die or come back with a certain amount of treasure or materials. If you want you can click their destination to watch them arrive and fight. This is no more exciting that waiting to see who wins and the only interaction you have is casting a lightning spell when mana permits.

Between dungeon building, demon management and raids you also have to keep an eye out for heroes attacking your dungeon. They do this by walking in the front door or dropping ladders into the dungeon. If you spot the ladders quick enough you can destroy them. Downed foes can be harvested for materials, sent to prison or tortured depending on your preference.

Heroes tend to appear just when you’re busy with something else. To help you should ensure you have monsters patrolling and traps set. The most effective way of getting rid of them is to deal with them yourself. This is almost too easy thanks to a powerful teleport spell that can instantly bring Báal and your squads or monsters to any part of the dungeon you have visited. The mana cost of this is so low that you can pretty much use it whenever you like.

After a little practice the game is easy to control and the radial interfaces that appear when pressing buttons work well. Unfortunately though many parts of the game feel like they need attention and some are too restrictive which spoils the fun. The biggest issue with Impire is that after a while it becomes very repetitive. You’ll spend time creating a dungeon from scratch, battling heroes and looking after your monsters.

In addition to the single-player campaign Impire also has some multiplayer features. These are currently still in beta and make it possible for up to four players to compete against each other in a variety of game modes.

Impire impresses initially but fails to keep you interested for more than a handful of hours. More variety in the missions, interactive raids and freedom to build each dungeon your own way would have really helped. RTS fans should consider giving this a chance but if you’re expecting Dungeon Keeper 3 then you will probably find yourself disappointed.