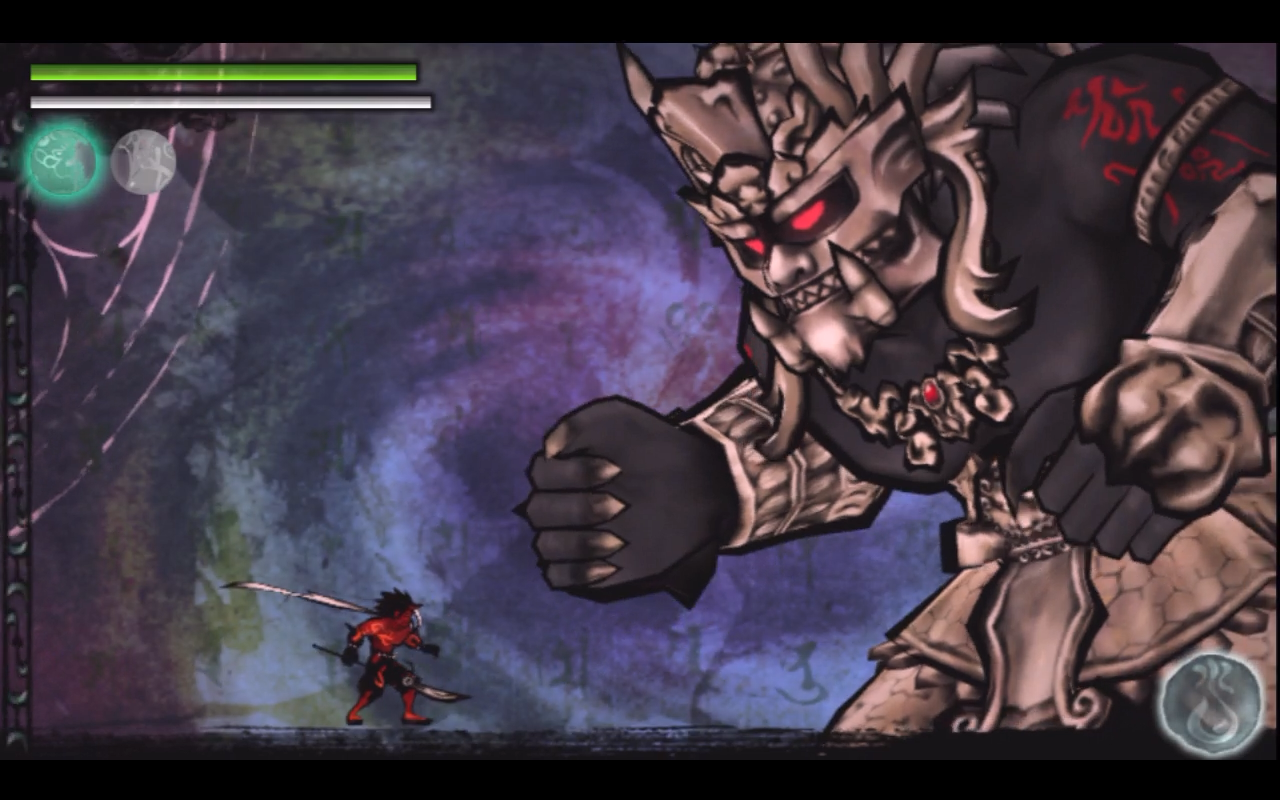 Sumioni: Demon Arts is developed by Acquire and has been brought to the West by publisher XSEED Games. In the game you play the role of a lazy Inkdemon named Agura who is summoned to help rid the world of an evil dictator. The game has a very unique look as it is presented using a sumi-e painting style which is a type of East Asian brush painting using ink.

Agura comes equipped with a sword and is very agile. He can run and jump around the environment with ease. A double tap of the left stick makes him dash while holding it during a dash sends him into a dance strike causing him to rush forward while swiping his blade. Pushing up during a dance attack makes him perform a windmill attack while tapping down twice mid-air make him slam downwards.

Agura also has a variety of ink abilities which can be performed by using the touchscreen. Tapping on the screen causes a sword attack but by dragging your finger you can paint platforms for Agura to use. These can be used to bypass obstacles or for better positioning to attack. Standing on the platforms also boosts your attack power but they fade over time and you can only have three platforms at any one time. If you take damage or fall to the ground then your boost is reset.

In addition to your platform brush you can swap to a water brush that can be used to erase platforms and certain enemy projectiles. Used on flame it will turn to steam which causes enemies to become confused and attack each other. On lightning it produces shockwaves which slow enemies.

Pressing the left shoulder button swaps to the arts screen. Here you can call upon flame or lightning to aid you. Drawing lines creates walls of fire which can burn enemies or structures as well as block some projectiles. Holding on one spot spawns a thundercloud which you can grow if you have enough ink. The arts screen also allows you to summon one of two Inkgods to aid you by tracing a symbol.

To replenish your ink gauge you need to constantly make use of the rear touch panel. Rubbing it furiously with your fingers while playing is known as Ink Padding and this will gradually give you ink back. You need to do this constantly to ensure you have enough ink available.

Upon completing a stage your clear time and damage are ranked to give you a star rating. There’s a maxiumum of three stars on offer and how you rank determines your path through the branching storyline of the game. There’s no choice about which branch you take so seeing each requires many playthroughs and different types of performance.

Sumioni: Demon Arts looks lovely and plays really well but the way the branching story is handled doesn’t quite work. It does add to the replayability but the length of the game is relatively short. If you enjoy action or platform games then consider checking this out.