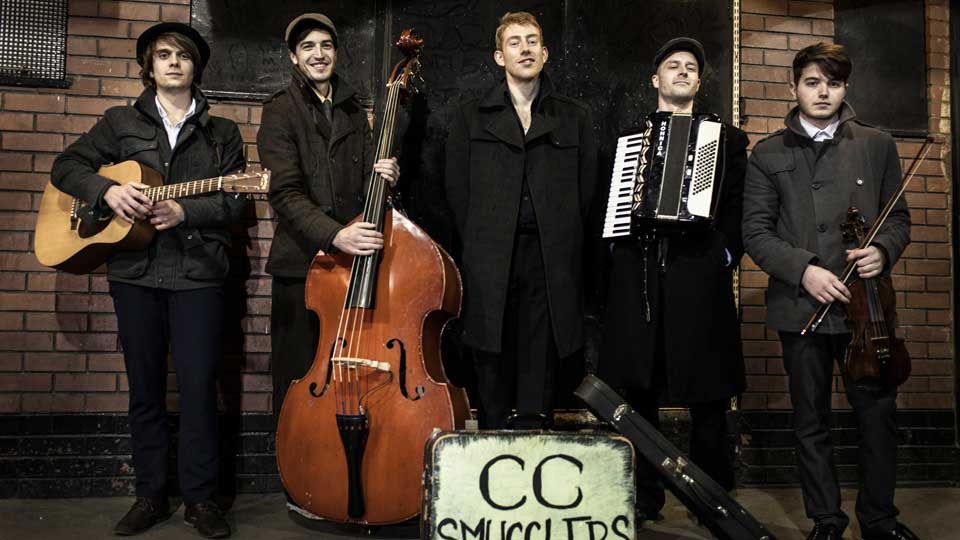 Who are the CC Smugglers? Here’s a little introduction for you, they are an Americana-folk-blues-country band from right here in the UK, from Bedfordshire to be precise! They are a band who are turning heads and building a significant fan base wherever they go. They have secured a reputation as winning over new fans by busking in a number of different live settings. The CC Smugglers have been braving the recent freezing weather, by travelling the length and breath of the UK and Ireland in a former postal van, which not only gets them from gig to gig, but which has also their home for the duration of their tireless campaign to get media attention and to put themselves forward to the public’s attention!

They recently followed the band Old Crow Medicine Show around, busking outside the main entrances of each of their shows as the fans arrive, extending a tradition that captures the spirit of that evening, as the Old Crow Medicine Show themselves made their name by busking 15 years ago in the streets of Boone, in the Blue Ridge Mountains of North Carolina. CC Smugglers are no strangers to busking outside the gigs of their musical heroes. It’s this kind of good-humoured, guerrilla self-marketing that has earned them the respect and praise of artists like Jools Holland and Seasick Steve, as well as Radio 1’s Fearne Cotton.

The CC Smugglers first few tracks are littered with a plethora of different instruments including the banjo, double bass, dobro, rhythm guitar and harmonica, ukulele and drums, we like it! They open up their album with a highly energised song called A Little Sleasy. This track excites us and makes us smile. After reading up about the band, we were pleased to listen to the opener and to note that their enthusiasm in driving the band forward, matches their talent and this is very exciting stuff.

Their second song is called Mother’s Ruin – an ode to their childhood times, the vocals on this song are particularly great and the song has a strong country vibe to it. Reuben’s Train is an uplifting number and it’s a very fast song that flies by, the lovely backing vocals add another dimension to the track and adds depth and warmth. Stagecoach and Travelling Man are the most moody, drawling numbers on this album and we like these songs a lot!

The CC Smugglers are clearly in this for the long-haul and their drive to be noticed is extremely admirable. “We say if you think big, most of the time you will achieve big results”, states Richie. Overall, the whole feel of this album is excellent musicianship and well-crafted songs. With all their hard work that they have given into grafting and making themselves noticed, it’s only a matter of time before they embark on great success and they truly deserve it. This album is excellently made and we thoroughly enjoyed it and we are sure that the music loving public will also love it.