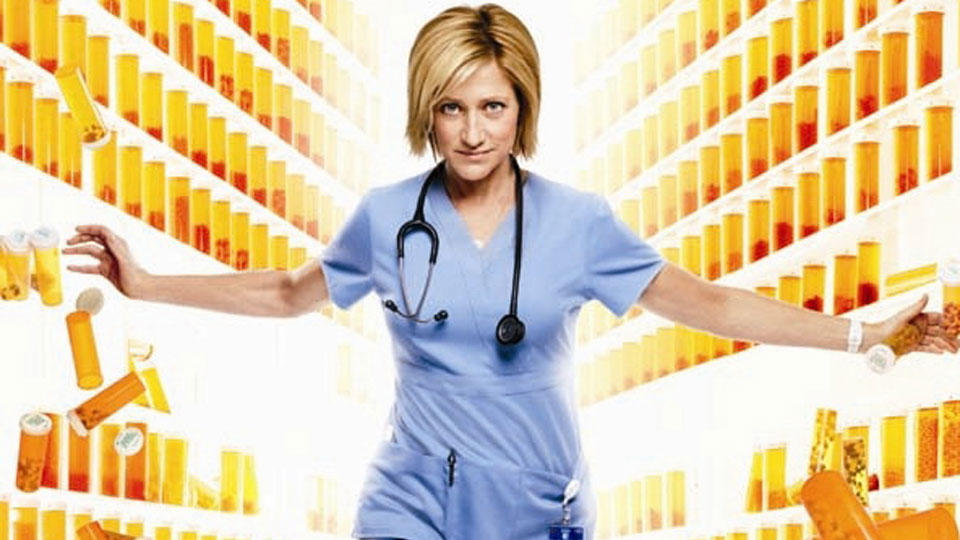 Jackie Peyton (Edie Falco) is back for a fourth season of hit Showtime series Nurse Jackie which is being released on DVD in the UK this week. In the US the show has developed a small but loyal audience whilst in the UK the show is very much a hidden gem. This is thanks in part to the BBC moving the show around the schedules for its first two seasons making it near impossible for fans to know when to tune in. Now the show airs on Sky Atlantic and has been given more care and attention in regards to its scheduling.

The 10 episodes of the season pick up with Jackie finally admitting she needs to go to rehab after a sudden death occurs in her home. At the end of the third season Jackie’s world was beginning to fall down around her after her husband Kevin (Dominic Fumusa) admitted cheating on her and discovered her drug addiction. Whilst away in rehab Jackie’s reputation at the hospital she works comes under scrutiny when Dr Mike Cruz (Bobby Cannavale) replaces hospital administrator Gloria Akalitus (Anna Deavere Smith) during a takeover.

Nurse Jackie: Season Four explores Jackie’s attempts to stay clean and to rebuild her life and career. It also sees the tables turned on the once untouchable Jackie as her behaviour and drug addiction catches up with her. Whilst Akalitus has turned a blind eye to Jackie’s indiscretions, Cruz is unwilling to do that determined to get her to tow the line. As Jackie deals with her demons in rehab she meets teenager Charlie (Jake Cannavale) who she forms a close bond with and is also struggling with addiction. Over the course of the season Kevin’s anger towards Jackie increases as he learns more about her addiction and her relationship with colleague Eddie (Paul Schulze).

Elsewhere in the season Dr O’Hara (Eve Best) surprises everyone with the announcement that she’s pregnant, Zoey (Merritt Wever) begins to question her relationship with Lenny (Lenny Jacobson) and Coop (Peter Facinelli) embarks on a whirlwind romance.

At the heart of Nurse Jackie has always been, and always will be, the performance of Edie Falco. Completely reinventing herself after her role in The Sopranos, she plays Jackie Peyton with believability. Despite the flaws of the character Falco plays her in such a way that you can’t help but sympathise with her. At no point do you feel she’s deserved the things that happen to her. Falco is a superb actress and her performance in this show is amongst her best work. We also love Eve Best as the flighty but loveable Dr O’Hara. Her relationship with Jackie has wavered up to this point but the show’s best scenes are when the two are interacting.

Bobby Cannavale makes a great addition to the cast as new boss Mike Cruz. At the start of the series he’s completely unlikeable but as it progresses the character is fleshed out and you begin to understand why he is the way he is. He’s a worthy adversary for Jackie and his path to running the department the hospital the way he wants is of course not very smooth.

Extras on the discs include interviews with some of the show’s supporting cast (Lenny Jacobson, Arjun Gupta and Stephen Wallem) and a featurette focusing on the characters of Mike Cruz and Charlie.

Nurse Jackie: Season Four is a strong season for the show and it does something different than the previous three seasons. Jackie really is fighting for her life this season and it makes for fantastic viewing. The comedy is served by the supporting characters but it’s Jackie’s story that will keep you hooked once again.