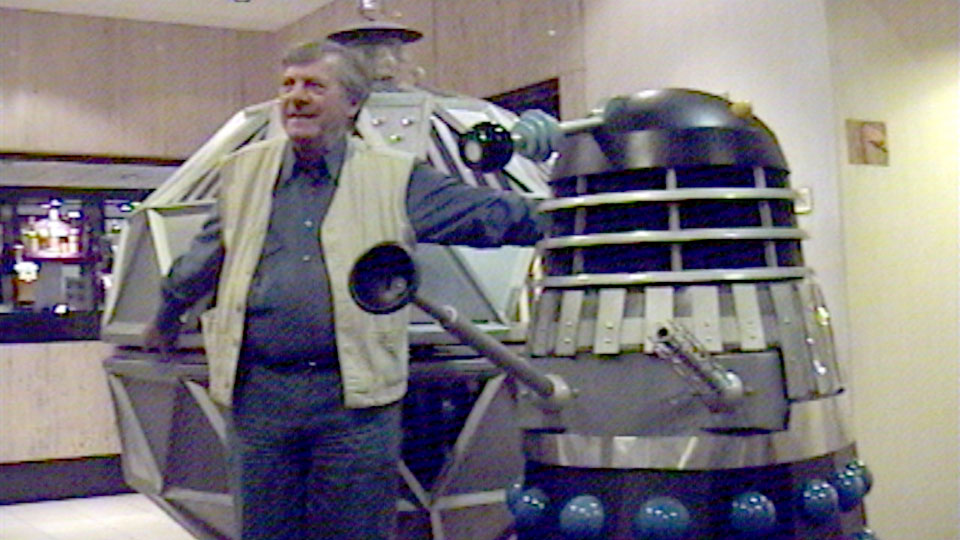 Raymond P. Cusick, the production designer responsible for the visual creation of the Daleks, has died aged 84.

A staff designer at BBC Television for over thirty years, Cusick originally began his career painting backdrops for stage productions. The relatively new medium of television in the 1950s provided career options with either the BBC or Granada, and he chose the former for its prestigious body of programming, even though it paid considerably less than its commercial competitor.

One of two production designers assigned to fledgling series Doctor Who, Cusick stepped in to replace Ridley Scott as designer of the second serial of the show’s season, The Mutants, in late 1963. Written by Terry Nation, the serial featured cyborg-like creatures called Daleks which were sustained in a travel machine. Given the task to create these vehicles on a modest budget, Cusick worked closely with Shawcraft Models in Uxbridge to create four fibreglass machines designed to be operated by actors.  Whilst the production team were impressed with Cusick’s work, nobody predicted the so-called Dalekmania which was to follow.

Terry Nation and the BBC prospered from the commercial success of the Daleks, yet Cusick as a staff designer retained no ownership over the Dalek product. Despite two feature movies in the 1960s and masses of merchandise, Cusick was given less than £200 as an ex-gratia payment for his work. An industry design award, however, recognised his technical achievement. For many, he will be regarded as the innovator behind an iconic piece of 1960s pop-art. Actor Terry Molloy, who played Dalek inventor Davros, remarked today: “Ray was the true creator of the Daleks!”

Cusick spoke of his enduring creations in a personal interview in 2002:

“It continues to surprise me that after all this time there is still such a strong interest in Doctor Who and especially my contribution. It is all very flattering. It has meant that much of what I did for the show from 1963 to 1966 is very sharp in my memory. But when it comes to other productions that I have worked on since, much more ambitious and prestigious productions, my memory is blank. I look at tapes of these shows now and I often have no recollection of ever designing some of the sets. It’s rather like looking at another designer’s work. When I look at the Dalek, I recognise every feature, every detail, which I strived to get through to the construction stage. They still follow me around and I’m proud of them, even if they were born out of the poverty of a tiny budget.  Still, it was all good fun – well most of the time – and judging by current BBC standards, the programmes were generally superior.”

In addition to several Doctor Who serials, Cusick was responsible for production design on Miss Marple, The Duchess of Duke Street, Rentaghost, When The Boat Comes In and The Pallisers. For a brief stint he also worked through the BBC director’s course at the beginning of the colour revolution, but soon returned to his passion in production design. Prior to retirement in the 1980s, he also contributed to Doctor Who – The Early Years, a book featuring much of his draftsmanship for the programme. In later life he was a regular contributor in documentaries and spoke at public events about his work, whilst perusing research in military history.

Raymond Cusick died peacefully after a short illness. He is survived by two daughters and seven grandchildren.