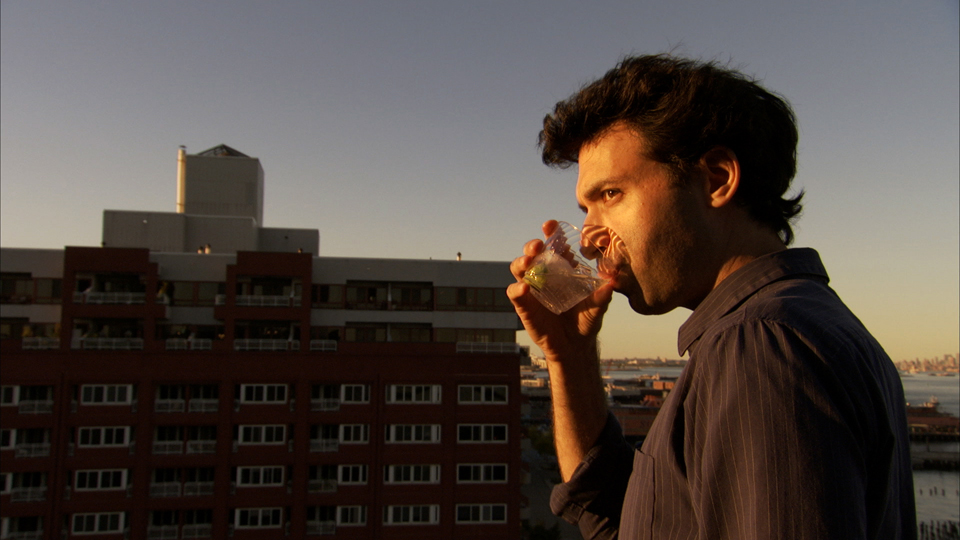 Sasha (Alex Karpovsky) has been in love with Mia (Marjan Neshat) and is put out when his best-friend Kyle (Gary Wilmes) starts to date her. When Kyle and Mia break-up the three friends don’t speak to one another for over a month until they are reunited at Sasha’s rooftop barbeque in Staten Island. Over the course of the evening the three become intertwined once again and things start to get a whole lot more complicated.

Almost in Love is a film that is split into two continuous 40 minute takes. The first takes place at Sasha’s barbeque whilst the second moves forward 18 months in time and sees the three friends reunited after the wedding of Sasha. Directed and written by Sam Neave, Almost in Love is an interesting production offering two snapshots into the lives of the three friends. Neave’s direction sees the focus drift in and out of conversations with the three leading characters sometimes removing the audio of them talking completely and replacing it with the chatter of our guests at the party.

There are some issues with Almost in Love. Whilst Neave’s idea is refreshing and his direction very modern, parts of the 80 minute film feel a bit saggy. He’s written the characters very realistically but unfortunately realism can hamper a movie. The conversations are a little dry and sometimes circle around mundane. We get that he’s trying to capture ‘real life’ but often you have to present a more polished version of ‘real life’ in order to engage the audience.

Alex Karpovsky is likely to be the biggest draw here since he found global stardom as part of the ensemble for Lena Dunham’s HBO series Girls. He has a loveable charm about him, something he uses for his character in Girls, and it’s near impossible not to root for him. He’s definitely the most sympathetic character in this movie and the one the audience wants to find a happy ending. Marjan Neshat and Gary Wilmes don’t get as much to work with as Karpovsky. Their characters left us a little cold and unengaged.

Almost in Love is an interesting watch but it could have done with an extra layer of polish. Due to the film being comprised of two 40 minute takes it’s hard for the audience to get a fully rounded picture of the three characters the film centres on. None of them are particularly fleshed out and some of the reveals about their history feels a little clumsy as it’s dealt with in the dialogue. We suggest you do give Almost in Love 80 minutes of your time as it is an intriguing watch but we couldn’t help feeling it could have done with a little more care and attention.

Almost in Love is currently showing at the reRun Theater in Brooklyn, New York until Thursday 21st February.