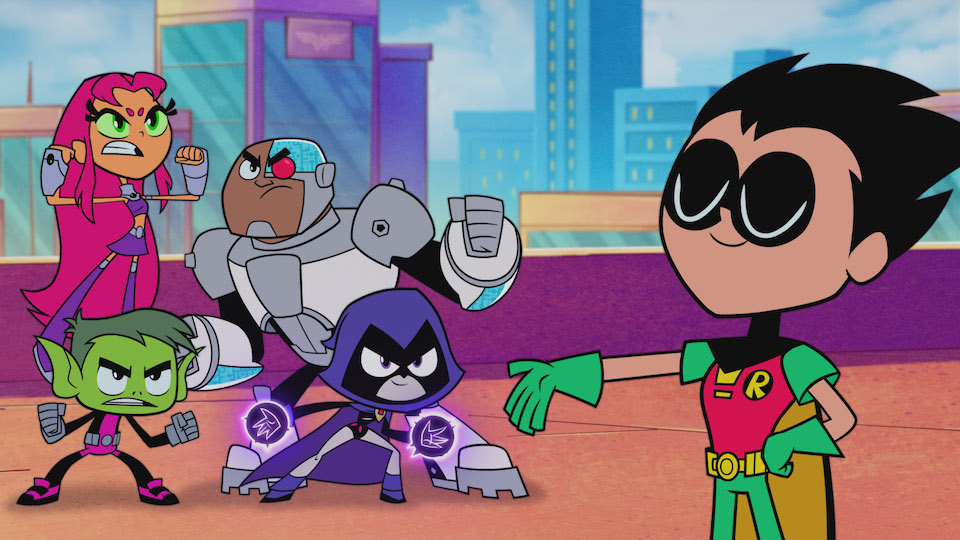 Teen Titans Go! To The Movies is a film I am delighted I didn’t pay money to see at the cinema. Whilst watching it for this review, I have had to pause it so many times because I couldn’t stop laughing. If I had been in the cinema I think I would have missed half of the film. Being largely unfamiliar with the Teen Titans – specifically this Cartoon Network iteration – I had no expectations of the film whatsoever, and ended up having an absolute blast.

The plot, which is genius and bonkers in equal measure, sees Robin and his fellow gang of DC sidekicks and poor relations (Cyborg, Beast Boy, Raven, and Starfire) wanting to be taken seriously enough to have their own movie. Because, let’s face it, every other superhero has a movie these days. But when supremo superhero filmmaker Jade Wilson (Kristen Bell) tells them they need an arch nemesis before they can have a movie, the Teen Titans set out to make Slade a.k.a Deathstroke (Will Arnett) the yin to their yang.

After the grungy darkness of the recent DCEU movies, Teen Titans is a pure explosion of fun, colour, and juvenile wackiness. It’s also a brilliantly irreverent takedown of the proliferation of superhero pop culture. The film takes aim at everyone and everything associated with comic book movies – from easy targets such as Batman v Superman (“wait, what’s your father’s name?) to super obscure references for the hardcore fans. But it’s important to note, that the intention throughout the film is to make you laugh, and whether or not they are taking the piss out of Marvel or DC, it is all done equally, and with genuine affection. Well, maybe not for Shia LaBoeuf.

But it truly is all about the laughs, and there are moments in Teen Titans Go! To The Movies that are still making me giggle days after seeing it. I haven’t yet mentioned that it’s also a musical, and has great little pop songs, including the fabulous Upbeat Inspirational Song About Life. The punch-line to this song is one of the afore mentioned moments where I had to pause and rewind. It is a tiny, brief moment of extremely dark comedy that left me absolutely helpless with laughter.

In another moment of truly inspirational comedy, the Teen Titans decide to get rid of the superhero competition, who are holding them back from achieving Hollywood stardom. They accomplish this by travelling back in time to prevent their origin stories from happening. It is one of my favourite scenes of the year. How they prevent Aquaman from becoming a hero had me howling. It is genius.

There’s genuinely nothing negative that can be said about this film. It is an utter joy from start to finish, gloriously skewering the epic pompousness of superhero cinema. The voice cast are all terrific, including Nicolas Cage (finally getting to play Superman), and a beautiful cameo from Stan Lee, which has been made all the more poignant since his recent passing.

There’s very little in the way of special features on the DVD, just a couple of short storyboard animatics. But don’t let that put you off. This is a cracking little film, and it will have you laughing from start to finish. Kids will love it. Fans of superhero movies will adore it. And comic book aficionados (who get all the nerdy references) will be in heaven.

TEEN TITANS GO! TO THE MOVIES arrives on DVD & Digital Download November 26th, and will be available on Blu-ray exclusively at HMV.

‘Renfield’: Nicolas Cage and Nicholas Hoult team up for new spin on Dracula

‘The People We Hate At The Wedding’: see Ben Platt and Kristen Bell in first images