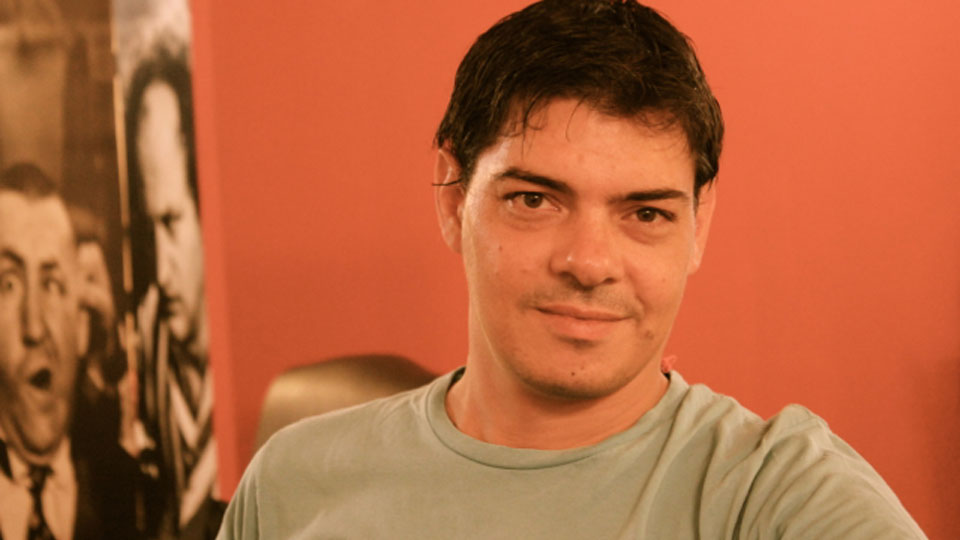 Marcelo Mónaco is a writer and director from Buenos Aires. Along with fellow film-maker Marco Berger, Marcelo has just released Sexual Tension: Volatile on DVD through TLA Releasing here in the UK.

Sexual Tension: Volatile is a collection of 6 short films exploring the sexual tension between men in different situations. Believe us when we say it gets you a little hot and steamy under the collar!

We caught up with Marcelo to find out all about the new release, discuss the upcoming female equivalent and chat about the hot guys he puts in his work.

Hi Marcelo. How are you today? Where does this Q&A find you?

I feel fantastic. This year TLA will release three movies that I have been involved in!

Your shorts collection Sexual Tension: Volatile has just been released on DVD in the UK. Tell us about it.

Volatile is a film with 6 short films or tales of different genders. 3 have been made by Marco Berger and the other ones by me. The cast is totally different for each tale and everything is linked by the concept of sexual tension. We wanted to go to that moment of attraction between 2 guys, where the things are still uncomfortable, new, with lots of electricity. Since that point we built different stories. We have romantic comedies, drama and very fun stories all in there! We are all very happy about the result. I hope the UK audience enjoy the stories as much as the people did in all the film festivals.

Where did the idea for the project come from? Were any of the stories based on real-life experiences?

I wanted to make a series of short films with a strong link in between and then I thought that the concept of sexual tension could be very strong to make something. When I introduced the idea to [TLA director] Derek Curl and Didier Costet, our producers and distributors they accepted it very quickly! Then we invited Marco to join us and we started work.

Each of the stories is well-crafted and intriguing. Which is your favourite one and why?

I like many of them. Almost all of them! My main one from Marco is the Cousin, for me it is a jewel. It has everything I want from a story: fantastic shoots, a great star with Javier De Pietro and, of course, lots of sexual tension. Marco is a genius making these kinds of intimate stories. From mine, I very much like The Other One, mainly because it was the hardest story. We needed to work very hard with the actors to make it real, sexy and fun. When we screened this and saw how the audience enjoyed it I was very happy.

What we loved about Sexual Tension: Volatile is that you get to see very different kinds of men experiencing same sex attraction with lots of sexual ambiguity. Was it your intention to leave the viewer to come to their own conclusions?

I guess ambiguity is around our life and sexuality all the time. Even if we have our sexual orientation decided, we have a strong influence from our environment. I guess that these kind of situations of sexual tension can happen to anyone in everywhere.

Tell us a bit about the casting process. You’ve got some seriously hot guys in front of the camera. How did you pick them?

All the cast are professional actors with lots of experience in cinema, TV and theatre here in Argentina. The casting was closed, we did not publish anything, just sent few emails with the casting to some friends and then that email began to travel to lots of actors. So we took 3 full days doing the casting with Marco (who is well known here in Argentina because of his films Absent and Plan B) Our idea always was to find good actors + sexy + chemistry. The first cast was bit different from the final one but after few chats with Marco, we decided to make some changes on the actors and stories. When we finished we felt very happy because we think that the casting was very well done. All the boys were enthusiastic, all the time.

On a lighter note how did you manage to concentrate with so many hot guys around you? We’re not sure we would have got any work done…

Well, it is difficult sometimes. There are moments when I want to stop everything and get into the set with the actors to kiss them, haha. But it could be a disaster for the film. Sexual Tension is everywhere, even at the casting and shooting.

We hear that your next release is the lesbian equivalent to Sexual Tension: Volatile. What can you tell us about that?

Yes, it is done. The title is Sexual Tension: Violetas (violets). The same format of Volatile but 6 stories for women. We have drama, romantic and very fun stories too. I guess TLA will release pretty soon!

How do you see the series progressing? Are you hoping to release more volumes this year?

I guess that this year we will release Volatile in many countries and then Violetas. After that we will see how it is going. What kind of future the series can have or not; I would like to make few more. I guess the franchise can have a future, there is too many stories to tell, not only gay or lesbian. We will wait for the audience, they will let us know what is next.

Right now I am editing my new feature SOLO (Alone). I did the filming in January 2013 and will be ready for April to begin the festivals. It is a film about a guy who meets another one by chance on the street, they like each other and then he invites him to his home. After the romantic chat and some sex, the invited does not want to leave the house and the romantic urban film becomes a suspense thriller. It is all about ‘You never know who you are inviting into your home’. I am absolutely thrilled with the film and can’t wait to show it!