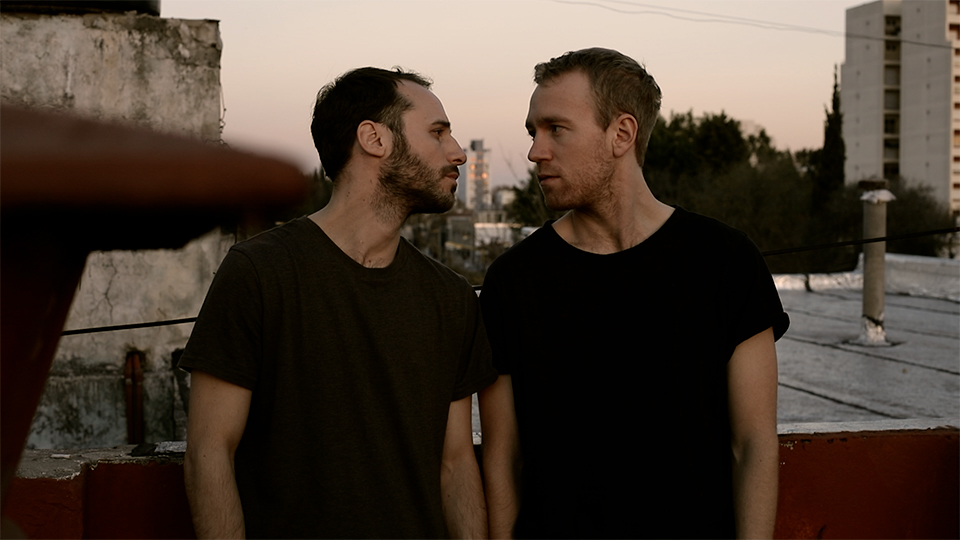 Gabriel (Gaston Re) moves in with his work colleague Juan (Alfonso Baron), leaving behind his daughter who lives with her grandparents while he earns money to support his family. Shy and introverted, Gabriel notices that Juan’s interest in him may be more than friendship. At first he tries to resist Juan’s glances and come ons but eventually he gives in and the two men embark on an unexpected secret relationship that challenges both of them.

The Blonde One is the latest film from writer/director Marco Berger (Plan B, Taekwondo) and it continues the film-makers exploration of relationships between men. Throughout his work Berger has created stories around ‘straight’ men crossing unexpected boundaries while using the camera as a voyeuristic lens for the viewer to watch things unfold. As with much of his work, The Blonde One is a slow burning story that features lots of lingering camera shots, underpinned by almost unbearable sexual tension.

Gabriel and Juan communicate their growing attraction to each other without words. They co-exist in the same living space but they rarely actually speak about anything of importance. Gabriel watches as Juan’s revolving bedroom door welcomes a string of women and feels confused when Juan clearly, and unashamedly, puts himself in situations where he’s half undressed or able to get close to him.

The moment that things turn from platonic is one of the strongest moments in the film and the actors’ chemistry sizzles. As both characters fixate on Gabriel’s bunny collection, their hands start exploring one another until passion takes over. The scene is full of tension and it’s handled beautifully, drawing out the sexual connection the two men have and taking its time to let it unfold.

From that point on Gabriel reluctantly allows himself to be dictated to by Juan who holds him close at night but pushes him away once they’ve had sex. He silently watches on as Juan continues to have a relationship with a girlfriend and accepts him back into his arms at night.

Berger captures the feeling of what it’s like to fall for someone who is seemingly unattainable and deeply conflicted. Rather than portray Juan as a closeted man who is battling his sexuality though, Berger enables Juan to be at peace with his attraction to men but chasing after a family of his own so he can live a ‘traditional’ life. Juan and Gabriel are surrounded by men who wouldn’t accept their relationship so being together in the open isn’t an option as Juan makes it clear he wants his life to stay the same without the complication of people looking at him differently due to his sexual preference.

Gaston Re and Alfonso Baron are wonderful in the film. Their chemistry is explosive and you can almost feel the heat radiating from the screen. Re is very good at pulling back and letting his eyes convey his emotion while Baron is bolshy and forceful, taking what his character wants, at the exact moment he wants it. The relationship between the two men feels so real and that allows you to buy into it so completely.

The Blonde One serves up a sucker punch at the end, which I won’t spoil, and I feel like there’s more to explore with these characters. While the story Berger wants to tell is completed by the end, there are some open-ended strands that could easily be continued in the future. The Blonde One captures the feeling of an all-consuming and passionate love, perfectly showing what happens when you continue with a situation there’s likely no future in. It’s touching, it’s heartbreaking and it’s beautiful to watch.

The Blonde One will open in Los Angeles for a weeklong run at the Laemmle Music Hall on 6th September.

In this article:Alfonso Baron, Gaston Re, Marco Berger, The Blonde One, TLA Releasing