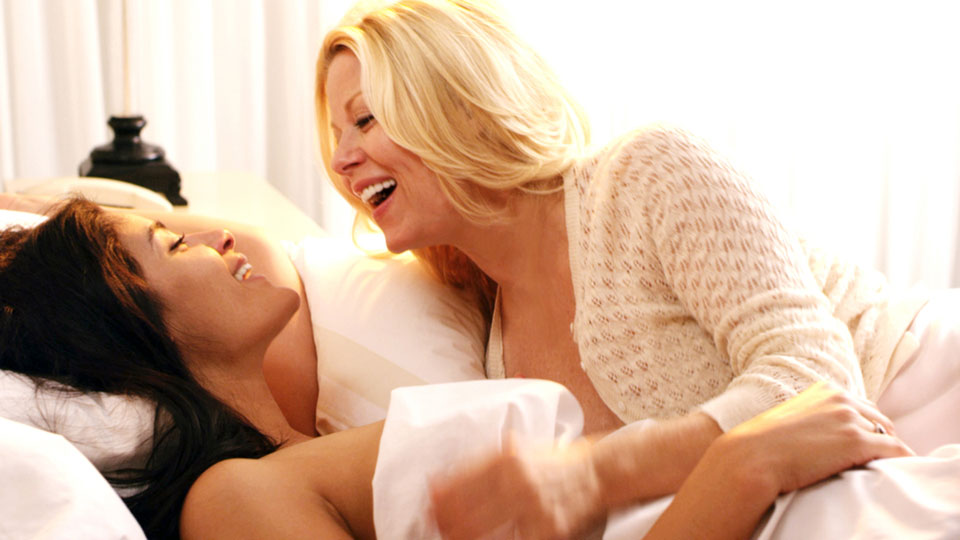 Rebecca (Barbara Niven) is a bored and unfulfilled housewife trapped in a loveless marriage with husband Mason (John Heard). On the advice of her friends she decides to pursue an affair with a female escort but when Paris (Jessica Clark) arrives at her hotel suite, she backs out and decides she can’t go through with it. As her confidence begins to grow Rebecca keeps requesting Paris’ services but will she go through with it?

A Perfect Ending is the latest movie from writer/director Nicole Conn and is an exploration of a middle-aged woman’s sexuality and sexual needs as she grows increasingly frustrated with her dismissive husband. When Rebecca and Paris first meet their exchange is frosty so it takes a bit of time for the two to work up to sleeping together. Each of the women doesn’t know that the other is hiding a secret. One of the women has a tragic past whilst the other is trying to escape the future.

There are issues with A Perfect Ending. The back-and-forth will she, won’t she drama becomes a little repetitive. We get that Rebecca is struggling with her conscience and her desires but do we really need to see the same scene over and over? Another issue is that you get a brief glimpse at the reason why Mason’s relationship with his step-daughter Jessica (Kerry Knuppe) is complicated but nothing is ever really explained or resolved with that storyline. It feels like a pointless addition to an otherwise fairly straight-forward plot.

Cast-wise the acting is fairly solid. TV staple Barbara Niven takes to the role of Rebecca with gusto and she really brings the emotional turmoil to the fore. She’s easily the best actor in the movie and she carries the majority of its weight. Jessica Clark is a little stiff in places as the beautiful but mysterious Paris. She doesn’t really engage with Niven instead giving a sense of going through the motions. Morgan Fairchild pops up for a brief but enjoyable cameo as the head of the female escort agency that Rebecca keeps contacting.

A Perfect Ending is a slightly-stretched out drama with plenty of melodrama throughout. The story could have been tighter and the characters fleshed out a little more. There’s no explanation as to why Rebecca is suddenly happy to sleep with women, having been straight her entire life. We’re supposed to just believe that she wants to have an orgasm and some red hot sex but surely she could have got that from a man? Believability is stretched over the course of the film but it does remain watchable. This is one movie that isn’t quite as perfect as its title proclaims.