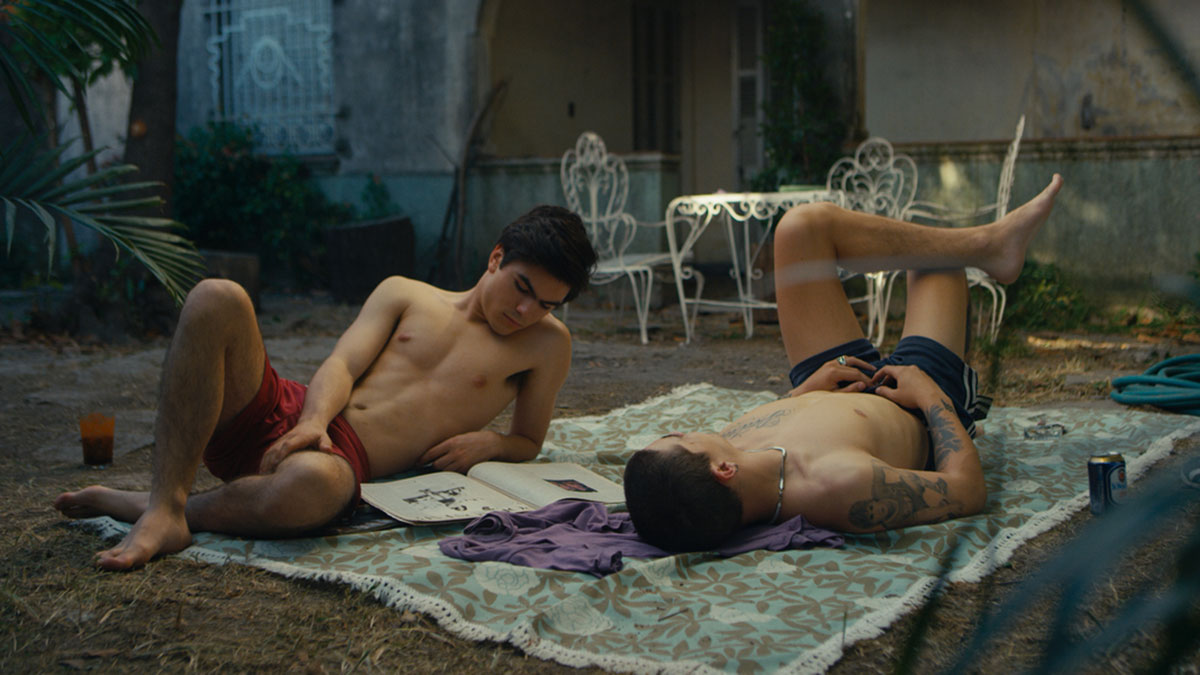 15-year-old Ezequiel (Juan Pablo Cestaro) tries to act on his burgeoning sexuality while his parents go away for a couple of weeks. His first attempt sees him rebuffed but when he meets 21-year-old Mono (Lautaro Rodriguez), he begins to fall hard and fast. Mono invites Ezequiel to spend time with him at his cousin Chino’s (Juan Barberini) villa and unbeknownst to them, they are filmed having sex. Chino uses the video tape to blackmail Ezequiel into seducing a 13-year-old boy so the encounter can be filmed and shared on the dark web for money.

‘Young Hunter’ is a dark and at times disturbing drama from film-maker Marco Berger (‘Plan B’, ‘The Blonde One’) but it’s one that hides its full intentions well throughout the first half of the film. We see Ezequiel trying to seduce a classmate, to no avail, so when he meets Mono who is very keen to jump into bed with him, it doesn’t take long before Ezequiel is head-over-heels for the tattooed skater boy. The relationship between the two picks up apace and it isn’t until Mono’s cousin Chino is introduced that you realise things about to go south, and get dark, pretty rapidly.

Following their latest hook-up at Chino’s villa, Mono vanishes from Ezequiel’s life leaving him hurt and confused. A text message from Chino reveals that he has a video of Ezequiel having sex with Mono and that’s used to leverage Ezequiel to commit an unforgiveable act, aiding to exploit a minor. Worried about his own actions getting out into the world, Ezequiel goes along with Chino’s demands with little hesitation and sets his sights on Juan Ignacio (Patricio Rodriguez), a young boy that clearly has a crush on him.

This is perhaps my one and only issue with the film. You’d think that the threat of blackmail would send Ezequiel into a spin but he barely bats an eyelid. His willingness to do what Chino asks is one of the more shocking aspects of the film and he doesn’t give any thought to what he’s doing to Juan, or even the ethics of what he’s participating in. I couldn’t quite get over the feeling that Ezequiel’s behaviour didn’t feel authentic to the character and that pulled me out of believing what was unfolding.

It’s a shame really as up until that point, I had completely bought into the story. I enjoyed the chemistry that Ezequiel and Mono had, and I was intrigued by the dark score that suggested something bad was about to happen for a good 20 minutes or so before it did. The performances of Juan Pablo Cestaro and Lautaro Rodriguez are strong too, with each actor bringing believability to their role and fostering a sizzling chemistry together on screen.

‘Young Hunter’ is, for the most part, a strong film and it does make some interesting observations about the reality of being gay in Argentina. Berger’s direction has edge and the film is definitely gripping as the story unfolds. A little more fleshing out in the second half and a stronger arc for Ezequiel would have benefitted the film, and also helped the audience to sympathise with the situation Ezequiel finds himself in.