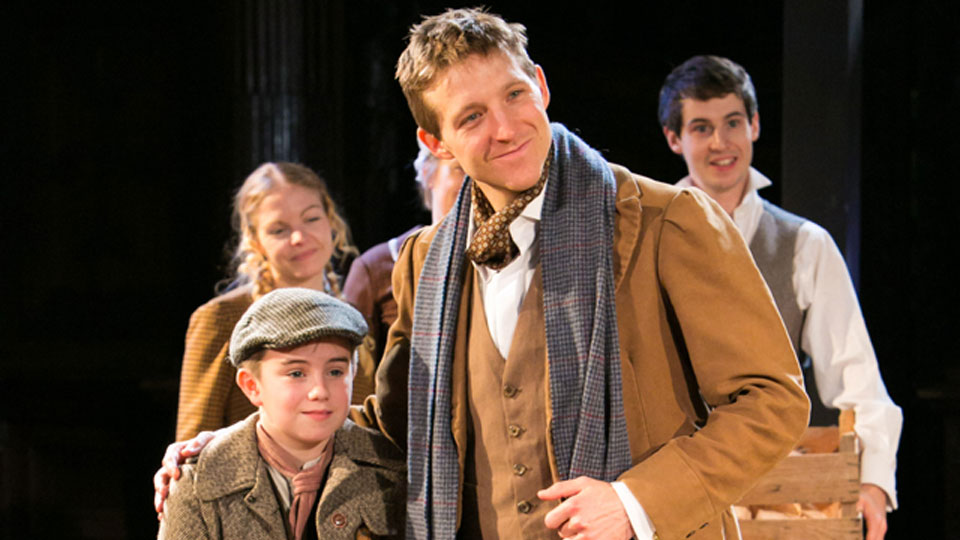 Sometimes a show’s worth its admission price alone just to enjoy the building is calls home. This much is true of Horslen and Risebero’s production of Dickens’ classic tale (possibly the one thousandth in the capital this month), albeit there is no traditional theatre to speak of; rather the history-entrenched, bygone-era grandeur of Middle Temple Hall. For the unacquainted, even the time-transportive walk to and from the hall is a pleasant surprise, and once inside, the building inspires awe and exudes warmth, interchanging with something ghastly and church-like when all the lights go out during this show’s supernatural scenes, with the high ceiling lending a useful echo. As a staging device in itself it’s a unique opportunity and the team makes good use of it.

The location throws up a few limitations of course: the hall isn’t as big as it at first appears, thus a relatively small audience sits in rows mere feet from the action observing from the left, the right and straight ahead. This undoubtedly lends an air of intimacy – even if it does sometimes overlap into school play rehearsal.

What’s more, the close proximity between cast and audience means any below par performances are magnified. Bell as Scrooge definitely makes the show with a high quality, textbook performance (you’d be forgiven for thinking he plays the role every year, so comfortable and confident is he in it) but he’s let down somewhat by some of his colleagues.

Elliot Fitzpatrick as Scrooge’s nephew Fred is endearingly smiley, and there are good efforts elsewhere to speak of, but none come close to matching Bell’s charisma, or indeed the projection of his voice. Even in such close proximity a lot of the dialogue seems whispered and the singing thin – give or take a few sweetly harmonised carols – and all of it’s drowned out by the very dodgy and clunky sound system providing the festive soundtrack, which sounds like a dusty old cassette from the 90s turned up so loud it made me jump every time it came on. I don’t wish to state the obvious but live music would’ve been infinitely better-suited to the venue.

I’ll get my few other complaints out the way quickly: some of the costumes were quite poor. The ghosts wear suspiciously homemade-looking, Blue Peter-esque chains; while the Ghost of Christmas Past’s highly flammable white gown and matching wig looked abrasive to the touch, and better suited to a cheap and cheerful panto. Furthermore Katie Lovell isn’t animated enough in the role: she’s definitely graceful and delicate, but there’s nothing imposing, otherworldly or bizarre about her performance. As a jolly Ghost of Christmas Present Tom Murphy’s performance is 100% rooted in comedy, to the giggling approval of the rest of the audience (but not me per se…); the masked, cloaked individual as the mute Ghost of Christmas Future inevitably steals the show, and it was only upon his (her? its?) arrival that I realised how much my interest had been previously waning (at two and a half hours including interval, this one’s a bit of a mission).

Actually, ignore that – it’s the angelic Ewan Gutherie as Tiny Tim who steals the show, and his innocent delivery of the play’s most immortal line is a suitably heartwarming standout moment. In hindsight and comparatively, it’s interesting to observe that the other version of A Christmas Carol of note on in London at the moment – a one man show starring Simon Callow on excellent form – lacks a certain emotional punch not having a child on stage. It’s probably unwise and unfair to draw comparisons beyond this – suffice it to say, like its competitor, Horslen and Risebero’s production is definitely worth checking out, albeit for different reasons.