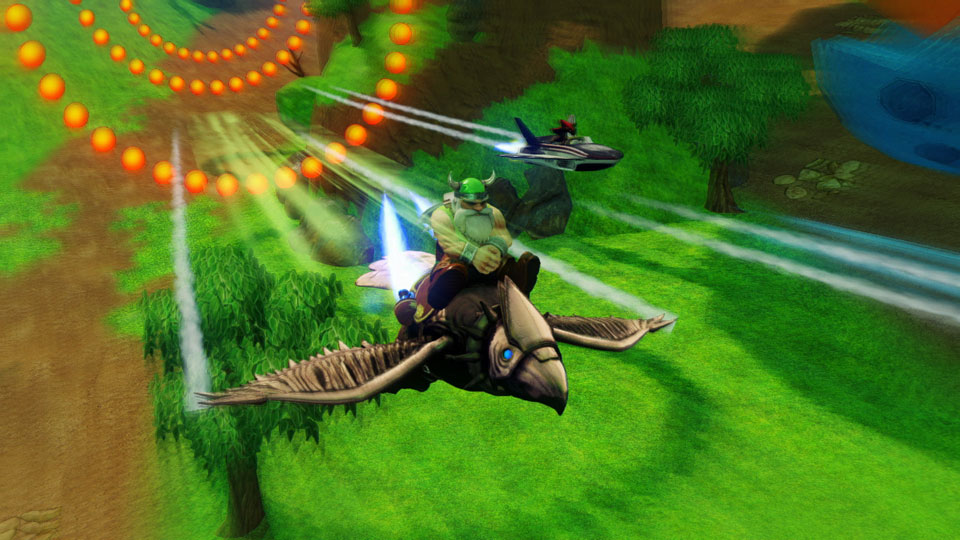 2010 release Sonic & Sega All-Stars Racing was met with critical acclaim and a lot of love from fans of the popular games publisher. It should come as no surprise then that two years on the game has been followed by a sequel:Sonic & All-Stars Racing Transformed. With developer Sumo Digital back on board, gamers have been excited to see if this new title can live up to the hype of its predecessor. Early previews and screenshots suggested it could but now the game has been released does it live up to its promise?

Sonic & All-Stars Racing Transformed takes you once again into the world of Sega offering you the chance to play as 29 different characters. All the favourites are there with Sonic, Tails and Knuckles leading the pack. There are also characters from Super Monkey Ball, Golden Axe, Nights Into Dreams and even Disney newcomer Wreck-it Ralph. Of course each character comes with their own bespoke vehicle offering a variety of different advantages and disadvantages. Remember to choose wisely to give yourself the best chance of winning the race.

For too long now racing games of this nature are compared to Mario Kart. True there’s rarely been a game that’s come close to Nintendo’s juggernaut but Sonic & All-Stars Racing Transformed could be the first to give it a real run for its money. Tired of the comparisons, Sumo Digital have worked tirelessly to ensure that this title is an altogether different beast and by golly have they succeeded. Full of adventurous tracks and with a difficulty system that really does stretch you, the game is a surprisingly inventive, addictive and exhilarating thrill-ride of an experience.

The main selling-point of Sonic & All-Stars Racing Transformed is really captured in the last word of the title – ‘transformed’. As you hurtle around the courses, all of which often take a few attempts to get to grips with, you not only drive on tracks but also glide on water and soar through the air. Every lap offers something different so you’re not just going round the same track three times. This is truly where the challenge comes in as you need to be giving your best game in order to come anywhere near the top three.

As with all racing games of this nature there are objects to collect as you race around and you can use items to get ahead by knocking other cars out of the race. These include whirlwinds and ice which can be aimed forward or backwards to take out the competition.

The game’s difficulty modes are refreshingly difficult. Easy is more akin to medium, medium closer to what you’d normally call hard and hard only for those who really love a challenge. We played mostly on medium and it’s safe to say the game is a real challenge. What’s interesting though is that this isn’t frustrating; instead it’s oddly addictive making you go back for more like a lamb to slaughter. The game makes you want to succeed and we spent hours ensuring we did.

Working your way through World Tour Mode ensures that you’ll be sufficiently challenged as you unlock new items based on how well you perform. To unlock everything, including new tracks and characters, you need to work through the difficulty levels so be prepared to replay as it takes quite a bit of perseverance. The races are also punctuated by additional challenges such as Boost and Drift, which we actually found very challenging, and Traffic Attack which requires you to weave in and out of other cars on the track.

Other modes you can dip into include single race and time trial to add a bit of longevity and further replay value. You can also take the game online for a 4-way multi-player which we’re sure will result in some very heated battles amongst friends.

Visually the game is a real feast offering so much to look at that it’s nigh on impossible to take it all in on your first attempt round a track. There are so many little flourishes and lots of detail making it one of the best racing games we’ve seen on the latest generation of consoles. There are plenty of sign-posts around the tracks to ensure you know where you’re going but be warned you need to keep your eye on the prize as it’s easy to get very distracted.

Sonic & All-Stars Racing Transformed is a surprisingly enjoyable game that easily stands on its own away from the shadow of Mario Kart. Inventive, challenging and hugely addictive the game will have you racking up the hours as you work your way through it. We admit that we expected this to be a bit of a dud but we’re big enough to admit when we’re wrong. Sonic & All-Stars Racing Transformed could well end up on our list of the best games of the year.