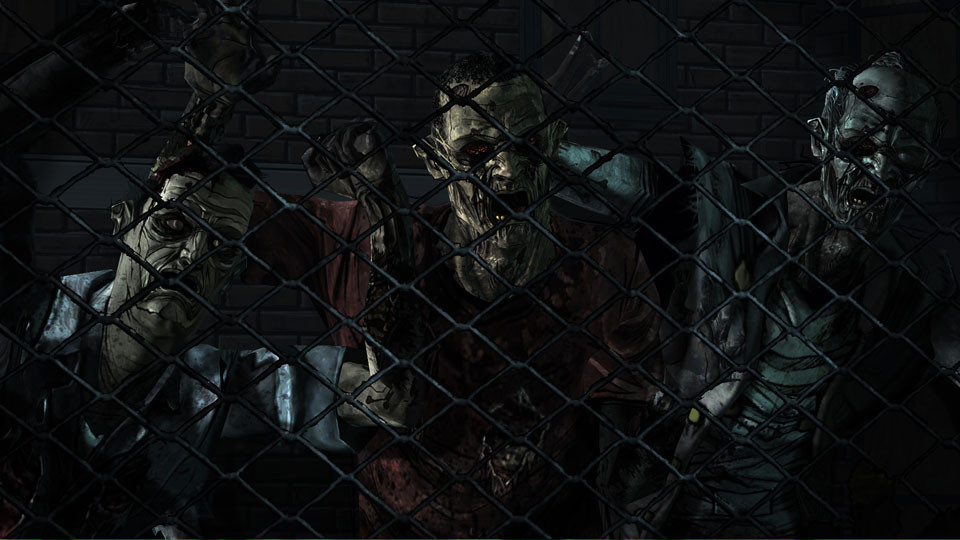 The Walking Dead game has been one of the best gaming experiences we’ve had in 2012. Telltale Games have done an incredible job of bringing to life the world that Robert Kirkman created in his comic books. The episodic approach of Telltale Games has not only been a complete winner, it’s been the first time in ages that we’ve seen the gaming community so eager for a release. The wait between instalments, whilst relatively short, has felt like forever as gamers whip themselves into a frenzy.

Episode 4: Around Every Corner picks up the story where Episode 3: Long Road Ahead as the survivors arrive in Savannah to find it’s overrun with Walkers and controlled by the mysterious Crawford community. Upon arriving in Savannah the group find an empty house to take shelter in whilst Lee and Kenny explore the city. Finding a boat they realise that could be their ticket to safety but first they need to figure out how to get it up-and-running. Of course along the way there are some serious scares, moral dilemmas and plenty of walker action. There are lots of twists and new characters too as the game hurtles along at a surprising pace.

As with previous instalments of the game expect to feel stressed out and emotionally drained by the time you reach the end. Telltale has learned how to really draw you into the game making it tougher and tougher to make the decisions required of you. From shooting more children (please stop making us kill children Telltale – we can’t cope with the emotional fallout!) through to deciding between life and death for your group there isn’t an easy decision to be made in this episode.

Something we did learn at the end of the episode is that we’re becoming increasingly more brutal as we progress through the game. At the end of the stats are displayed showing you how your decisions fit in with other gamers who have played the episode. Clearly we’re getting more desensitized as we took pretty much every opportunity to serve out a bit of death that we could. Whoops!

The way in which the story-telling unfolds is so beautiful it’s easy to forget you’re actually playing a game at times. This of course can be fatal as often you need to carry out actions in a very short time-frame to stay alive such as fighting zombies, freeing your trapped leg or jumping from rooftop-to-rooftop. There are plenty of puzzles to solve and if we’ve learned anything four episodes in, it’s that you need to talk to everyone all the time and search absolutely everything in sight.

With only one more episode left of the season we’re already struggling with withdrawal. The Walking Dead has been the standout game of the year and 2013’s first-person-shooter based on the TV series really worries us. With a game this perfect, do we really need another one? Thankfully Telltale are busy at work on a second season of their version of the game and we already know it’ll be worth the wait.

In this article:iOS, PS3, Telltale Games, The Walking Dead, Xbox 360