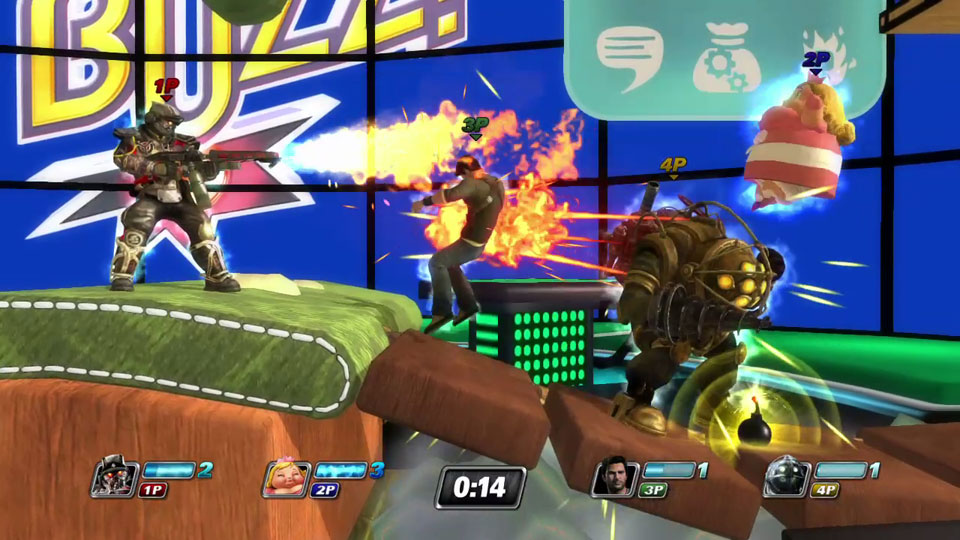 If you’ve ever been a loyal PlayStation fan and felt envious of their popular franchise Super Smash Bros. then you’ll likely be very interested in PlayStation All-Stars Battle Royale. Pitching popular PlayStation characters again each other in battle, the game pays more than just a passing nod to the success of the Nintendo classic and gives Playstation fans the chance to experience an engaging and enjoyable cross-over experience.

Essentially the new game from Sony Computer Entertainment is the PlayStation version of Super Smash Bros.featuring 20 playable characters from across the console’s most popular titles. There are some great characters included in the game. From Uncharted’s Drake through to Sackboy from LittleBigPlanet the game represents PlayStations’s rich gaming history. There are some unexpected characters in the mix too including Fat Princess from the game of the same name, PaRappa from PaRappa The Rapper and Spike from Ape Escape.

It was recently announced that the first DLC for the game will be released in early 2013 which will add two new characters – Kat from Gravity Rush and Emmett Graves from Starhawk – that can be used for any of the game’s modes.

After choosing your character you’re offered a quick and easy tutorial to show you the ropes before deciding on which mode you’d like to play. Single player Story Mode takes you through a series of levels pitching you against the other characters in the game as you battle your way to glory. After defeating all of the characters, you are pitted against a boss and must defeat it in order to win. There are a variety of difficulty settings and on the easiest, known as Hero, you’ll battle through and complete the game in around 45 minutes.

Multi-player mode offers a variety of options too. You can take the game online and choose from Timed, Stock or Reverse-Stock Modes to increase the challenge. Honestly the game is best experienced online and will provide the best experience. The single player mode is great for practising and trying out your character’s moves but the online mode will ensure you keep coming back.

Cross play is another of the game’s key-selling points. . If you buy the game for PS3 you get a free downloadable version of the game for PS Vita. You can play an online match with other players who can join via PS3 or PS Vita It’s a pretty cool feature and offers great value for gamers who like to have options.

PlayStation All-Stars Battle Royale is pretty much a button-masher. Using square, triangle or circle you carry out attacks on your opponents. As you rack up the hits your character collects AP and when the bar is full you get a level-up attack. There are three levels of level-ups, each increasing the amount of damage and destruction they cause. Each level combines the look-and-feel of the games from which the 20 characters are from. As if the opponents you are battling aren’t enough to contend with, other enemies in the background of the environment also join in the battle to make life even harder.

Our only real complaint about the game is the lazy cut-scenes. We played through as Nathan Drake on our first attempt and he did the exact same thing in each cut-scene between levels. Also the static cut-scenes that top and tail the story feel a bit dated and lazy. Visually though they look fine but a little more care and attention wouldn’t have gone amiss.

PlayStation All-Stars Battle Royale is an addictive game that offers strong replay value. Once you’ve fought your way through the single player mode you will find yourself wanting to go back and fight through again using the other characters. Online is the best way to increase the game’s longevity and will provide the toughest challenge.PlayStation All-Stars Battle Royale is a decent effort from PlayStation and it’ll be interesting to see how much future DLCs add to the game.