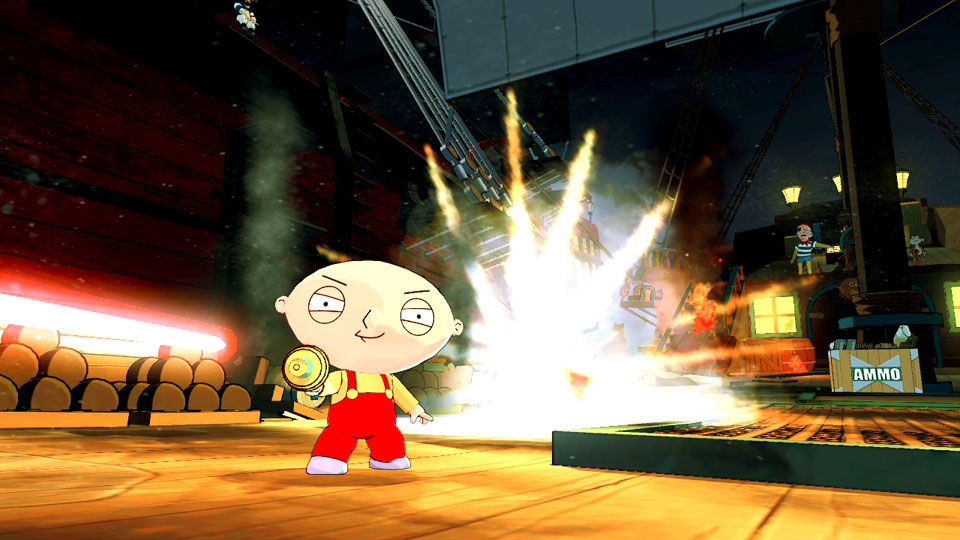 Family Guy may be one of the most popular animated shows on TV but its success hasn’t translated into an acclaimed gaming franchise as of yet. In 2006 Family Guy Video Game was released to mixed reviews and disappointment from fans and critics alike.  The game was published by 2K Games and Fox Interactive. Six years after that release, Family Guy is trying to crack the video games market again with Family Guy: Back To The Multiverse. This time round the game is published by Activision but can the games giant release a decent tie-in game based on the hit show?

Family Guy: Back To The Multiverse picks up the story from the episode Road To The Multiverse where Brian and Stewie travel around different universes hunting for Stewie’s would-be evil twin Bertram. At the beginning of the game Bertram unexpectedly returns and has built an army in order to destroy Stewie. Determined to beat him at his own game, Stewie and Brian join forces to hunt Bertram down and destroy him so that his evil plan is stopped.

It’s safe to say that the twisted and un-PC Family Guy universe has been captured in Back To The Multiverse. The environments are littered with members of the Griffin family reciting some of their classic lines and other well-known characters including Cleveland, Quagmire and Mort Goldman. The cut-scenes in the game do a great job of imitating a usual Family Guy episode and add to the overall authentic feel of the game.

First impressions of the game were great and we really thought that Family Guy was going to get the game it’s deserved for so long. Sadly once the novelty wears off you realise this is a sub-standard first-person-shooter that masks its limitations with the Griffin family humour. Essentially the game is a seek-and-find style game where you control Stewie and Brian for various missions. You are given tasks such as blowing up a party float and collecting inappropriate photos of sorority girls before having to return to the person who gave you that mission.

As you progress through the universes there is plenty of variation but the gameplay remains underwhelming. Anyone who is easily offended should steer clear. Anything and everything becomes an enemy from the Amish to Santa’s evil elves and even handicapped children.

There’s plenty of side missions to keep you busy which allow you to unlock bonus items like clips from the show and trophies. You can also collect currency hidden around the environments that allow you to buy upgrades and skins as you progress through the game. Along the way you can pick up special items too like the Giant Chicken which you can unleash to help you battle through the hordes of enemies.

One of the problems we had with the game is the inaccuracy of the shooting mechanic, especially if you’re Brian. He’s armed with a gun and headshots are the way to quickly dispose of enemies. Unfortunately it’s not a very easy or accurate thing to achieve and often you are swamped with enemies before you’ve killed a single one. Our other issue is that the enemies don’t put up much of a fight wandering zombie-like over to you so you can dispatch of them.

Once you complete the shamefully short story mode, you can opt to play the multiplayer mode which allows four players to battle locally. There are four different modes you can choose from and all of them are fairly fun. Sadly though this doesn’t make up for the game’s overall shortcomings.

Fans of Family Guy will find Back To The Multiverse has appeal but even they will admit this isn’t the game the show deserves. We’re not even all that convinced that it’s much of an improvement over the 2006 release. Whilst we admit we had fun to begin with it all wore off far too quickly and we realised we were fooled by the Family Guy charm hiding an inadequate game. Whilst it’s certainly not the worse licensed game we’ve ever played, it’s not one of the best either. If you approach this game expecting to be entertained and not much more it’ll just about be worth your time.