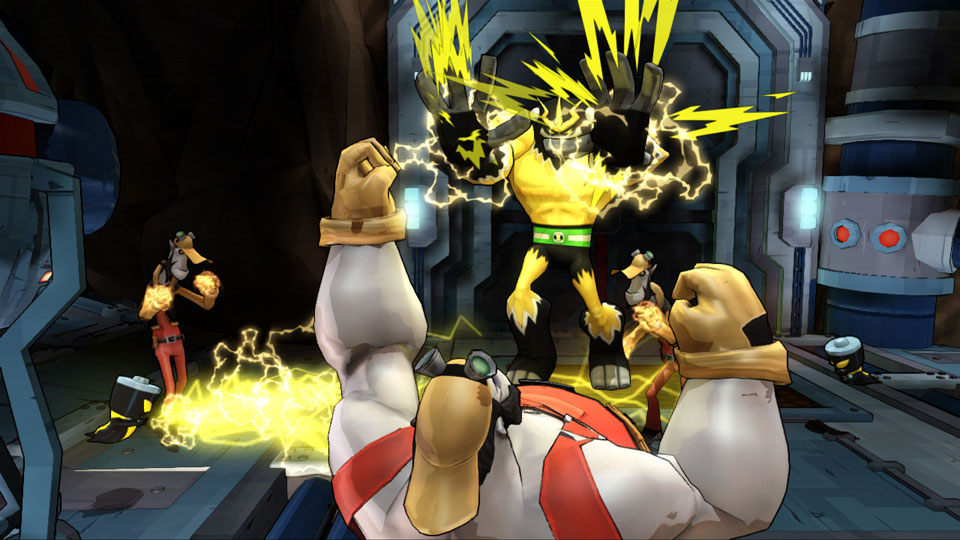 Ben 10 is a hugely popular franchise that airs on Cartoon Network. Centred on Ben Tennyson, a youngster who discovers an alien device in the woods called the Omnitrix which allows him to transform in alien species. Ben uses his new found abilities to fight crime and evil aliens. The TV series has gone through several iterations and has enjoyed spin-offs in terms of merchandise and games. The latest game is based on 2012 series Omniverse and is the seventh tie-in game to be released so far.

Ben 10: Omniverse finds Ben experiencing problems with the Omnitrix and accidentally sends his new partner Rook back in time. Rook finds 11-year old Ben ready to fight villain Malware but when Rook’s Proto-Tool is absorbed by the baddie a terrible alternative future soon follows. Now Ben and Rook must fix the past and the present and restore things to their natural order. Can they do it and defeat the evil Malware before he destroys the world?

From the sound of the premise Ben 10: Omniverse should be a whole heap of fun with its combination of puzzles and action. As the game opens you’re thrown into an overlong training simulation that is more frustrating than it is enjoyable. Level after level of fighting hordes of bad guys pass before you actually even get into the game, and by the time you do you may have become so frustrated with the vagueness of what you’re meant to do that you give up. We almost did.

It would seem that the game is pretty bug ridden in places. Half-way through the training simulation our partner in crime Rook seemed hell-bent on shooting an enemy that wasn’t actually there. This meant we couldn’t move on for quite some time as we had to replay the whole thing through two more times, doing exactly the same things before we managed to get past the bug and the next part of the training simulation opened up by way of a lit up green circle that allows you to jump up a wall and start climbing.

You could say we didn’t get off to the best of starts with the game. Following on from that the game is nothing more than a glorified button masher. Literally all you do is change from Ben to one of the aliens activated by his Omnitrix so you can beat the hell out of dozens of the same baddies progressing through the levels until you get to a boss at the end.

Whilst we understand that this game is aimed at the older kids/young teenagers market we were really disappointed with it. There’s nothing much in the way of challenges and very quickly you become very bored with beating up endless enemies in uninspiring environments.

Something we will give the credit for is the graphics. The characters all look really clean and crisp and the environments, despite lacking much in the way of excitement or detail, are clearly well designed. Sadly the graphics, and the gameplay, are let down by some truly awful camera angles which made it near impossible at times to judge distances for jumps, often leading to you falling to your death and having to go back a good 5 minutes or so in the game.

Control wise the game is pretty standard. You use the buttons to carry out attacks and special moves, the analog sticks to move Ben and the the d-pad to select your alien. There is a certain amount of customisation allowing you to assign four aliens to the Omnitrix at once which you can access by pressing the d-pad and holding it for a few seconds.

There is a co-op mode which allows another player to control Rook. This is ideal if you have two kids you want to keep entertained and does alleviate some of the frustrations we had with the AI controlling Rook in the single player campaign mode.

Ben 10: Omniverse is a pretty poor game to be honest. We can be pretty forgiving if a game excels in at least one area but this title doesn’t. If boring, repetitive, uninspired gaming is your thing then you’ll find plenty to enjoy here. If it’s not then like us you’ll soon become tired of this button mashing game designed for the easily pleased or brain dead. Kids may lap it up but it’s appeal won’t extend past the basic gamer.